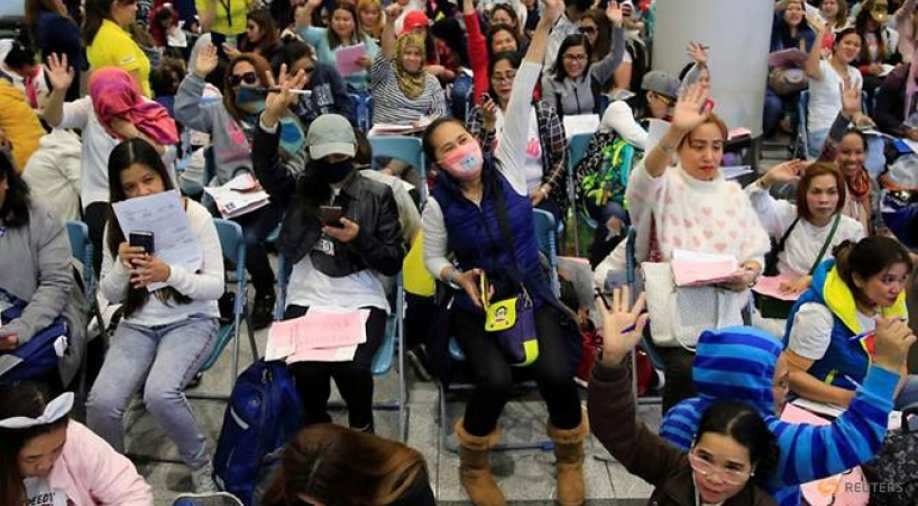 A dispute between Kuwait and the Philippines over reports of abuse of Philippine workers took a turn for the worse on Thursday with the Philippines expressing "great displeasure" about Kuwait's expulsion of its ambassador.

The conflict has been simmering for three months, sparked by reports that several Filipinos had been driven to suicide by the abuse of Kuwaiti employers.

The two countries have been working on a pact to protect expatriate workers after the Philippines banned its workers from going to Kuwait.

But on Wednesday, Kuwait ordered the Philippine ambassador to leave within a week and recalled its own envoy for consultations after embassy staff tried on the weekend to "rescue" domestic workers.

The Philippine foreign ministry on Thursday summoned the Kuwaiti ambassador to demand an explanation for Kuwait's action but was told the envoy, Musaed Saleh Ahmad Althwaikh, had left the country late on Wednesday.

"The department served a diplomatic note to the Embassy of Kuwait conveying its strong surprise and great displeasure over the declaration of Ambassador Renato Pedro Villa as persona non grata," the foreign ministry said in a statement.

"These acts are inconsistent with the assurances and representations made by the Kuwaiti ambassador on the various concerns that were brought to his attention".

Officials at Kuwait's embassy in Manila were not available for comment.

Domestic helpers account for more than 65 percent of the more than 260,000 Filipinos in Kuwait, according to the Philippine foreign secretary.

In February, Philippine President Rodrigo Duterte called on workers in Kuwait to return home after the discovery of a domestic worker's body in a freezer in an abandoned home.

The Philippines says it has protested about the detention of four of its nationals who were hired by its embassy in Kuwait to help with the "rescue" operation last Saturday, and the issuance of arrest warrants against three diplomatic personnel.

Kuwait has not commented on that publicly.

Kuwait's ambassador met Foreign Secretary Alan Peter Cayetano on Tuesday to resolve the dispute and they had agreed on measures to prevent a repeat of the incidents, the Philippines has said.

Cayetano issued an apology to Kuwait at the time for what Kuwait viewed as a violation of its sovereignty but he maintained the embassy was forced to "assist" Filipino domestic workers who sought help because some situations were a matter of life and death.

Foreign workers in many Gulf states are employed under a sponsorship system that gives employers the right to keep their passports and exercise full control over their stay.