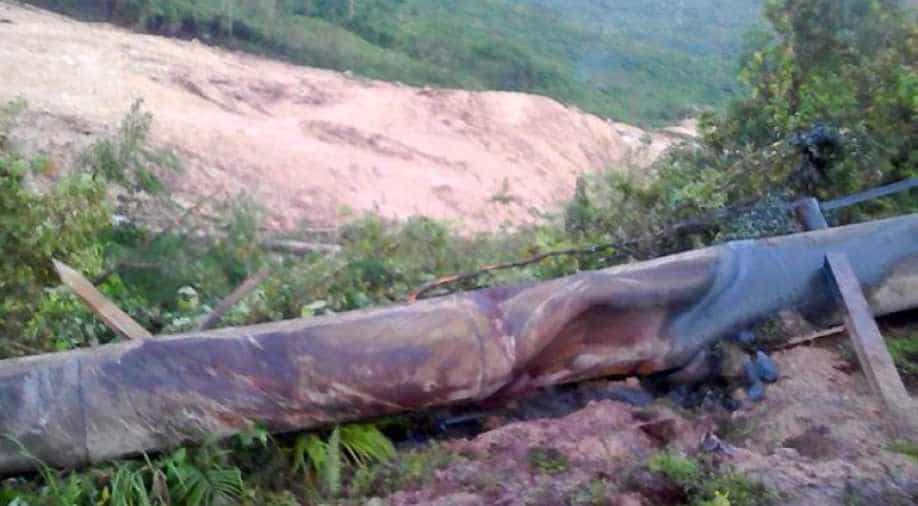 A supplied image shows a landslide and damage to a road located near the township of Tabubil. Photograph:( Reuters )

Papua New Guinea sent troops and rescue workers Monday to respond to a powerful earthquake in the Pacific nation's mountainous interior, with unconfirmed reports of fatalities and warnings of aftershocks and landslides.

Assessment teams were heading to affected areas near the 7.5-magnitude quake's epicentre, which the US Geological Survey said was some 90 kilometres (55 miles) south of Porgera in Enga province.

"It is advisable to stay out of multi-story buildings, to be aware of the potential of landslides, and to be prepared to move to open ground in the event that an aftershock is felt," the chief secretary to the government, Isaac Lupari, said in a statement.

The tremor hit at a depth of 35 kilometres around 3:45 am local time (1745 GMT Sunday), US seismologists said, adding that there was no tsunami threat.

The region is home to oil and gas production. ExxonMobil PNG said buildings at its Hides Gas Conditioning Plant were damaged but all its staff were "safe and accounted for", with non-essential employees to be evacuated.

Australian resources company Oil Search said its operations in the area were being shut down as a precaution and for damage assessment, and there were no injuries reported among its staff so far.

Felix Taranu, a seismologist at the Geophysical Observatory in the capital Port Moresby, said social media posts reported blackouts and damage to buildings at Porgera, although he was not aware of any injuries.

He told AFP the quake was felt strongly at Mount Hagen, some 168 kilometres away from the epicentre.

"It will take some time to get assessment teams out there and get a clear picture of what's happening," he added.

The director of the Geohazards Management Division, Chris McKee, told AFP he had yet to receive any reports of damage, although there was an unconfirmed report of fatalities.

"There's an unconfirmed report of some deaths from Mendi (in the Southern Highlands), but I'm not exactly aware of where the fatalities occurred, and this will have to be corroborated," he said.

The quake's epicentre is in rugged terrain about 612 kilometres northwest of Port Moresby.

USGS said earlier that some casualties and damage were possible and recent earthquakes in the area had caused landslides.

It said homes in the region were "a mix of vulnerable and earthquake resistant construction".

The impact should be relatively localised, it added.

Earthquakes are common in PNG, which sits on the so-called Pacific Ring of Fire, a hotspot for seismic activity due to friction between tectonic plates.