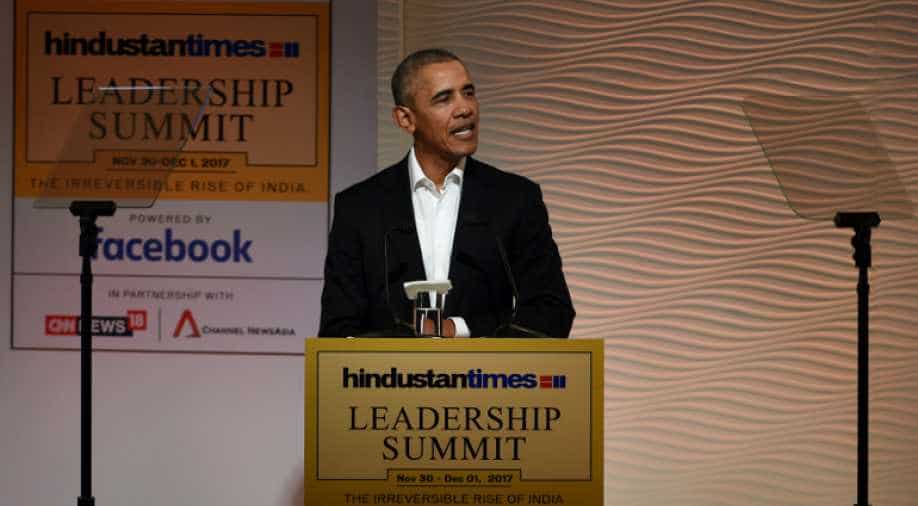 Former US president Barack Obama arrives for his address to the Hindustan Times Leadership Summit in the Indian capital New Delhi on December 1, 2017. Photograph:( AFP )

Former US president Barack Obama launched a veiled barb at his successor Donald Trump on Friday, saying there is "a pause in American leadership" on climate change.

Since leaving office in January, Obama has been relatively restrained in his comments about Trump, who frequently fires broadsides at his predecessor's policies.

But he took aim at the Republican president in a New Delhi speech over Trump's threat to leave the 2015 Paris climate accord on slashing global carbon emissions.

"It is an agreement that -- even though we have a little bit of a pause in American leadership -- is giving our children a fighting chance," Obama told a symposium organised by the Hindustan Times newspaper.

"And the good news is that in the United States, there are states, companies and universities and cities that are continuing to work to make sure that America lives up to that agreements that we made in the Paris accords," he added.

Trump has threatened several times to withdraw from the Paris accord saying it is crippling US business. He has called for the agreement to be renegotiated.

Obama would not be drawn into other questions about the US administration during his appearance in New Delhi, but the former president did attack "destructive populism from the left or the right" that he called a threat to modern democracy.

"The thing I love about America and I suspect the thing you love about India is just this cacophony of life and it throws up all kinds of variety," Obama said in response to one attempt to force a comment on Trump.

"There are political trends in American that I don't agree with and abide by but I recognise as part of a running thread in American life."

The two-term leader said he has become "obsessed" with the way news is handled and consumed, particularly by the young.

"We are more connected than ever before but ... more and more we are fitting facts to suit our opinions rather than formulating our opinions based on facts," said Obama, who was in China before visiting India, and next goes to Paris.

"This poses a great danger because democracies can't function if we can't agree on a basic baseline of what is true and what is false."