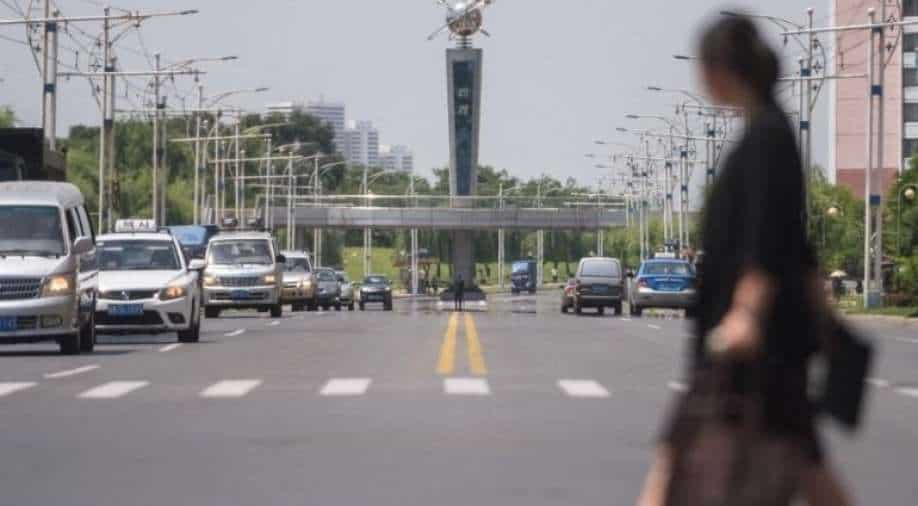 Traffic makes its way along a street during high temperatures reaching 34 degrees Celsius in Pyongyang on July 21, 2021. Photograph:( AFP )

Temperatures in the capital of the country have been higher than average this summer, hovering around 35 degrees Celsius (95 degrees Fahrenheit)

Pyongyang sweltered on Wednesday as state media issued warnings about a heatwave across North Korea.

This summer the country has recorded higher-than-average temperatures that are hovering around 35 degrees Celsius (95 degrees Fahrenheit) in the capital.

Residents strolling Pyongyang's main streets on Wednesday beat the heat with umbrellas and hand-held fans. Some cooled off by eating a bowl of shaved ice with sweet toppings, a traditional summer dessert.

Despite the sizzling climate, everyone sweated it out in face masks to prevent the spread of COVID-19.

Most homes in impoverished North Korea do not have air conditioning, with data suggesting that only a quarter of the population has access to electricity.

State media has issued a series of warnings about the dangerously high temperatures over the past week.

"Officials and working people in all the fields and regions across the country have turned out in the campaign for preventing the damage from fierce heat and drought," the Rodong Sinmun newspaper said last week.

The paper added that forestry officials should be on the lookout for wildfires, and agricultural workers should watch out for pests and other heat-related crop damage.

A health official told state-run KCTV last week that North Korea expected another heatwave at the end of the month.

Natural disasters tend to have a greater impact on the country due to its weak infrastructure, while deforestation has left it vulnerable to flooding.

A series of typhoons last summer triggered floods that damaged farmland and destroyed thousands of homes.

Last month, North Korean leader Kim Jong Un admitted that the country's food supply situation was "getting tense" due to the lingering typhoon damage, and called for steps to minimise the impact of natural disasters.