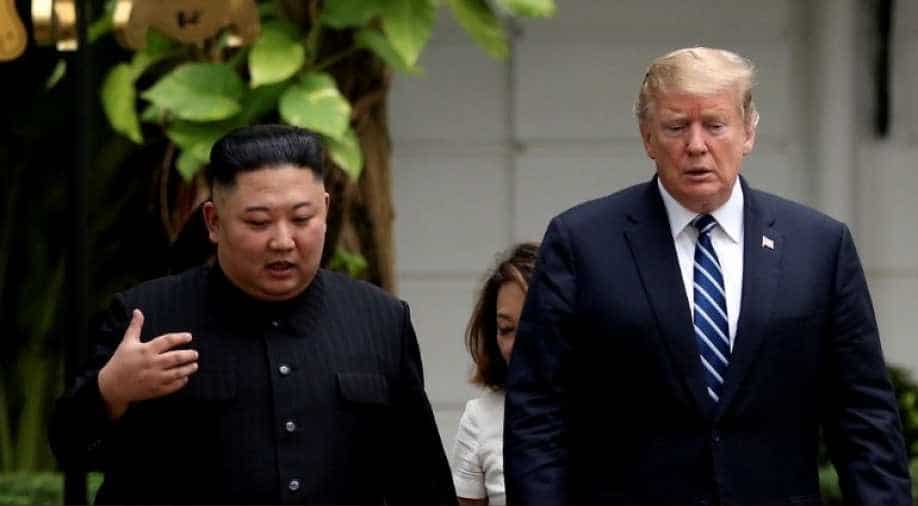 North Korea's leader Kim Jong Un and US President Donald Trump talk in the garden of the Metropole hotel during the second North Korea. Photograph:( Reuters )

Kim has said a third meeting would be possible only if Washington adopted a more flexible approach, setting a year-end deadline.

Time was running out for the United States to formulate a new strategy to revive denuclearisation talks, a senior North Korean diplomat said on Thursday, as a US envoy for North Korea is set to visit South Korea ahead of President Donald Trump's trip.

Negotiations have been stalled since the second summit between Trump and North Korean leader Kim Jong Un in the Vietnamese capital of Hanoi in February collapsed over differences between the US calls for complete denuclearisation and Kim's demands for sanctions relief.

Kim has said a third meeting would be possible only if Washington adopted a more flexible approach, setting a year-end deadline.

The United States is in behind-the-scenes talks with North Korea over a possible third summit and has proposed reopening working-level negotiations, South Korean President Moon Jae-in said on Wednesday.

Stephen Biegun, the US special envoy for North Korea who has led working-level talks, is scheduled to arrive in Seoul on Thursday ahead of Trump, who is due in South Korea at the weekend after visiting Japan for the G20 summit.

The United States and North Korea have held working-level meetings in the demilitarized zone (DMZ) separating the two Koreas in the run-up to the Hanoi summit, but it was unclear whether Biegun will attend such talks this time.

Kwon Jong Gun, director-general for US affairs at the North's foreign ministry, said the United States continues to speak of dialogue while "becoming more and more desperate in its hostile acts."

He did not elaborate, but a foreign ministry spokesman said on Wednesday that the recent US extension of sanctions against North Korea was an act of hostility and an outright challenge to the first summit between Kim and Trump in Singapore last year.

"The dialogue would not open by itself through the United States repeatedly talks about resumption of dialogue like a parrot without considering any realistic proposal that would fully conform with the interests of both sides," Kwon said in a statement carried by Pyongyang's official KCNA news agency.

"If the United States is to move towards producing a result, time will not be enough."

In contrast, US officials have raised hopes for a restart of official talks following a recent exchange of letters between Trump and Kim.

US Secretary of State Mike Pompeo on Sunday called a fresh round of nuclear talks a "very real possibility," following a letter sent to Kim by Trump.

KCNA has said Trump's letter had "excellent content" and Kim would "seriously contemplate" it, without elaborating.

Trump is expected to send "some kind of message" to the North from the DMZ during his trip, South Korean Prime Minister Lee Nak-yon said on Thursday.

Trump tried to go to the DMZ, where Kim and Moon held a historic first summit last year, on a 2017 visit to South Korea, but heavy fog prevented it.

Trump said on Wednesday he would not meet with Kim during his stay in the South and US officials have declined to comment on whether Trump will travel to the DMZ.

Kwon said any new talks should be led by a "counterpart who has a good sense of communication."

The North has accused Pompeo of making "gangster-like" demands and urged a replacement with someone "more mature" while lauding the rapport Kim has built with Trump.

Wednesday's statement by the North singled out his recent remarks that more than 80 per cent of the North Korean economy had been affected by sanctions as "reckless" and "sophistry."

Biegun is scheduled to meet with his counterpart Lee Do-hoon and other Seoul officials on Friday to explore ways to reopen nuclear talks, a South Korean foreign ministry spokesman said.

But there are few signs that the United States and North Korea are any closers to a deal, with both saying they are open to talks but calling for the other side to change policy.

Tension has mounted since the breakdown of the Hanoi summit. The North tested new short-range missiles in May and Washington imposed fresh sanctions and seized a North Korean ship suspected of illicit coal shipments.

Seoul's unification minister said on Thursday that inter-Korea commercial projects that could channel millions of dollars a year to Pyongyang could be leveraged to boost nuclear talks.

But the North said Seoul will never mediate between Washington and Pyongyang.

"As is globally known, the DPRK-US relations are moving forward on the basis of the personal relations" between Kim and Trump, Kwon said, using the initials of North Korea's full name, the Democratic People's Republic of Korea.

"Therefore, there will be no such happening where anything will go through the South Korean authorities."