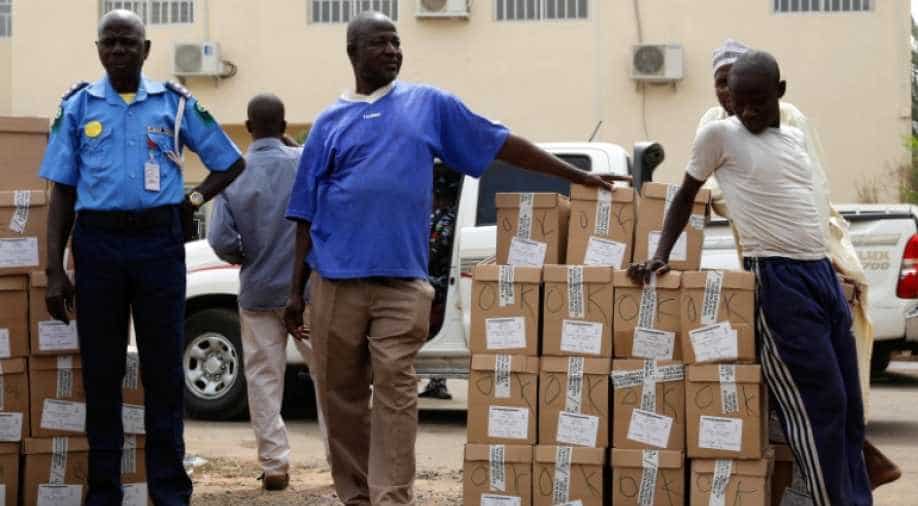 Ad-hoc staff wait to load election materials onto a truck for distribution in Yola, in Adamawa State, Nigeria. Photograph:( Reuters )

The Independent Electoral Commission (INEC) announced the postponement just hours before polls were due to open at 0700 GMT, blaming logistical difficulties.

The head of Nigeria's electoral commission on Saturday said politics played no part in the last-minute decision to delay presidential and parliamentary elections by one week.

The Independent Electoral Commission (INEC) announced the postponement just hours before polls were due to open at 0700 GMT, blaming logistical difficulties.

But the two main political parties have claimed the delay was part of a plot to rig the results.

INEC chairman, Mahmood Yakubu, rejected the assertion. "Our decision was entirely taken by the commission," he told a news conference in the capital, Abuja.

Yakubu, who has earlier maintained the electoral body was "good to go" for Saturday's vote, said the delay was "good for our democracy and for our country".

He explained that organising elections in Africa's most populous nation of some 190 million people were an "enormous undertaking" and "operational challenges" were to be expected.

Just over 84 million people had been registered to vote at nearly 120,000 polling units across the country on Saturday, and at governorship and state assembly elections on March 2.

Ballot papers and results sheets were ready but a combination of factors, including last-minute legal challenges to candidacies, bad weather and fires, hampered distribution.

That raised the prospect that not all polling units would be open for voting at the same time around the country.

A staggered election "would harm public perception of elections as free, fair and credible", Yakubu said.

The INEC chairman said a 24-delay was considered but restrictions on movement and church services would have hindered turn-out.

A 48-hour delay was also ruled out because technicians said more time was needed to reconfigure the 180,000 or so machines that "read" biometric voter cards to a different date.

The reconfiguration would take place between Sunday and Thursday, he added.

"As chairman of INEC and on behalf of the commission, we take full responsibility for what happened and we regret any inconvenience our decision might have caused," he added.