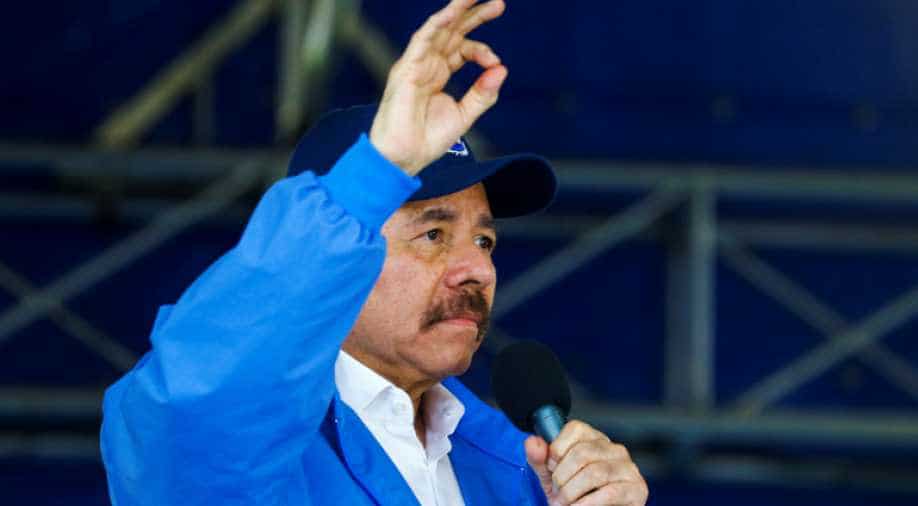 Already subject to US sanctions himself, Ortega's vice-president wife Rosario Murillo and national security advisor Nestor Moncada were hit with sanctions on November 27 as Washington stepped up the pressure on a regime accused of human rights abuses and authoritarian rule.

Rights groups say at least 320 people have been killed in a brutal government crackdown launched in response to the escalation in April of street protests, initially against a now-ditched pension reform.

Washington has approved measures that will see it oppose international loans to Nicaragua until Ortega enacts reforms that guarantee free and fair elections, strengthens the rule of law, combats corruption and protects basic rights such as free speech.

The US measures "are aimed at provoking the social implosion of the government's foundation, both at a central and municipal level," said sociologist Oscar Vargas.

He says the sanctions would create "a scenario in which the economy would fall into a deep recession."

Growth projections for this year have been slashed to just one per cent from 4.9 per cent prior to the outbreak of trouble in April.

The United States is the Central American country's most important trading partner, the destination of more than half of its exports and the source of 50 per cent of remittances sent home by Nicaraguans living abroad.

Retired general Hugo Torres says Ortega cannot afford to ignore the US pressure, including Washington's assertion that Nicaragua is a threat to US security. To do so would be to sign his own political death warrant.

The US measures "are hugely serious because they are expressed in economic ways as they will subject the country and Ortega's regime to all types of economic sanctions," Torres told a local newspaper.

Ortega first came to power in 1979 as a leader of the leftist Sandinista rebels that toppled the US-backed Somoza family dictatorship. After leaving office in 1990 he returned to power in 2007.

Nicaragua's influential Catholic Church has been attempting to mediate between the regime and opposition, which wants Ortega to resign -- but the president walked away from those talks in May and has stubbornly refused to resume them.

In the meantime, he is increasing pressure on opponents that he describes as criminals and terrorists.

"Until now Ortega's reaction to the protests and international pressure has been to increase repression and harden his position, to such an extent that he's established a police state and virtual state of siege," said Torres.

"We hope he'll react (to US pressure) and understand that if he continues down this path, the only thing that will happen is he will bury his party and every possibility that his regime survives politically."

While the Nicaraguan army has so far kept out of the crisis, Torres says it "should be very worried and advising (the government) to stop this maelstrom of repression and reestablish democracy."

For former foreign minister, Francisco Aguirre, Nicaragua is "going through a major crisis in its relationship" with the United States, and "that's extremely worrying."

But Vargas isn't expecting the president to change. "Ortega is living in a parallel universe," he recently wrote in a study on Nicaragua's economy, society and politics.

Vargas feels that "only a long, hard and heroic popular mobilization" could force out the president.

"We're living in a permanent state of terror," he said.

Instead, he sees the 73-year-old leader "feeding the conflict, something we could call the Cubanization of Nicaragua."

The "Bolivarian axis" -- which includes Venezuela and Cuba, a trio that US National Security Advisor John Bolton has described as a "troika of tyranny" -- has a "shared strategy that the government must resist" outside pressure "even if the population pays the consequences," Diaz said.

Nicaragua has branded the US sanctions as imperialist interference with Murillo vowing that the "revolution will reach 40" next year. "We're unbreakable!"