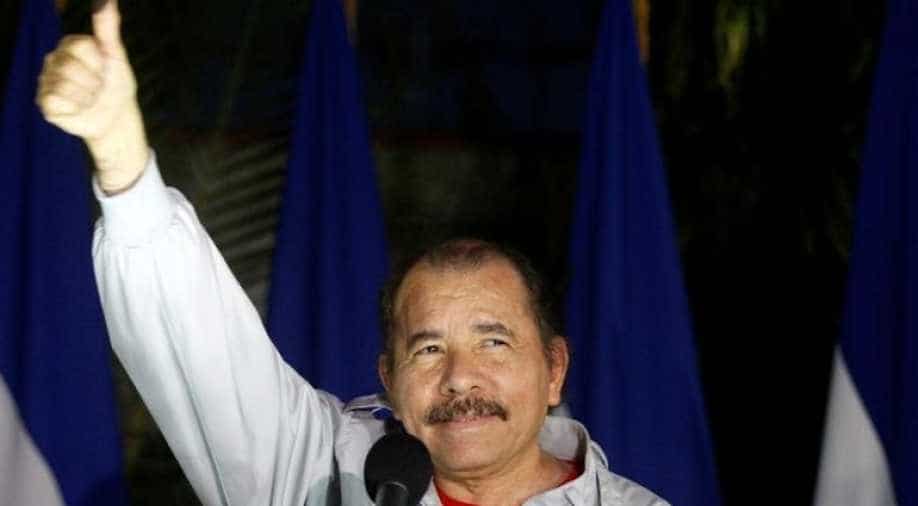 Daniel Ortega has garnered 72.1 per cent of votes, the electoral board said Photograph:( Reuters )

Nicaraguan leader Daniel Ortega is on course to winning his third consecutive term as president of the Central American country, electoral officials said on Sunday on the basis of early poll results.

The former guerilla fighter, 70, who is contesting with his wife, Rosario Murillo, as vice president, gathered 72.1 per cent of votes, with 66.3 per cent of polling stations counted, officials of the electoral board told Reuters.

Ortega's main opponent, the center-right Liberal Constitutionalist Party (PLC) candidate Maximino Rodriguez, was a distant second with 14.2 per cent of votes, the board said.

"I'm euphoric, thanking God for this opportunity, this triumph, so the people continue to reap benefits," said Ana Luisa Baez, 55, a widow and mother of four who runs a small store out of her home. "Thanks to the (Sandinista) revolution, I have faith I'll be able to keep moving forward, because we are backed by a good government."

Ortega's business-friendly approach is way different from many once-dominant Latin American leaders, whose popularity has dipped in the last few years following poor economic growth. Ortega has also forged alliances with the business sector, helping Nicaragua to achieve average growth rates of 5 per cent in the past five years, Reuters reports.

The first lady's social programs are also believed to be a major reason for the governing party's popularity.

However, over the years, Ortega has been accused by opponents of manipulating the political system for staying in power, especially after his Sandinistas pushed for constitutional changes that ended presidential term limits in 2014.

He's been accused of setting up a "family dictatorship" by appointing relatives to key posts. Murillo's vice presidential bid is viewed as further evidence of Ortega's power grab, given the rumours over his supposed health problems.

Ortega emerged as leader of the Sandinista movement that toppled dictator Anastasio Somoza in 1979. He led the country during the 1980s, when a civil war against US-backed Contra rebels killed around 30,000 people and unleashed an economic crisis.

His popularity dimmed after he lost in a 1990 election, but he made a political comeback by winning the presidential election in 2006.

Despite the United States and international organizations having voiced concern about Ortega's stranglehold on power, the World Bank acknowledges that poverty has fallen almost 13 percentage points under his rule.

A substantial part of those gains have been funded by Venezuelan petrodollars that have underpinned social programs, helped private business and slashed energy costs, Reuters reports.

Ortega and US President Barack Obama have maintained a relatively cordial relationship, a far cry from a leftist firebrand to a diplomat who maintains ties with a Cold War enemy.

Democracy, however, remains a thorny issue between the two countries.

A US bill known as the Nica Act seeks to condition financial assistance to Nicaragua on improvements in democracy, human rights and battling anti-corruption, seen by Ortega and his government as "interference" from Washington.

After casting his vote on Sunday, the one-time foe of the United States government, took a dig at his country's northern neighbour just days before US voters decide on their next leader.

"Now it's us, the Nicaraguans, who decide, because we no longer have a single Yankee general here," Ortega said, referring to years of US interference in the country's affairs. "It's we Nicaraguans who count the votes, this is a sovereign democracy."