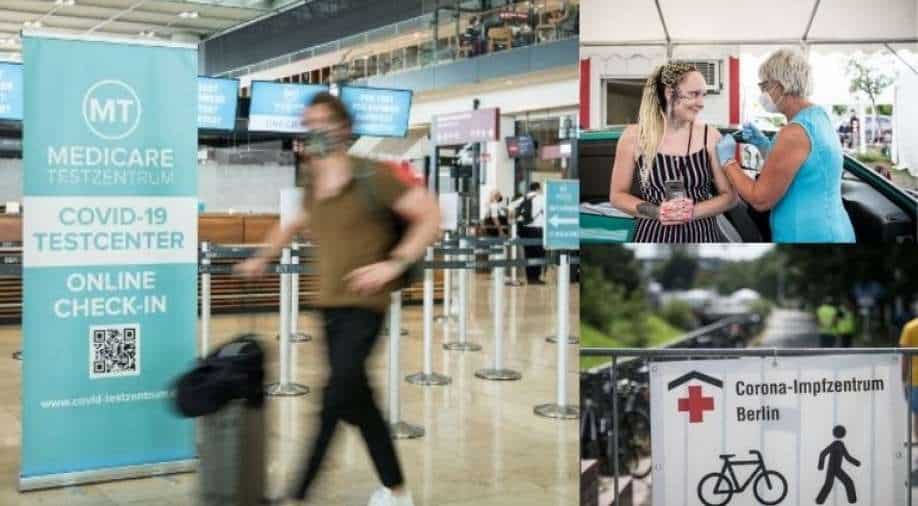 After an emergency meeting, the WHO warned in a statement that “preliminary evidence suggests an increased risk of reinfection with this variant” in people who have already had COVID-19. In keeping with the practice of naming variants for letters of the Greek alphabet, it dubbed the new one omicron

The world reacted with alarm Friday to the highly mutated new coronavirus variant discovered in southern Africa, as the United States, the European Union and nations across the globe imposed new travel restrictions, financial markets swooned, and visions of finally emerging from the pandemic started to dim.

Just two days after the world learned of the variant, the World Health Organization officially labeled it a “variant of concern,” its most serious category — the first since the delta variant, which emerged a year ago. The designation means that the variant has mutations that might make it more contagious or more virulent, or make vaccines and other preventive measures less effective — although none of those effects has yet been established.

After an emergency meeting, the WHO warned in a statement that “preliminary evidence suggests an increased risk of reinfection with this variant” in people who have already had COVID-19. In keeping with the practice of naming variants for letters of the Greek alphabet, it dubbed the new one omicron.

The WHO and scientists on multiple continents cautioned that very little is known about the omicron variant or about whether the dangers it poses will justify the fears it is stoking. South African scientists announced its existence Wednesday, and the number of cases definitively identified, all of them within the past three weeks, is still small, under 100.

But the swift global responses demonstrated that after nearly two years of facing accusations that they were too slow and timid in tackling the pandemic, many policymakers would rather risk overreacting to a new threat than underreacting.

On Friday, Israel, Singapore, several European nations individually, and then the European Union as a whole, the United States and Canada followed the lead set by Britain Thursday night, temporarily barring foreign travelers who have recently been in South Africa or any of several neighboring countries. As with past travel bans, countries are allowing their own citizens and permanent residents to return home if they test negative for the virus, with some requiring additional testing and quarantine after arrival.

After a briefing by his top advisers on the pandemic, including Dr. Anthony Fauci, President Joe Biden made the decision to bar travelers from South Africa, Botswana, Zimbabwe, Namibia, Lesotho, Eswatini, Mozambique and Malawi starting Monday.

“I’ve decided that we’re going to be cautious,” Biden told reporters in Nantucket, Massachusetts, where he spent Thanksgiving with his family. “We don’t know a lot about the variant except that it is a great concern and seems to spread rapidly.”

Officials warned that even with quickly enacted travel restrictions, omicron, like past variants, is certain to spread and reach the United States, although the Centers for Disease Control and Prevention said in a statement Friday night that no cases had been identified as yet.

“It’s going to buy us some time,” Fauci said in an interview. “It’s not going to be possible to keep this infection out of the country. The question is: Can you slow it down?”

“You don’t want to say don’t worry, and you don’t want to say you’ve got to worry yourself sick, because we’re gathering information rapidly,” Fauci said, adding, “Even though the numbers are still small, the doubling time is pretty rapid and the slope of the increase is really rather sharp.”

The administration is already in talks with vaccine makers about the possibility that they may have to reformulate the shots to respond to the variant, according to another administration official, speaking on condition of anonymity to describe private conversations. But first, scientists would need to determine that existing vaccines really are less effective against omicron, a process that is expected to take weeks, if not longer.

Stock indexes and oil prices tumbled around the world, as news of the variant and travel restrictions — coming in the economically vital holiday season — raised fears of yet more financial damage caused by the pandemic. On Friday, the S&P 500 index logged its worst day since February, falling 2.3%, and European stock markets fell 3% to 5%. Benchmark oil futures fell 13% in the United States and 11% in Europe.

Scientists have identified about 50 mutations in the genome of the omicron variant that set it apart from other variants, far more than in any previous variant, including more than 30 on the spike protein that the virus uses to bind to host cells.

Changes in the spike protein are particularly worrisome because immune system antibodies that fight the virus — whether they are induced by infection or by vaccination — primarily recognise and target the spike.

But a leading Italian virus expert, Roberto Burioni, said people should not panic, writing on Twitter, “Substantively NOTHING is known about the new variant.”

In addition to South Africa, the variant has been found in a handful of people in Botswana, Belgium, Israel and Hong Kong, but experience with previous variants suggests that when the first cases are identified, it is likely more have gone undetected.

“This variant has been detected at faster rates than previous surges in infection, suggesting that this variant may have a growth advantage,” the WHO said.

In South Africa, officials and business owners reacted bitterly to the international response. The nation put its sophisticated disease surveillance and research systems to good use, and quickly shared the results with the world, only to have its transparency repaid with damaging travel bans.

“Perhaps our scientists’ ability to trace some of these variants has been our biggest weakness,” said Lindiwe Sisulu, the tourism minister. “We’re finding ourselves punished for the work that we do.”

“We had been on the British red list, and we worked our way out of it, and with no notification we find ourselves back on the red list,” she told a national television station.

Health officials in Africa suggested that increased screening at points of entry, or even longer quarantine periods, would have been a better alternative.

“This will just discourage different countries for sharing information which might be very important for global public health,” said Thierno Balde, the WHO’s incident manager for COVID response in Africa.

The response to the omicron variant was especially quick and sharp in Europe, once again the epicentre of the global pandemic, where fights over vaccines and social restrictions have grown increasingly harsh.

Reported coronavirus cases have soared in Europe from about 700,000 a week in early September to 2.6 million a week. The surge began in the less-vaccinated countries of Eastern Europe, but then spread to highly vaccinated nations to the west that had thought they would not be vulnerable and were caught off guard.

The countries that currently have the world’s highest case rates for their populations are all European — several of them about six times as high as the US rate.

South Africa, whose last coronavirus wave peaked in July, has recently reported case rates far below the worldwide average. But last week the rate more than doubled from the week before.