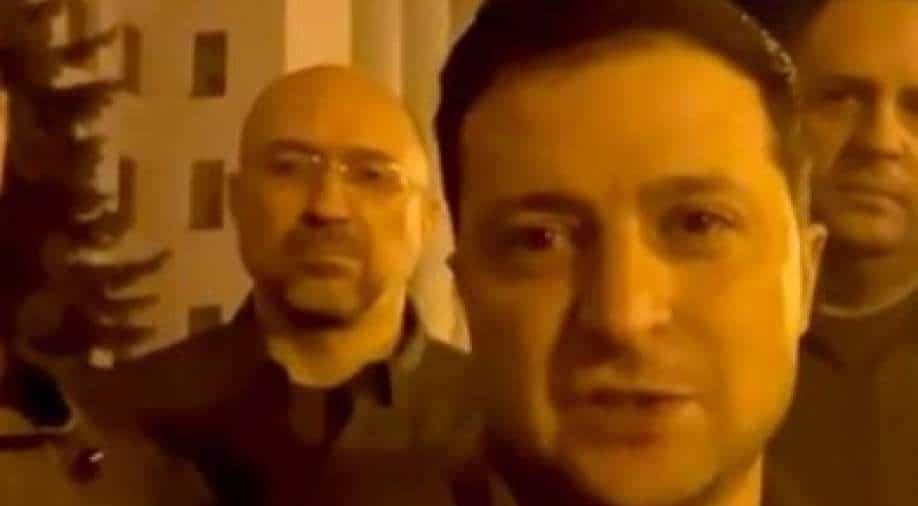 Ukraine President Zelensky said 'we are all here' in Kyiv in a Facebook video post Photograph:( AFP )

Reports say the whereabouts of Ukrainian President Volodymyr Zelensky is unknown. Zelensky had said earlier that Russian 'sabotage' groups had entered Kyiv amid heavy fighting with Russian forces in the capital city.

Amid heavy fighting in the Ukrainian capital, President Volodymyr Zelensky in a video message said: "My family is the number two target. They want to destroy Ukraine politically by destroying the head of state."

US press secretary Jen Psaki sought to defend Zelensky saying: "Obviously going after a head of state would be a significant, horrific act by the Russian leadership."

Zelensky on Friday had said he is "target No-1" for Russian forces amid heavy fighting inside Kyiv between Ukrainian forces and Russian troops.

"He is still in Ukraine, proudly and courageously facing up the Russian attack,” Psaki added. US President Joe Biden had earlier spoken to the Ukraine president as Russian forces continued to pound capital Kyiv for the third consecutive day.

Also Read in Pics: How are hypersonic missiles different, is it the new 'wonder weapon'?

"This night will be more difficult than the day. Many cities of our state are under attack," Zelensky said in a video message. Ukraine's military said it had downed  "two enemy targets" while identifying a SU-25 helicopter and a bomber in the separatist eastern region.

The military said it had "knocked down" a Russian transport plane near Vasylkiv city which is located southwest of Kyiv.