'My cousins are killing one another': War in Ukraine splits mixed families 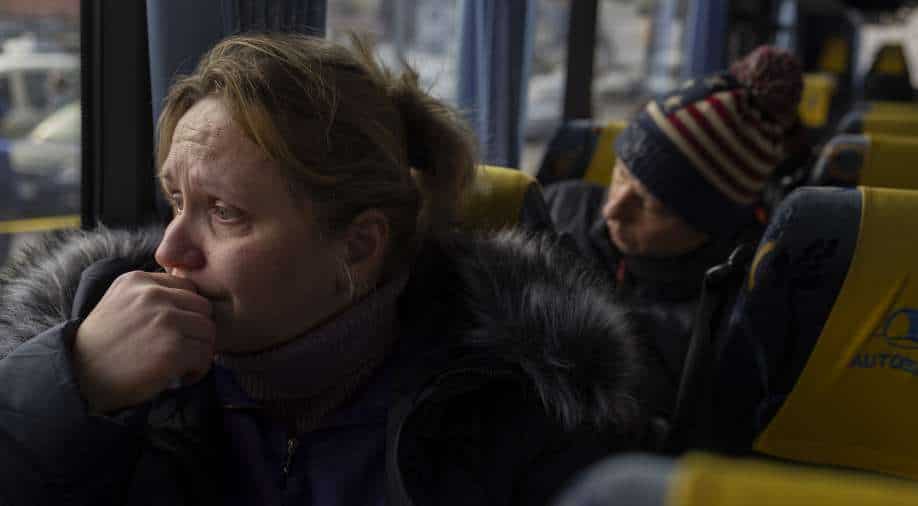 The war has already created family rifts and prompted fears among some that relatives will harm each other in battle.

As a child in the Russian city of Volgograd, Nina Ryakhovskaya grew up with her younger cousin, sliding in their socks on their grandmother’s wooden floor, pretending to be figure skaters and confiding secrets and crushes to each other.

Now 40, and living in Kyiv with her Ukrainian husband, Ryakhovskaya recently called her cousin in Volgograd to tell her the Russians were invading Ukraine. Her cousin did not believe there was an invasion and told her that Russia was only conducting an operation against Nazis there, she said.

“It makes me feel like we are distant forever,” Ryakhovskaya said in a video call from a house in the countryside near Kyiv, where she fled with her husband and 7-year-old son as the Russian invasion unfolded. “I can’t forgive them. I can’t forgive that they are part of this.”

Because of their countries’ complex and intertwined history, many Ukrainians and Russians have relatives from both sides of the border who are now standing on opposite sides of the war. The conflict triggered by President Vladimir Putin of Russia has gone beyond the front lines and into the families of many Ukrainians and Russians, as well as the diasporas of those peoples around the world.

The war has already created family rifts and prompted fears among some that relatives will harm each other in battle.

“I have cousins on both sides,” said Dan Hubbard, a professor at the University of Mary Washington in Virginia. “I dread them killing each other.”

Hubbard, 64, was raised in the United States by his mother, who was Russian, and his Ukrainian great-grandmother. He fondly recalled how the two women used to share homemade cabbage pie while playing cards and making fun of each other’s accents.

Today, some members of his family live near Moscow and others are outside of Kharkiv, Ukraine’s second-largest city, which is now under siege by Russian forces. Both his Russian and Ukrainian cousins are old enough to enlist in the army. Hubbard says he has been trying to avoid the news because it causes him too much pain.

“I feel for both sides because Russian boys don’t even know why they are there,” he said. “My cousins are killing one another because of a madman’s fantasy.”

Zoya, a 25-year-old assistant at a cosmetics company in St. Petersburg, is the daughter of a Russian mother and a Ukrainian father. She grew up near Moscow, but her paternal grandmother spoke to her in Ukrainian, read her Ukrainian poems and sang her Ukrainian songs.

“This conflict is like when your mom and dad have a fight,” said Zoya, who, like several people interviewed for this article, asked to be identified only by her first name for fear of repercussions in Russia. “You can’t choose one of them because you love them both.”

In a 2011 poll, 49% of Ukrainians said they had relatives in Russia, and there were 2.6 million Ukrainian citizens living in Russia in 2015, according to one study.

With a Russian mother and a Ukrainian father, Alona Cherkassky grew up in Moscow but spent her summers in Odessa, Ukraine, where her grandparents lived. As an adult, she prided herself on her double heritage. But with the Russian invasion, it has become a source of pain.

“It feels like a very personal attack,” said Cherkassky, 45, who now lives in London.

Cherkassky’s cousin Georgy, 44, a Russian animator, lives in Moscow with his wife, who is from Odessa, the seaside city where the Russian navy came ashore during the invasion. He said that his wife did not separate her Ukrainian identity from her adoptive Russian one until recently.

“Of course since they are bombing her homeland, she is thinking of herself more as Ukrainian,” Georgy said.

The kinship bond between Russians and Ukrainians that many people of mixed origin described has also been emphasized by Putin, who has repeatedly pointed out that the countries share a common heritage. But while for many this closeness made the invasion even more devastating, for Putin it was a justification for it.

“On the one side, our president says we’re all one people,” said Georgy, “but on the other side, he’s bombing them.”

Olena, who has a Russian mother and a Ukrainian father, said her parents were sheltering underground from Russian shelling in the eastern Ukrainian region of Sumy, near the Russian border.

Olena said she grew up in both Ukraine and Russia, speaking a mix of both languages, reading literature and listening to a cross-border mix of pop music.

Now she lives in France, and she reads her children Russian and Ukrainian fairy tales and sings lullabies to them from both countries. But since Russia’s invasion, her children have started to ask which country is theirs.

“How can I say I am more Russian or more Ukrainian?” she asked. “I never needed to.”

Some people torn between the two countries expressed their distress on social media.

“My son is almost 6. His mother’s country of birth bombs his father’s,” Alexander Kolyandr, who identified himself as an analyst for an investment bank in Moscow, wrote on Twitter.

“My mom’s from Russia, my dad’s a Russian speaker from Ukraine,” Evan Gershkovich, a Moscow correspondent for The Wall Street Journal, wrote on Twitter on the war’s first day. “Today still isn’t computing even after weeks of watching this develop in real-time.”

In the house where she is staying in the Ukrainian countryside, Ryakhovskaya said she was freezing because when she left Kyiv she was in shock and took only summer clothes. She has now become scared of the dark. At night, she and her family only use headlamps so as to not attract the attention of Russian troops by turning on the house lights.

The fallout with her family in Russia has only added to her distress.

“It’s even harder because you lose your relatives,” she said. “They don’t believe a person they know from their childhood,” she added. “They believe the TV.”