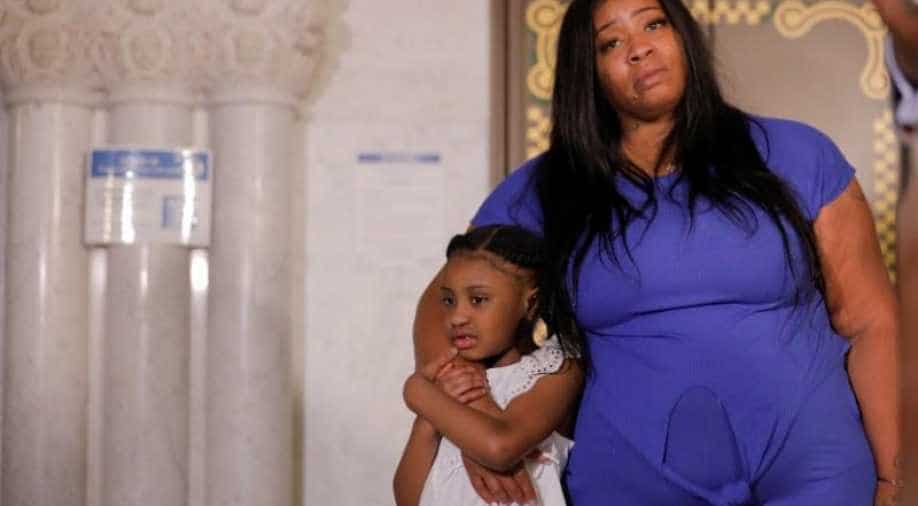 With her 6-year-old daughter Gianna clinging to her, Roxie Washington told reporters she wants all four officers involved in Floyd’s death to pay for the killing, which has sparked protests across the US and the world.

The grieving mother of George Floyd’s daughter on Tuesday demanded justice for him, even as the state of Minnesota launched a civil rights investigation into the Minneapolis Police Department.

She said he was a good father who did not deserve to die face down on the pavement, pinned under the weight of three police officers.

George Floyd, a black man, died while being arrested in Minneapolis last week after a white officer pressed his knee into his neck for several minutes, even after he stopped moving. Floyd's death has ignited protests across the country.

With her 6-year-old daughter Gianna clinging to her, Roxie Washington told reporters she wants all four officers involved in Floyd’s death to pay for the killing, which has sparked protests across the US and the world.

"I want justice for him because he was good, no matter what anybody thinks," Roxie Washington told reporters at a press conference in Minneapolis on Tuesday.

"He was good and this is the proof that he was a good man," she added, pointing at their daughter.

“At the end of the day, they get to go home and be with their families. Gianna doesn’t have a father. He will never see her grow up, graduate. He will never walk her down the aisle.”

Derek Chauvin, the then-police officer, seen kneeling on Floyd's neck for nearly nine minutes, has been charged with third-degree murder and second-degree manslaughter in Floyd's death. Three other officers involved were fired but have not been charged.

Floyd had moved from Texas to Minneapolis looking for a better life. Even from afar, Washington said, Floyd was supportive of their daughter and would always talk about taking care of her.

When their daughter, Gianna, asked why people on TV kept saying her dad's name, all Washington could say was, "...he couldn't breathe."

The attorneys representing Washington said they want the world to have another image of Floyd besides the video of his altercation with police.

George Floyd's hometown of Houston held a memorial march for him on Tuesday, where attendees recounted a "gentle giant" whose legacy had helped the city largely avoid the violent protests seen elsewhere in the United States.

As many as 60,000 people gathered downtown to honour Floyd.

Meanwhile, on Tuesday, Gov Tim Walz and the Minnesota Department of Human Rights announced the filing of the formal civil rights complaint at a news conference.

The investigation into the police department's policies, procedures and practices over the past 10 years will now determine if the force has engaged in systemic discrimination toward people of color, and root it out.

The Minneapolis Police Department has faced decades of allegations of brutality and other discrimination against African Americans and other minorities, even within the department itself. Critics say its culture resists change, despite the elevation of Medaria Arradondo as its first black police chief in 2017.