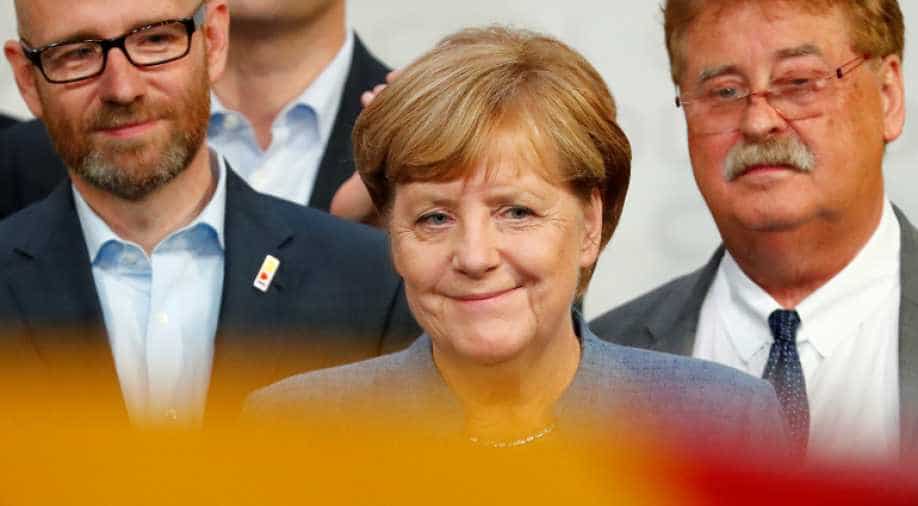 Germany's Angela Merkel began the tough task of trying to build a coalition government on Monday after securing a fourth term as chancellor in an election which saw her support slide and the far right making significant gains.

Damaged by her decision two years ago to allow one million migrants into Germany, Merkel's conservative bloc secured 33 percent of the vote, losing 8.5 points, its lowest level since 1949. Her coalition partners, the centre-left Social Democrats, also slumped and said they would go into opposition.

Voters flocked to the anti-immigration Alternative for Germany (AfD), the first far-right party to enter the German parliament in more than half a century. However, the AfD hardly had time to savour its third-place showing before it fell into internal bickering.

Many Germans see the rise of the AfD as a similar rejection of the status quo as votes for Brexit and Donald Trump last year. But Germany's political centre held up better than in Britain and the United States as more voters have benefited from globalisation and most shun the country's extremist past.

Merkel's party remained the biggest parliamentary bloc and Europe's most powerful leader said her conservatives would set about building the next government. She said she was sure a coalition would be agreed by Christmas.

Martin Schulz, the leader of the Social Democrats that have governed with Merkel since 2013, said his party had no choice but to go into opposition after dropping to a post-war low of 20.5 percent.

"We have understood our task -- to be a strong opposition in this country and to defend democracy against those who question it and attack it," Schulz told party members to applause.

Investors were unsettled by the prospect of a weaker Merkel at the head of a potentially unstable coalition with the pro-business Free Democrats (FDP) and Greens, dubbed "Jamaica" as the parties' black, yellow and green colours mirror its flag.

They are also worried that months of coalition talks could distract from negotiations with Britain over its divorce from the European Union and efforts to push further integration. The euro and European stocks slipped on Monday.

Klaus Wohlrabe, an economist at the Munich-based Ifo economic institute, said new elections could not be excluded and the result could stoke uncertainty as German business confidence deteriorated unexpectedly in the weeks before the election.

Many Germans were alarmed by the rise of a party likened by the foreign minister to Nazis. Protesters threw stones and bottles at police outside the AfD's campaign party in Berlin on Sunday evening.

But just a day after the election, the AfD showed signs of fracturing as co-leader Frauke Petry, one its most prominent faces, said she would not sit in parliament with AfD members. It was not immediately clear why she was making such a move.

The election also exposed divisions in Merkel's conservatives, with her allies the Bavarian Christian Social Union (CSU) demanding a shift to the right to win back voters lost to the AfD.

The CSU, which lost heavily to the AfD in Bavaria, faces regional elections next year.

"They will try their best to recover lost ground on the right side of the political spectrum. Going into a coalition in Berlin with the Greens and the FDP will make this more difficult," said Janis Emmanouilidis from the European Policy Centre.

CDU Saxony Anhalt premier Reiner Haseloff called for the party to do more to address voter fears over immigration policy, while other party members warned against shifting to the right.

Leading AfD candidate, Alexander Gauland, gave a foretaste of the hostile new tone expected in parliament, saying it would "hound" Merkel and "get our country and our people back".

"Our companies need clear signals. Now it's all about averting damage to Germany as a place of business," Dieter Kempf, president of the BDI industry association, said.

After the SPD ruled out another "grand coalition", Merkel's only other choice is to pursue a three-way partnership between her conservatives, the FDP and the Greens.

Such an alliance could be fragile due to deep differences on issues from migrants to tax, the environment and Europe.

In particular, the prospect of Merkel sharing power with the FDP is likely to create problems for deeper integration of the eurozone as proposed by French President Emmanuel Macron.