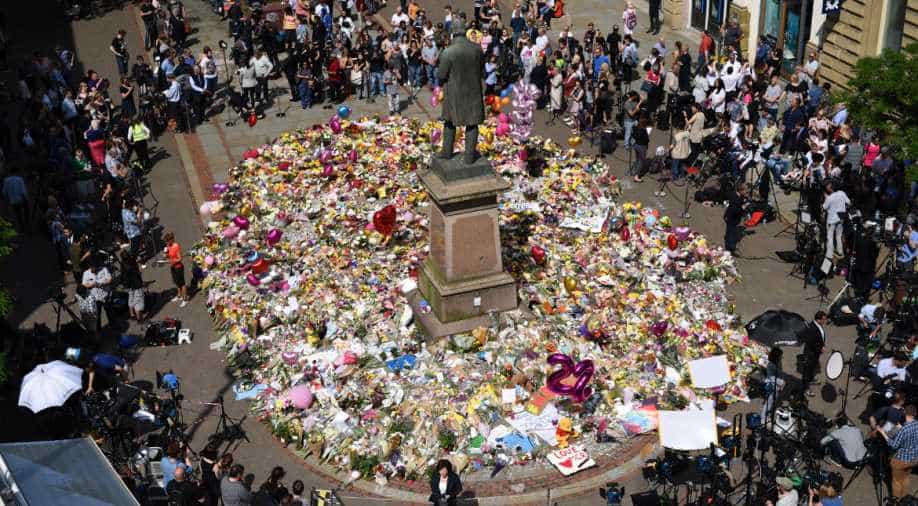 People gather to see flowers and messages of support left around a statue of Richard Cobden in St Ann's Square in Manchester, northwest England on May 25. Photograph:( AFP )

A total of 14 people are in detention in Britain and Libya over Monday's suicide bombing at a pop concert in the English city of Manchester ||A 25-year-old man was?arrested in Old Trafford, to the east of the city on Sunday

A total of 14 people are in detention in Britain and Libya over Monday's suicide bombing at a pop concert in the English city of Manchester by a British-born man of Libyan origin.

A 25-year-old man was arrested in Old Trafford, to the east of the city on Sunday.

A teenage boy and a woman arrested by British police this week have since been released without charge, leaving 12 in British custody who were arrested "on suspicion of offences contrary to the terrorism act".

In Libya, the father and brother of the bomber, Salman Abedi, are also in detention.

Abedi reportedly returned from Libya only a few days before the attack which killed 22 people, including seven children under 18, but police are still trying to establish the extent of his wider network.

Here are the details of the arrests so far:

Police arrest a 24-year-old man in the Chorlton area of south Manchester near where Abedi is believed to have lived. Police had earlier given the man's age as 23.

An eyewitness told AFP that police shouted at the man to lie on the ground before taking him away. British media indicated that the man is highly likely to be Abedi's older brother Ismael.

The brother was described in media reports as "outgoing" compared to Salman, who was "very quiet".

Police arrest three more men in south Manchester aged 18, 21 and 24, a short walk from the house where Abedi lived.

Omar Alfaqhuri, a neighbour who lives just in front of a house that was raided, said he saw "a massive deployment of police forces" during the nighttime arrest and a man he named as "Adel" handcuffed and taken away.

"They blocked the whole street," he said, adding that his neighbours were a "nice quiet family".

- An 18-year-old man, who police said was carrying a suspect package, is arrested in Wigan, a town near Manchester. No further details were given about him.

- Another man, 22, is arrested in the town of Nuneaton in central England, widening the British police probe beyond areas in and around Manchester.

- Libya's Deterrence Force, which acts as the police of the Tripoli-based Government of National Accord, arrests Abedi's father Ramadan, adding that it had already arrested his brother Hashem on Tuesday.

A spokesman said that the brother was aware of Abedi's attack plan and that both men belonged to the Islamic State group, which claimed responsibility for the attack.

Abedi's father reportedly protested his son's innocence in the hours before his arrest.

- In Manchester, a 34-year-old woman is arrested by police in an apartment block in Blackley, in the north of the city. She is later released without charge.

- A 16-year-old boy is arrested in Withington, south Manchester. He is later released without charge.

- A 38-year-old man is arrested in Blackley.

A 30-year-old man is arrested in Moss Side, an area of Manchester which has been associated with social deprivation and gangs.

A 44-year-old man is arrested in Rusholme, in the south of the city.

Two men aged 20 and 22 are arrested following a raid, involving a controlled explosion, at an address in Cheatham Hill, north Manchester.

A 25-year-old man is arrested in Old Trafford, to the east of the city.