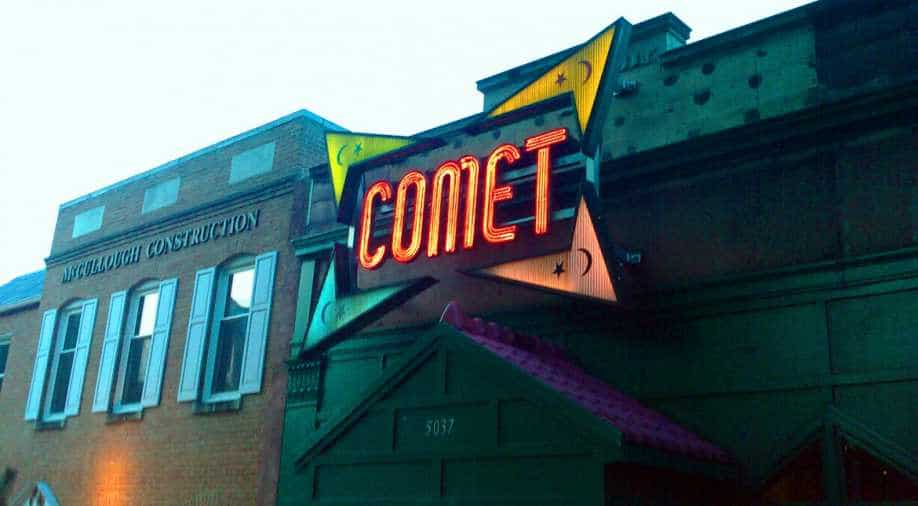 The outside of the Comet Ping Pong. Washington, DC. Photograph:( Others )

A man was arrested Sunday after entering a pizzeria armed with an assault rifle, which he pointed at an employee and discharged inside the restaurant, DC police told the Washington Post.

Nobody was injured in the incident, but in all the panic several businesses went into lockdown as police swarmed the neighbourhood at around 3 pm, the Washington Post reported.

The police say that Welch has been charged with assault with a dangerous weapon, the Washington Post reports.

The 2016 US election saw a burst of fake news stories. In one, high-ranking memebers of the Democratic Party were involved in a pedophilia ring that operated out of the basement of Comet Ping Pong, a family-friendly pizza restaurant in Washington DC.

One Comet Ping Pong employee speculated that Welch was looking for the so-called underground tunnels, where alt-right and pro-Trump conspiracy theorists on 4chan and Reddit expressed belief that the Democrats tortured children, the Daily Beast reports.

The conspiracy seized on John Podesta's leaked emails which apparently contained a "pizza theme", which was taken to be a secret code with private meanings.

Since the election, the restaurant's owner has received hate mail and death threats via text, social media and Facebook, reports the New York Times.

Employees have had to quit the Comet Ping Pong in fear after their personal information was shared online, the Daily Beast reports. Reddit has since closed those groups, as per their policy of not sharing private information.

The fake news was sufficiently high-profile in early November that retired General Michael Flyyn, who Donald Trump has since selected to be his national security adviser, shared it on Twitter, asking readers to judge its veractiy for themselves.

Articles appeared on Facebook and on sites like The New Nationalist and The Vigilant Citizen, which ran headlines like, "Pizzagate: How 4Chan Uncovered the Sick World of Washington's Occult Elite", the New York Times reported.

Various news outlets debunked the claim that an occult sex ring was operated by Clinton and other Democrats out of the pizzeria basement.

The owner, James Alefantis, told BBC Trending that the accusation is impossible for a very basic reason: "We don't even have a basement."