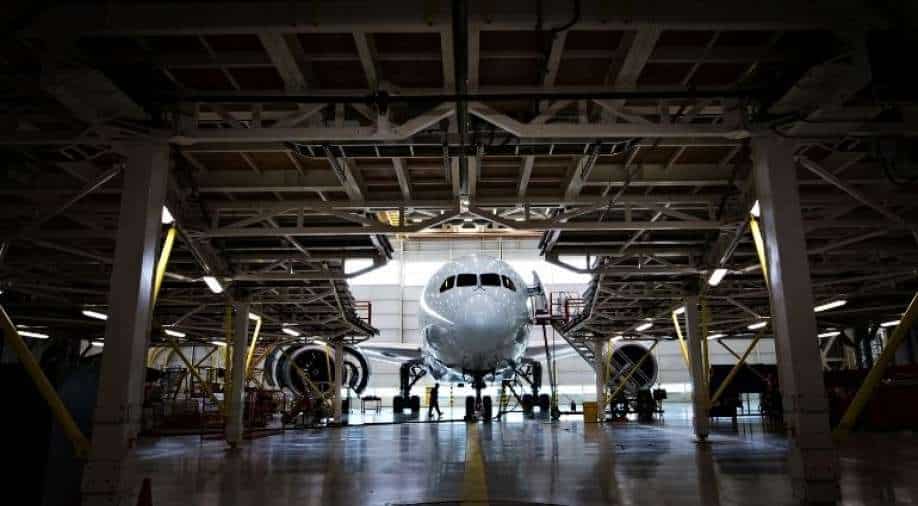 Air Canada’s maintenance facility at the Toronto airport in Jan. 22, 2021. A consortium of some of Canada’s largest companies, representing 350,000 employees nationwide, has launched a rapid testing program aimed at reopening their economy. (Tara Walton © 2021 The New York Times) Photograph:( The New York Times )

The program, believed to be the first of its kind among the Group of 7 industrialized nations, has already attracted the attention of the Biden administration

As frustration mounts in Canada at the leaden weight of lockdowns and the glacial pace of vaccinations, a consortium of some of the country’s largest companies has launched a rapid testing program with the aim of protecting their 350,000 employees and publishing a playbook for businesses across Canada on how to reopen safely.

The program, believed to be the first of its kind among the Group of 7 industrialized nations, has already attracted the attention of the Biden administration.

The 12 companies, including Canada’s biggest airline and grocery chain, have worked together for four months, creating a 400-page operating manual on how to run rapid antigen tests in various work settings. They began piloting the tests in their workplaces this month and expect to expand the program to 1,200 small and medium-sized businesses.

They also plan to share their test results with government health authorities, greatly raising test counts in the country and providing an informal study of the virus’s spread among asymptomatic people.

“It’s like wartime — people get together to do something that’s in the interest of everybody,” said Marc Mageau, senior vice president of refining and logistics with Suncor Energy, the country’s largest oil producer, which introduced the testing to its employees this month.

The program faces some inherent challenges — after an outbreak last year at the White House, antigen tests became known for generating both false negatives and a false sense of security. They are also in short supply in Canada, with some experts arguing they should be reserved for schools and nursing homes rather than nonessential businesses.

While vaccines are considered the world’s best weapon for defeating the pandemic, most experts believe it will take months, if not a full year, for Canada to reach vaccination levels that allow workplaces to safely return to their pre-COVID operations.

Canada is in the grip of a second pandemic wave that has driven infections to record levels and deaths to about 19,800. In response, many parts of the country are in lockdown, with restaurants, theaters and nonessential retail shops closed.

The Canadian economy has contracted about 5% during the pandemic. Some industries, like real estate and manufacturing, have done well, but employment has plummeted at others, like entertainment and hospitality, which depend on public crowds.

“Think about downtown Toronto: No one is there anymore. Entertainment — it’s all stopped,” said Joshua Gans, a professor of strategic management at the University of Toronto who acted as an adviser on the project and is the author of “The Pandemic Information Gap: The Brutal Economics of COVID-19.”

“The time has come to work out how to actually reopen the sectors that have been closed,” he said.

The companies in the consortium were brought together in the spring by Ajay Agrawal, founder of the University of Toronto’s Creative Destruction Lab, which helps science and technology startups. They were inspired by the most Canadian of muses: author Margaret Atwood.

“How soon can we have a cheap, buy-it-at-the-drugstore, self-administered test?” Atwood asked last May during a virtual meeting of business leaders and others tasked with brainstorming ideas for economic recovery during the pandemic.

The problem, the group posited, was the “information gap” — since there was no way to tell who might be an asymptomatic carrier, everyone was treated as a potential threat.

“That would be a game changer,” she said.

Realizing that the government was overwhelmed by the health crisis, the group decided to take on the task itself, forming a consortium led by Creative Destruction Lab.

The group focused on antigen tests because of their speed, price and utility: They can produce results in minutes, don’t require a laboratory and, in Canada, can cost between $5 and about $20.

But they are less accurate, and produce more false negatives, than the gold-standard polymerase chain reaction, or PCR, tests, which can cost 20 times as much. The three antigen tests approved for use in Canada flag between 84% and 96.7% of the people infected with the virus.

For that reason, many experts in Canada and elsewhere initially argued it was wiser to expand PCR testing. But, as the pandemic stretched on and the country failed to reach its testing targets, that thinking has changed, said Dr. Irfan Dhalla, co-chair of the Canadian advisory panel on testing and screening for COVID-19, which recommended the country increase the use of rapid tests.

“A rapid antigen test is clearly better than no test at all, as long as it is not used as a free pass,” Dhalla said. “Whether it’s a workplace or a school, you still have to wear a mask and you still have to physically distance as much as you can.”

Consortium members hope in the long run that the testing program will help reduce infection rates enough to permit a return to crowded restaurants and boardroom meetings. But in the meantime, they plan on using the tests as an added layer of protection — on top of wearing masks, engaging in social distancing and pre-screening employees so those with symptoms stay home.

The companies in the consortium are also testing their employees twice a week, increasing the chances of picking up positive cases.

“Everyone is looking for a silver bullet. We’ve realized it doesn’t exist. This isn’t it either,” conceded Laura Rosella, an associate professor of epidemiology at the University o

In September, more than 100 employees from the consortium began working together, at their companies’ expense, to draft a plan. Two retired generals volunteered to help manage logistics.

In November, the group registered as a nonprofit organization called CDL Rapid Screening Consortium, with each company contributing $230,000 for operational costs.

Working in teams, the employees researched some 50 different antigen tests emerging around the world, analyzed what was needed for a screening program — from staffing to the number of gowns — and estimated the overall cost.

The resulting 400-page operating manual includes everything from an example of an employee invitation to join the program and a standard consent form, to the detailed shopping list of materials required to run a program.

One hurdle has been acquiring tests. They have had to get them from the government because they are not widely available in Canada yet, and there is a great demand from schools and nursing homes.

“Let’s get tests there first,” Dhalla said, referring to schools, nursing homes and essential workplaces. “As we gain experience, then we can talk about getting people back to work, where working from home is an option.”

In January, five of the companies began to pilot the program in settings as different as pharmacies and radio stations. So far, some 400 employees have volunteered, and almost 1,900 tests have been conducted. Only three have come back positive, according to Sonia Sennik, executive director of the Creative Destruction Lab and the enthusiastic quarterback of the project.

“They didn’t go into the workplace and potentially spread something,” Sennik said. “We broke the chain of transmission three times.”

The companies have found the program reduces employee anxiety not only about coming to work, but also about returning home each day, she said.

“I feel relief,” said Mohamed Gaballa, an Air Canada employee who completed the test during a break at Toronto Pearson International Airport. Within 15 minutes, this popped up on email: “Your screening result is negative. You may carry on with your day.”

“This has been a missing piece in Canada for far too long,” said Dan Kelly, president and CEO of the Canadian Federation of Independent Business, which represents 110,000 small and medium-sized businesses.

Small businesses face many more hurdles to implement a program like this, even given the leg up from a 400-page manual, he said. There is the cost of the tests, but more important, of the staff to administer them.

Kelly imagined the program wouldn’t work at restaurants and busy stores — places where unscreened customers far outnumber screened employees, unless the plan was to test them too. But, in kitchens, small warehouses, small manufacturing shops and offices, “this testing could be quite helpful,” he said.

“Under normal circumstances, the idea of small companies doing employee-based testing for anything would be a fantasy,” said Kelly, who sits on the federal government’s industry advisory group on COVID-19 testing. “But in this case, given the degree of desperation to get or stay open among small-business owners, there is a potential appetite for it.”