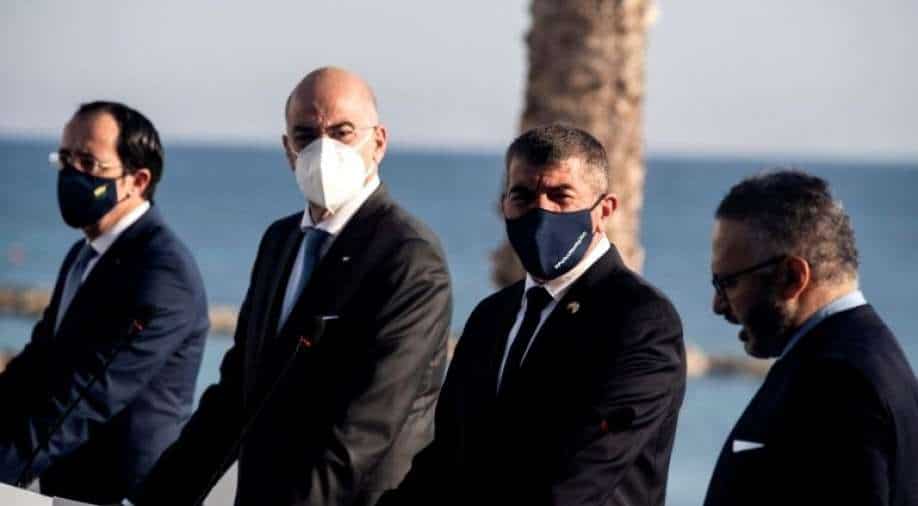 Discussions in Cyprus focussed on ways to enhance joint action in facing the fallout from the COVID-19 pandemic, medical research and the distribution of vaccines

Israel, the UAE, Greece and Cyprus said they would seek to deepen their cooperation in fields ranging from energy to fighting COVID, saying budding ties could change the face of a region more synonymous with conflict.

"The evolving web of regional cooperation is creating a new narrative, one that is cracking the glass ceiling of the prevailing (one) of our neighbourhood as a region of turmoil, conflict and crisis," said Cypriot Foreign Minister and host Nikos Christodoulides.

The UAE and fellow Gulf state Bahrain in September became the first Arab states in a quarter of a century to sign agreements to establish formal ties with Israel, forged largely through shared fears of Iran.

The so-called Abraham Accords are US-brokered agreements which have ushered in public rapprochements between Israel and several Arab states.

Friday's encounter on the east Mediterranean island was attended by Anwar Gargash, a former UAE foreign minister who worked on the historic normalisation of relations with Israel last year. He was there in his capacity as diplomatic advisor to UAE President Sheikh Khalifa bin Zayed.

"The Abrahamic accords were mainly driven by the necessity of an alternative strategic view of the region based on stability, prosperity and opportunity," Gargash said.

Discussions in Cyprus, he said, focussed on ways to enhance joint action in facing the fallout from the COVID-19 pandemic, medical research and the distribution of vaccines, as well as energy security in the region.

"This meeting is one of the results of the changes that have taken place in the Middle East over the past year, thanks to a brave and bold decision by leaders," said Israeli Foreign Minister Gabi Ashkenazi.

He said the accords had created a 'real opportunity' to change the face of the Middle East.

"And if you don't believe that, ask yourselves if you could have seen this picture only just a year ago," he said, standing at a podium next to Gargash, against the backdrop of the calm seas of the east Mediterranean.