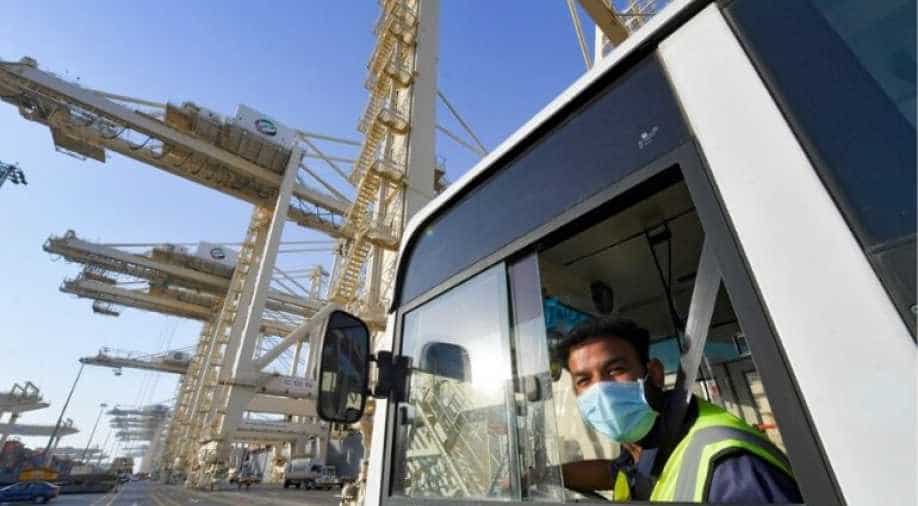 An employee wearing a face mask against the coronavirus, works at the port of Jebel Ali, operated by the Dubai-based giant ports operator DP World, in the southern outskirts of the Gulf emirate of Dubai, on June 18, 2020 Photograph:( AFP )

The virus has triggered a constant free-fall in oil prices, with a lot of highly-skilled expats leaving the countries

While the coronavirus pandemic has hit almost every country in the world, the Gulf economies have been worst affected.

The virus has triggered a constant free-fall in oil prices, with a lot of highly-skilled expats leaving the countries. Additionally, the debt continues to mount.

The IMF expects these economies to shrink by 7.6 per cent this year, across both oil and non-oil sectors.

However, the biggest impact will be felt in oil revenues. The drop in prices this year has caused a loss of over 10 billion USD. By the end of 2020 - this could cross 20 billion USD.

Saudi Arabia is facing a 6.8 per cent decline in its GDP. The profits of state-run oil explorer Saudi AramCo fell by 25 per cent.

As the lockdown cut the demand, OPEC decided to cut oil output. AramCo followed suit, and over 500 people were fired, mostly expats.

This has become the new normal in Gulf countries, where foreign workers are being sent home. This is worrying because expats make up close to half the population in some Gulf countries. Mostly working as builders and labourers, they are responsible for building the sprawling skylines in Gulf cities.

Gulf countries are highly-reliant on the expatriate population. GCC could lose four million expats by the end of this pandemic - almost 10 per cent of its total population.

What are these countries doing to plug the gaps?

The countries have announced relief packages, amounting for two-three percent of their GDPs.

Six countries together have set aside over 50 billion USD.

However, most of these countries are already deep in debt which was to be paid with petro-Dollars. As of now, the debt has piled up over 300 billion USD, with the amount expected to increase.

Besides oil, tourism has also suffered a major hit, witnessing a decline of 7.4 per cent in 2020. All this while entertainment and media sector contracted by 5.6 per cent.