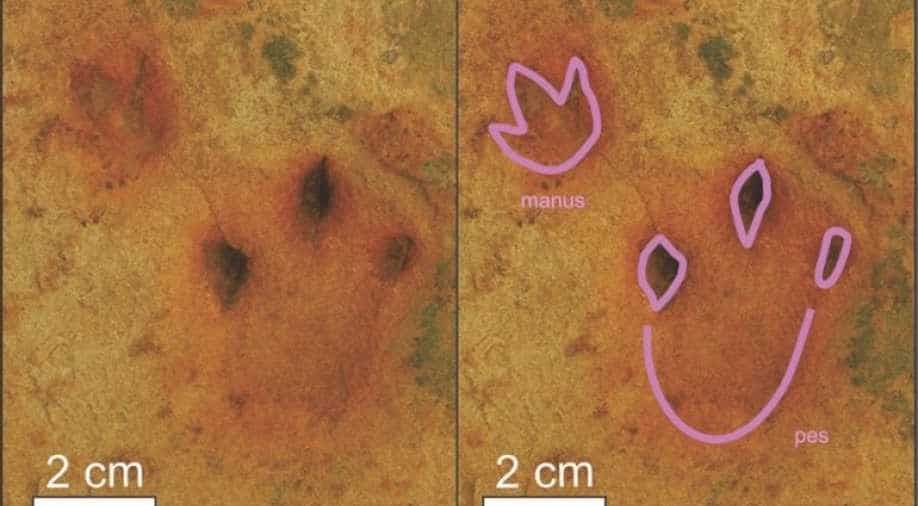 A set of hand-feet impressions of a dinosaur, are seen preserved in a sandstone layer in South Africa alongside an interpretive outline of the tracks. Photograph:( Reuters )

The environment of South Africa was transformed into a land of fire due to the huge massive amounts of lava flowed across the landscape approximately 183 million years ago during the early part of the Jurassic Period.

The research was published on Wednesday in the science and medicine journal called ''PLOS One''.

Scientists described fossil footprints which revealed that dauntless dinosaurs and other animals managed to inhabit the semiarid region of South Africa called Karoo during the time period between the volcanic eruptions.

They were termed as ''karoo firewalkers'' by Emese Bordy, a geologist from the University of Cape Town.

They were some of the last animals known to have lived in this inhospitable region before it ultimately was engulfed by molten rock.

The researchers found a sandstone layer on a farm in the centre of South Africa with five fossils trackways that were left by at least three different animals that walked across the moist sandy banks of a stream.

One was a relatively small two-legged meat-eating dinosaur, another was a similarly small four-legged apparently plant-eating dinosaur and the third may have been a primitive mammal.

"The evidence of dinosaurs grazing and hunting is attested by the vertebrate footprints of both meat and plant-eating dinosaurs, plant remains, sediment deposits of streams and lakes, to name just a few,'' lead researcher Bordy said.

"The properties of the sandstone allow us to tell that the tracks were deposited in seasonal streams that run during flash flood events," he added.

"This story helps us change the way we see life in stressful and hostile environments, and thus improves our understanding of the history of life on Earth," he reported.

During this time, there were major extinctions of species, especially in the oceans, caused mostly by gases emitted from immense lava flows that poured onto the land surface in South Africa. Even as it incinerated the landscape, the lava flows changed the chemistry of the atmosphere and seas.

Fossil footprints, in the absence of skeletal fossils, sometimes offer the only evidence that animals were present in an ancient environment. The sandstone containing the tracks was sandwiched in between layers of volcanic rock, revealing a picture of a functioning ecosystem that survived despite threats of devastation from further eruptions.