Lagos curfew eases after days of unrest in Nigeria 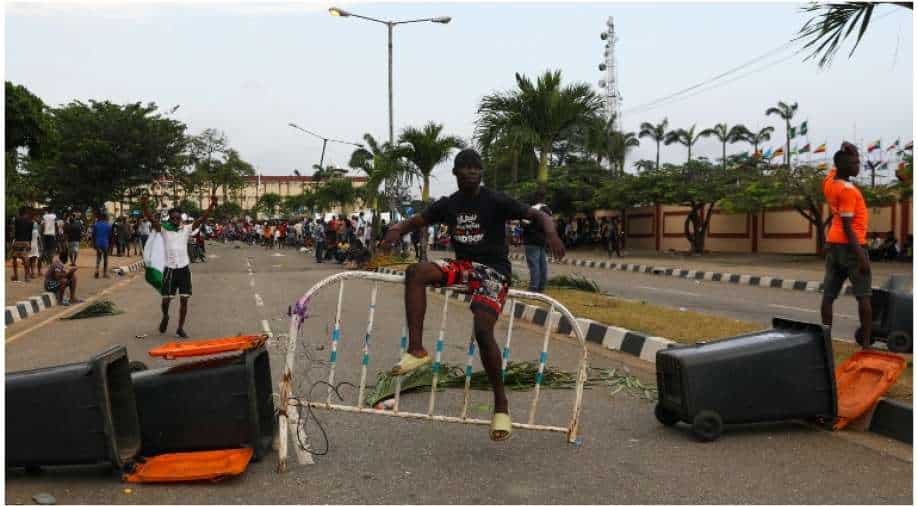 A demonstrator sits on a barricade blocking a road near the Lagos State House, despite a round-the-clock curfew imposed by the authorities on the Nigerian state of Lagos in response to protests against alleged police brutality, Nigeria October 20, 2020 Photograph:( Reuters )

Shops lifted their shutters and market traders set out their stalls Saturday, as Nigeria's biggest city Lagos cautiously reopened after a curfew was eased following days of unrest.

Streets in the centre of the economic hub were still largely deserted after the local governor said people would now be allowed out between 8am and 6pm.

Market vendors said they were waiting for deliveries and had few goods to sell, while the shops and restaurants that had reopened were mainly empty.

Lagos has been rocked by days of chaos since the shooting of peaceful protesters by security forces in the city on Tuesday.

Police stations were burnt, supermarkets looted and vehicles destroyed as violence flared across the economic hub of 20 million, with officials accusing "hoodlums" of taking advantage of the mayhem.

"Our beautiful city has seen a level of destruction almost akin to a war zone," governor Babijide Sanwo-Olu wrote on Twitter.

"Enough is enough. We want peace and we will get peace."

Lagos belongs to us all. No other state has this unique combination of people living in peace, harmony and progress so it saddened me when I went round for an on-the-spot assessment to ascertain the level of destruction to public assets and private properties.

Peaceful demonstrations against police brutality erupted in Nigeria on October 8 and quickly spiralled into one of the biggest challenges to the ruling elite in decades.

Amnesty International has said at least 12 protesters were gunned down by the army and police in Lagos on Tuesday, and a total of 56 people have died since the demonstrations began.

Sanwo-Olu said a judicial panel that would probe the shooting of demonstrators in downtown Lagos would start work on Monday.

Lagos has been under a round-the-clock lockdown since Tuesday, with the military sent out onto the streets to help quell the unrest.

An AFP journalist reported a far lighter police presence on streets in the centre of the city on Saturday.

Nigeria's President Muhammadu Buhari has called for an end to the protests and warned demonstrators not to "undermine national security".

He has not directly addressed the shooting of protesters in Lagos and sought to shrug off international outrage over the use of excessive force by his security agencies.