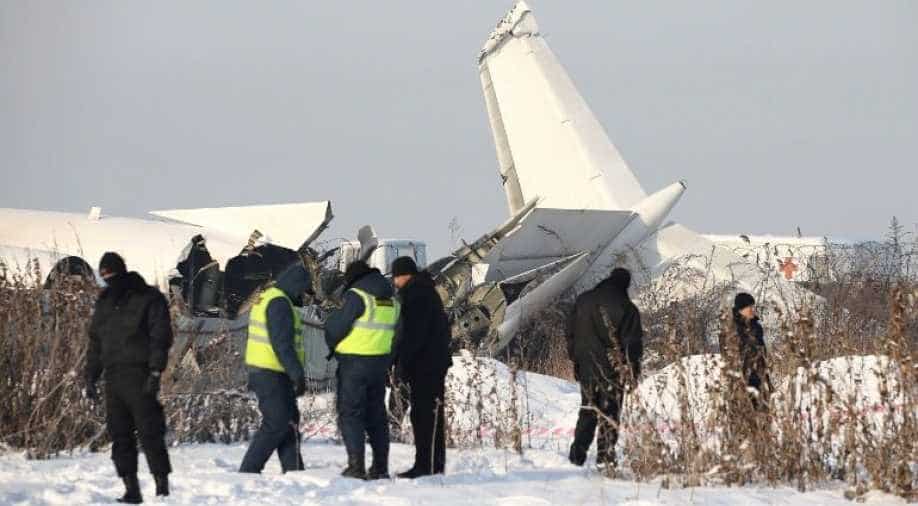 Emergency and security personnel are seen at the site of a plane crash near Almaty, Kazakhstan. Photograph:( Reuters )

The jet carrying nearly 100 passengers operated by budget carrier Bek Air was torn apart and its nose crushed on impact with a building in the country's biggest city Almaty.

Kazakhstan observed a national day of mourning on Saturday a day after 12 people died when an airliner crashed shortly after takeoff and slammed into a house.

The jet carrying nearly 100 passengers operated by budget carrier Bek Air was torn apart and its nose crushed on impact with a building in the country's biggest city Almaty, but many on board managed to walk away without serious injury.

In the capital Nur-Sultan, Kazakhstan's largest flag was at half-mast while officials made urgent appeals for blood donations to help injured survivors.

Neighbouring Russia and China were among the countries to join the Vatican and the European Union in expressing condolences to the former Soviet Central Asian republic.

Officials say the Fokker 100 plane's tail hit the tarmac twice on Friday during take-off before it came down and crashed into the concrete building, splitting into two.

According to Kazakh emergency authorities, the 12 dead included the pilot. Another 47 passengers out of the 98 people on board were still in hospital on Saturday. Nine of them were children, officials said.

An investigation has been opened into "violation of security regulations and air transport operating rules". But the interior ministry is still examining possible causes for the accident.

According to the authorities, an inquiry should announce its first conclusions next month. But a dozen other Bek Air aircraft will be grounded in the meantime.

According to the industry ministry, the low-cost airline operates nine Fokker-100 type aircraft, a medium-haul model built by the Dutch aircraft manufacturer Fokker.

In March 2016, a Bek Air Fokker 100 with 116 passengers on board had to make an emergency landing at Nur-Sultan International Airport due to a landing gear problem, without causing injuries.