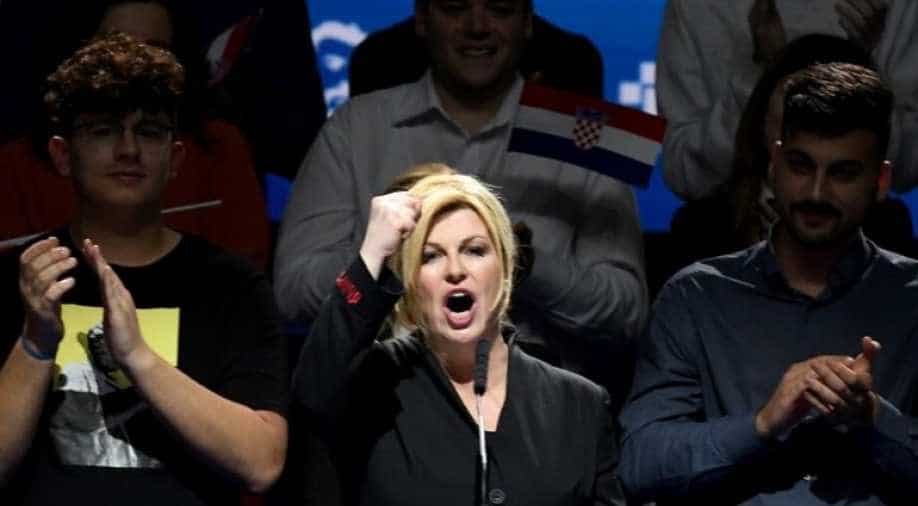 The pre-Christmas poll, likely to be decided in a January 5 run-off, has evolved into a tight race between conservative incumbent Kolinda Grabar-Kitarovic and front-running rivals on the right and the left

Croatians cast ballots in a presidential vote on Sunday that could weaken the ruling conservatives just as the country takes the helm of the European Union's rotating presidency.

The pre-Christmas poll, likely to be decided in a January 5 run-off, has evolved into a tight race between conservative incumbent Kolinda Grabar-Kitarovic and front-running rivals on the right and the left.

Grabar-Kitarovic has been president since 2015 with backing from HDZ, the centre-right party that has led Croatia for most of its independence since 1991.

During her term, the 51-year-old has wavered between representing the party's moderates and pandering to its nationalist faction.

In her re-election bid, she is struggling to hold on to hardliners shifting to a right-wing folk singer turned politician, Miroslav Skoro.

Playing on an emotive symbol of the 1990s independence war, Grabar-Kitarovic held her final campaign rally on Friday in eastern Vukovar, the town whose bloody siege by Serb forces became a byword for Croatian suffering during the conflict.

She told the crowd she believed those who fought and died in the war "don't regret being killed since Croatia is (now) here".

The comments were seen as part of her battle to keep far-right voters from turning to Skoro, who has been wooing nationalists with promises to deploy troops to halt migrants at the borders and pardon a convicted war criminal.

Running as an independent, the 57-year-old singer was polling in third place in the run-up to election day.

Meanwhile, the split on the right has carved out a space for leftist former premier Zoran Milanovic, 53, to gain traction. He was running neck-and-neck with Grabar-Kitarovic in the latest opinion polls.

Prime minister from 2011 to 2016, Milanovic was previously derided for his arrogance but is trying to make a comeback with the promise to make Croatia a "normal" country with an independent judiciary and respect for minorities.

Analysts say a loss for Grabar-Kitarovic would deliver a blow to HDZ Prime Minister Andrej Plenkovic, a moderate in the party, ahead of parliamentary elections next year.

Starting on January 1, his government will be tasked with hosting the EU's rotating presidency for a six-month term, with thorny issues like Brexit the Western Balkans' membership bids on the agenda.

Critics of the government have speculated that the pre-Christmas poll in an overwhelmingly Catholic country was purposefully scheduled to take advantage of the diaspora who are home for the holidays, and typically vote HDZ.

Of the 3.8 million people eligible to vote, some 170,000 are living abroad, mainly in neighbouring Bosnia.

The emigration exodus, a trend that accelerated after Croatia joined the EU in 2013, is one of the most pressing problems on the country's horizon.

The government has struggled to halt young people from packing their bags for better pay and professional opportunities in wealthier member states.

Many who leave also cite a culture of nepotism and corruption at home, plus poor public services, as key motivations.

The presidential campaign has however been light on policy ideas with many candidates instead attacking each other with war-era grievances.