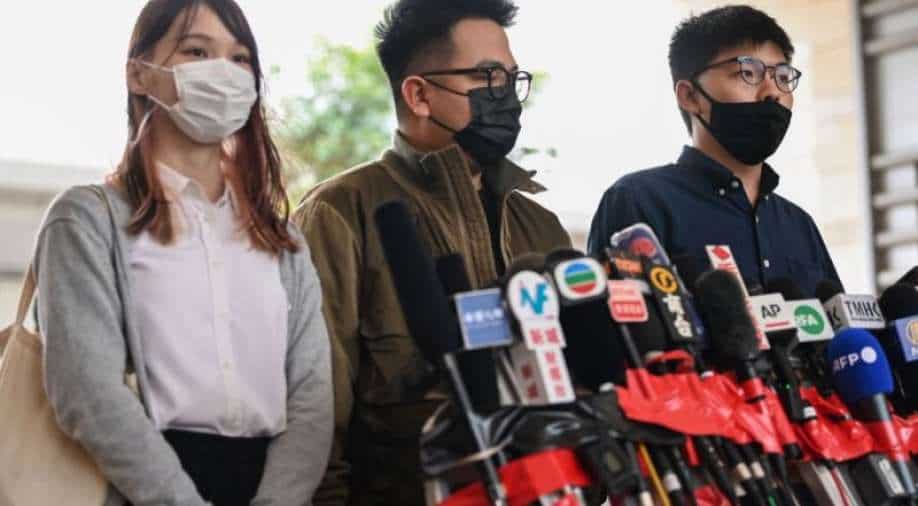 Beijing has refused demands for universal suffrage and authorities have pursued democracy supporters with criminal cases and a tough new security law.

Leading dissident Joshua Wong is among three Hong Kong activists who will be sentenced on Wednesday for taking part in last year's democracy protests as a crackdown on Beijing's critics gathers pace.

Hong Kong was convulsed by seven months of huge and often violent rallies in which millions took to the streets.

Wong was prosecuted alongside fellow activists Ivan Lam and Agnes Chow over a protest which took place last summer outside the police headquarters. The three pleaded guilty to various charges including inciting an unlawful assembly and were remanded into custody pending Wednesday's sentencing.

They face up to three years in jail.

Beijing has refused demands for universal suffrage and authorities have pursued democracy supporters with criminal cases and a tough new security law.

The tactics have stifled the movement and restored a semblance of calm. But the finance hub remains deeply polarised with many still seething against Beijing's growing hold on the semi-autonomous city.

Wong, Chow and Lam, 26, joined Hong Kong's pro-democracy movement when they were in their teens.

Earlier this summer, Beijing imposed a broad security law which ramps up its direct control over the city and outlaws certain political views.

More than 10,000 people have been arrested over the last 18 months and most of Hong Kong's leading activists and opposition figures face prosecution.

Chow is being investigated under the security law for allegedly "conspiring with foreign forces" by pushing for sanctions.

Wong is among another group of activists being prosecuted for a vigil marking the anniversary of Beijing's 1989 Tiananmen crackdown earlier this year.