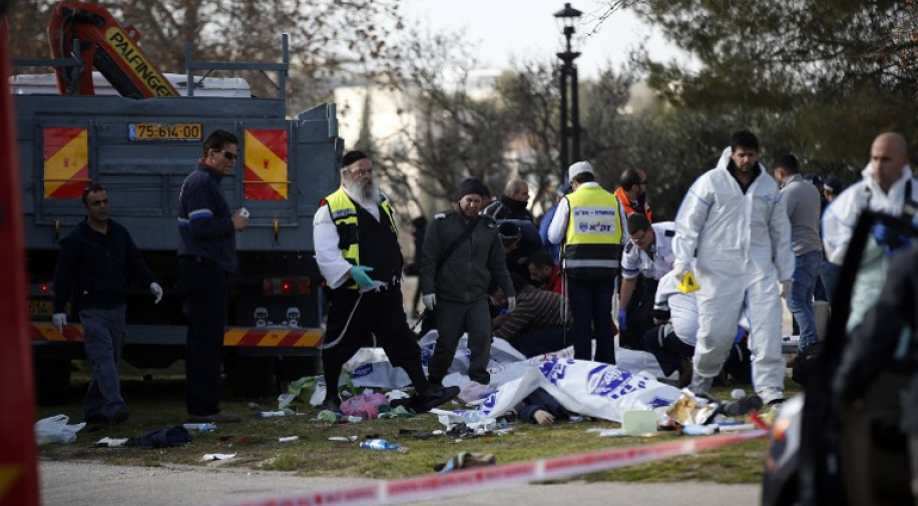 Authorities did not immediately give the identity of the driver. Photograph:( AFP )

Four people were killed after a Palestinian rammed his truck into a group of Israeli soldiers on a popular tourist promenade in Jerusalem on Sunday.

The Palestinian driver was shot dead at the location, police said.

According to Reuters, police said that the dead included three women and one man. They did not identify the victims further. A medic at the scene, however, said that they were soldiers. Soldiers' deaths are announced in Israel only after families are notified, Reuters said.

The soldiers were attacked when they were disembarking off a bus.

"A lone terrorist drove his truck into a group of soldiers standing on the side of the road," police spokesman Micky Rosenfeld told reporters at the scene, reported AFP.

"They got off the bus, and as they were getting off the bus and getting organised, he took advantage."

"It is a terrorist attack, a ramming attack," a police spokeswoman said.

Roni Alsheich, the national police chief, told reporters that the attack could have been inspired by the truck attack at a Christmas market in Berlin that killed 12 people last month.

"It is certainly possible to be influenced by watching TV but it is difficult to get into the head of every individual to determine what prompted him, but there is no doubt that these things do have an effect," Alsheich told reporters.

Video footage showed the truck driving through the soldiers. The driver then reversed back and ran over them again before the trcu eventually came to a stop.

"In a split second I looked to my left and saw what I can only describe as a speeding truck which sent me flying," a security guard, who was identified only as "A" told Channel 10.

"It was a miracle that my pistol stayed on me. I shot at a tyre but realised there was no point as he has many wheels, so I ran in front of the cabin and at an angle I shot at him and emptied my magazine. When I finished shooting, some of the officer cadets also took aim and also started firing."

"I heard my soldiers screaming and shouting," said one of the tour guides, Lea Schreiber.

"I saw a truck that went on the side of the road. Soldiers starting shooting... There were orders and screaming everywhere. They told them to hide behind the wall because there was fear of another attack."

At least 37 Israeli's and two visiting Americans have been killed over the past 15 months in Palestinian street assaults.

Since October 2015, 247 Palestinians, 40 Israelis, two Americans, a Jordanian, an Eritrean and a Sudanese have been killed in a wave of violence, according to an AFP count.

Many analysts say Palestinian frustration with the Israeli occupation and settlement-building in the West Bank, comatose peace efforts and their own fractured leadership have helped feed the unrest.

Israel says incitement by Palestinian leaders and media is a leading cause.