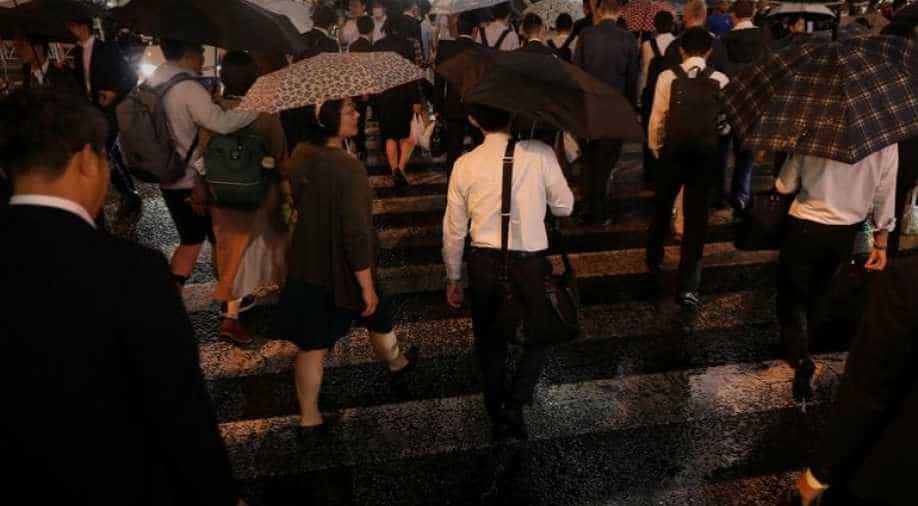 Commuters at rush hour during a rain storm near Shinagawa Station in Tokyo. Photograph:( Reuters )

The storm could be the strongest to hit Tokyo since 1958 and people should also prepare for high waves and storm surges, the Japan Meteorological Agency said.

A powerful typhoon approached Japan on Friday, threatening to batter its capital with the heaviest rain and winds in 60 years, shutting down stores, factories and subway systems and disrupting a Formula One Grand Prix and rugby's World Cup.

Typhoon Hagibis, which means "speed" in the Philippine language Tagalog, is due to make landfall on the main island of Honshu on Saturday, a month after one of the strongest typhoons to hit Japan in recent years destroyed or damaged 30,000 houses and caused extensive power outages.

The storm could be the strongest to hit Tokyo since 1958 and people should also prepare for high waves and storm surges, the Japan Meteorological Agency said.

"The typhoon could bring record-level rainfall and winds," an official at the agency told a news conference.

Prime Minister Shinzo Abe ordered his cabinet ministers to do their utmost to secure people's safety.

Officials in the Chiba prefecture east of Tokyo, which was hit hard by typhoon Faxai a month ago, have told people to prepare supplies of food and water for up to three days.

Some supermarkets ran out of bottled water and batteries. Twitter users posted photographs of bare shelves and traded tips on how to prepare for disruptions to water and power cuts.

Many of more than 30,000 houses Typhoon Faxai destroyed or damaged in Chiba last month have yet to be repaired.

Japanese Formula One Grand Prix organisers cancelled all practice and qualifying sessions scheduled for Saturday, adding that the qualifying round would be held on Sunday, before the final race takes place as planned.

The approaching super typhoon has already forced the cancellation of two matches of the Rugby World Cup on Saturday, while a Sunday match between host Japan and Scotland is in doubt.

It and rival Japan Airlines Co cancelled some flights to and from airports servicing the major cities of Osaka and Nagoya.

Most flights operating to and from those airports would be cancelled on Saturday, both airlines said on their websites.

Train operators said they would suspend bullet trains between Tokyo and Nagoya in central Japan and most operations between Nagoya and Osaka, in western Japan, from Saturday morning.

Most train and subway lines in Tokyo are also due to be shut down.

Tokyo Disneyland said it would close its theme park on Saturday, its first weather-related closure since a snowstorm in 1984. Retail giant Seven & I Holdings said it would shut its supermarkets and department stores in metropolitan Tokyo.

Storm surges are likely along the Pacific coast of Honshu on Saturday and Sunday, as is torrential rain, raising the risk of floods and landslides, public broadcaster NHK said.