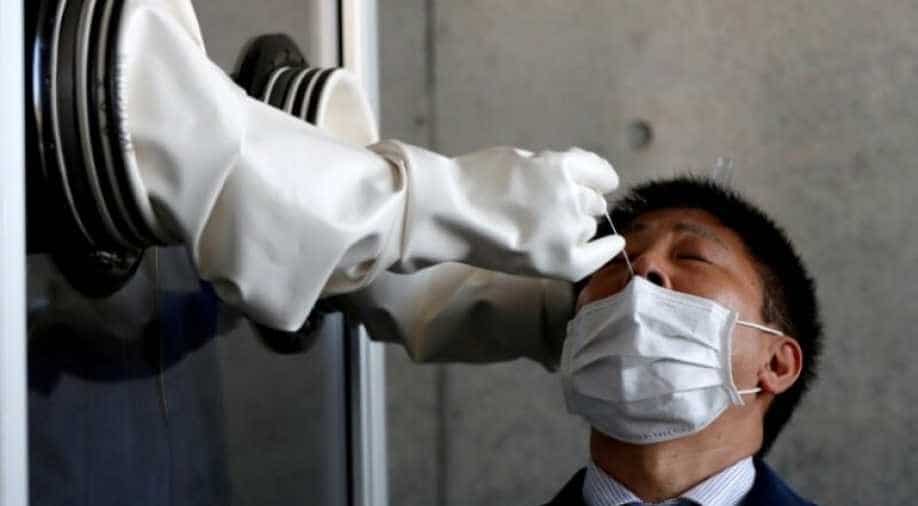 The new testing method targets those within nine days of displaying symptoms and is covered by public health insurance. It is expected to pose less of an infection risk to medical staff, as examinees only provide their saliva in a container at medical facilities.

Japan's government on approved Tuesday a PCR coronavirus test using saliva, which is much safer and easier compared with the currently dominant method, which collects mucus from back part of the nose.

The new testing method targets those within nine days of displaying symptoms and is covered by public health insurance. It is expected to pose less of an infection risk to medical staff, as examinees only provide their saliva in a container at medical facilities.

The existing method uses a cotton swab to collect mucus from the nose, which has a high possibility of causing the patients to sneeze or cough in the process. As it leaves medical staff collecting the sample prone to potential infection, they need to wear goggles and gown. This has become a sticking point in expanding the scale of PCR testing.

The saliva-based tests are able to be given to those who have had symptoms for up to nine days, Japan's health ministry said. It wasn't immediately clear how much the change would boost overall testing capacity.

"This will vastly reduce burdens on patients as well as burdens that come with infection-prevention steps on the part of sample-collecting institutions," Health Minister Katsunobu Kato told reporters, outlining the change.

Japan falls well behind other industrialised nations in terms of its number of coronavirus tests. Critics say the low rate of testing has made it difficult to trace the virus, which has led to a series of in-hospital infection clusters.

Japan, which lifted its state of emergency last week, has escaped an explosive outbreak, with nearly 17,000 infections and 898 deaths so far, according to NHK public broadcaster. But the epidemic has tipped the world's third-biggest economy into recession and sent Prime Minister Shinzo Abe's popularity to multi-year lows.

The health ministry said about two dozen different test kits, including one from Takara Bio Inc, have been approved for saliva-based PCR tests. Shares in Takara Bio jumped 4% on Tuesday, outperforming a 1.19 per cent rise in the Nikkei average.

More than 30 new coronavirus infections were reported in Tokyo on Tuesday, NHK said, marking the first time the number of daily cases has topped 30 in 19 days.

Musashino Central Hospital in western Tokyo said 12 patients and three hospital workers had been confirmed with the virus, taking the total number of cases at the hospital to 31, forming the latest infection cluster.