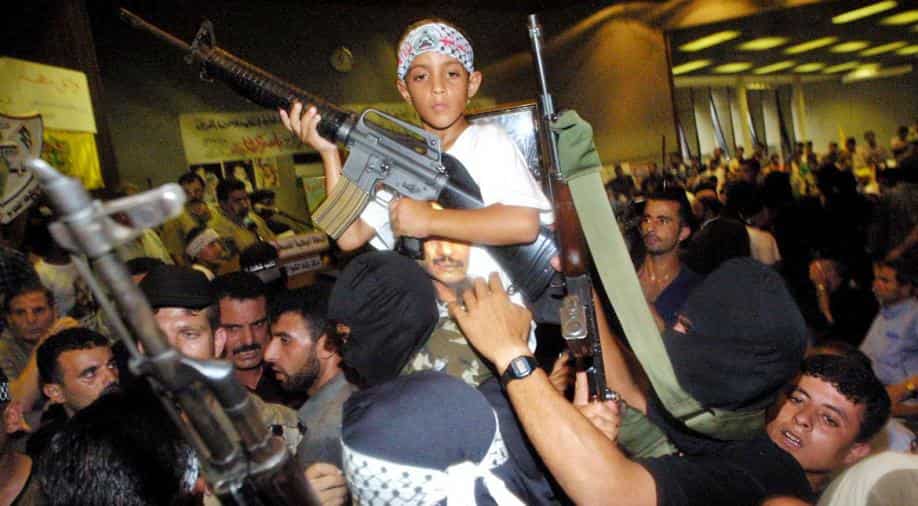 Ramzi Al-Amaren is held aloft at an anti-Israel rally in Gaza City. Ramzi is the son of Jihad Al-Amaren, slain Palestinian leader of the al-Aqsa Martyrs' Brigades. Photograph:(Getty)
Follow Us
Heavy fighting between the Islamic State group and rebels gripped a town in northeastern Syria Saturday, a monitor and an activist said, after a lightning assault by the jihadists cut a main supply route.
"Heavy clashes took place overnight between IS fighters and rebels inside the walls of Marea town," the Syrian Observatory for Human Rights said.
IS swept through rebel-held territory early Friday in a shock offensive in Aleppo province, cutting off the main road between Marea and Azaz, 20 kilometres (12 miles) to the northeast near the Turkish border.
The surprise advance came as the jihadist group faced an offensive by a US-backed Kurdish-Arab alliance in its own heartland of Raqa province further east.
Maamoun Khateeb, a journalist and activist from Azaz, told AFP that IS attacked Marea early Saturday mainly from the east and north using tanks and two car bombs.
The advance has besieged around 15,000 residents remaining inside Marea, he said.
Human rights groups have warned that the IS advance in Aleppo has left tens of thousands of displaced Syrians trapped along the closed Turkish border.
To the east in Raqa province, warplanes from the US-led coalition conducted air strikes on IS positions north of Raqa city, Observatory chief Rami Abdel Rahman said.
But the Kurdish-Arab alliance fighting the jihadist group north of its de facto Syrian capital had made no strategic progress on the ground, he said.
Syria`s war has killed more than 280,000 people and displaced millions since it started with the brutal repression of anti-government protests in 2011.