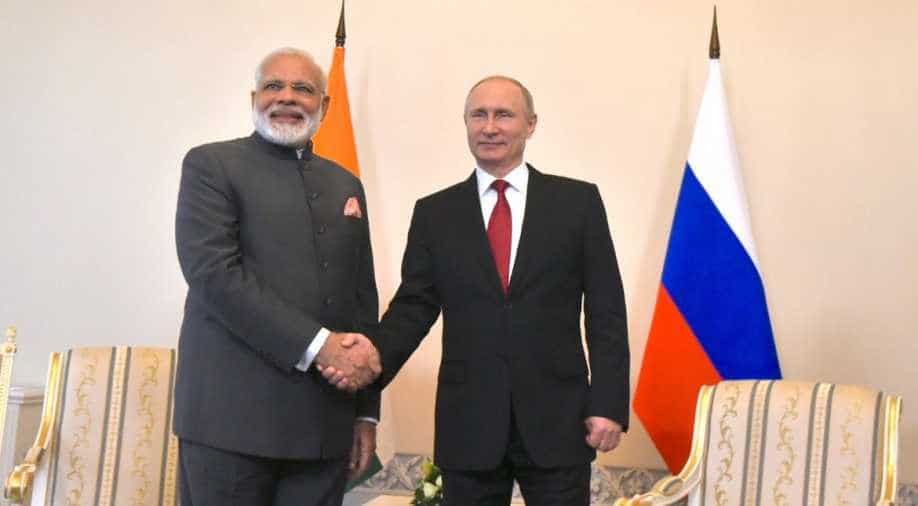 The SCO is a political, economic, and military bloc founded in 2001 in Shanghai by the leaders of China, Kazakhstan, Kyrgyzstan, Russia, Tajikistan, and Uzbekistan ||Indian PM Modi, who met Putin on the sidelines of a bilateral summit, thanked Putin for his active role in getting India SCO membership

Russian President Vladimir Putin said on Thursday (June 1) India was set to become a full-fledged member of the Shanghai Cooperation Organisation (SCO) in a week's time.

Putin was speaking at a meeting with Indian Prime Minister Narendra Modi who is visiting St Petersburg for an annual Russia-India.

"I am very glad to have this opportunity to meet you and to talk on a whole spectrum of bilateral relations as well as international issues. As for our international cooperation, I would like to note just one thing. In a week we secure India's full fledged entry into the Shanghai Cooperation Organization."

Modi praised relations between the two countries, saying they were "trust-based".

"India and Russia have a friendship that goes so far back, are so deep and trust-based that in all issues of the international agenda India and Russia have always stayed together. Soon we will become a full member of the SCO (Shanghai Cooperation Organisation) thanks to your proactive role. I want to thank you once again for the support that you provided India to become the SCO full member."

Putin and Modi are scheduled to take part in the St Petersburg International Economic Forum on Friday (June 2). It will be Modi's first time taking part in the event as a guest of honour.

The leaders will meet again at the SCO summit on June 8-9 in Kazakhstan's capital Astana.

Last October, India and Russia signed billions of dollars of defence and energy deals at a summit in Goa that sought to inject new life into a relationship which has been tested by shifting global alliances and conflict in the Middle East.

Modi's current foreign trip, which included visits to Germany and Spain, aims to boost India's economic and defence engagement as well as attract additional investment to the country from some of the biggest economies in Europe.

The SCO is a political, economic, and military bloc founded in 2001 in Shanghai by the leaders of China, Kazakhstan, Kyrgyzstan, Russia, Tajikistan, and Uzbekistan.