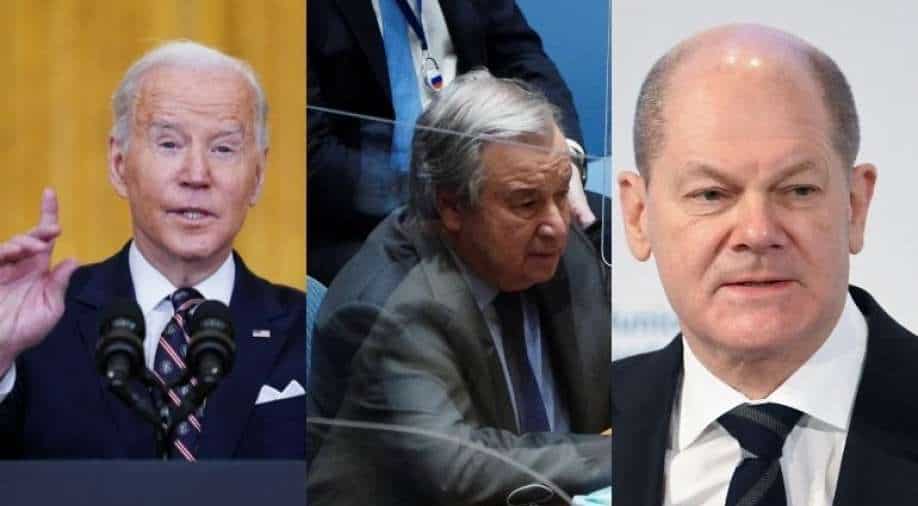 In a last-minute plea to Putin, UN Secretary-General Antonio Guterres appealed to stop the war 'in the name of humanity', after the Russian leader announced the military operation.

"The world will hold Russia accountable" for its attack against Ukraine, US President Joe Biden said on Wednesday. He warned the attack will cause "catastrophic loss of life."

Following the announcement of the start of military operations in Ukraine by Russian President Vladimir Putin, Biden said he would address the US public on Thursday to speak on the 'consequences' for Russia. He described the attack as "unprovoked and unjustified".

"Russia alone is responsible for the death and destruction this attack will bring, and the United States and its Allies and partners will respond in a united and decisive way. The world will hold Russia accountable," he said.

Biden said his prayers were with the people of Ukraine "as they suffer an unprovoked and unjustified attack by Russian military forces", adding that Putin had chosen a premeditated war that would bring a catastrophic loss of life and human suffering.

In a last-minute plea to Putin, UN Secretary-General Antonio Guterres appealed to stop the war "in the name of humanity", after the Russian leader announced the military operation.

"President Putin, in the name of humanity bring your troops back to Russia," he said after an emergency meeting of the UN Security Council over the crisis.

"In the name of humanity do not allow to start in Europe what could be the worst war since the beginning of the century," he said, adding the conflict "must stop now."

German Chancellor Olaf Scholz described the Russian military operation in Ukraine as "a glaring violation" of international law on a "dark day" for Europe.

"Germany condemns in the strongest possible terms this unscrupulous act by President Putin. Our solidarity goes out to Ukraine and its people," he added in a statement.

Scholz, whose country currently holds the presidency of the G7 forum, said it was "a terrible day for Ukraine".

He urged Moscow to stop its military operation "immediately".

"The UK and our allies will respond decisively," he tweeted, adding he had spoken to Ukraine's President Volodymyr Zelensky.

Even as world leaders condemn this alleged "attack," Russia's ambassador to the UN said in an emergency meeting of the Security Council late Wednesday that Moscow's military operation against Ukraine is only targeted at "the junta" in power in Kyiv.

"I wanted to say in conclusion that we aren't being aggressive against the Ukrainian people but against the junta that is in power in Kiyv," said Vassily Nebenzia.

"These are among the darkest hours of Europe since the Second World War, said European Commission foreign policy chief Josep Borrell

"The EU will respond in the strongest possible terms and agree on the harshest package of sanctions we have ever implemented," he added.

"We have a land war in Europe that we thought was only to find in history books. It is a flagrant breach of international law. For Russia, this attack will have severe political and economic consequences," said Germany's Economy Minister Robert Habeck.

China said it was closely monitoring the situation.

"China is closely monitoring the latest situation. We call on all sides to exercise restraint to prevent the situation from getting out of control," said Chinese Foreign Ministry Spokesperson Hua Chunying.