Air raid sirens rang out in downtown Kyiv on Thursday as cities across Ukraine were hit with what Ukrainian officials said were Russian missile strikes and artillery.

According to reports, citizens were headed for underground metro stations to take shelter, as authorities declared martial law in the face of what they fear is a full-scale invasion. 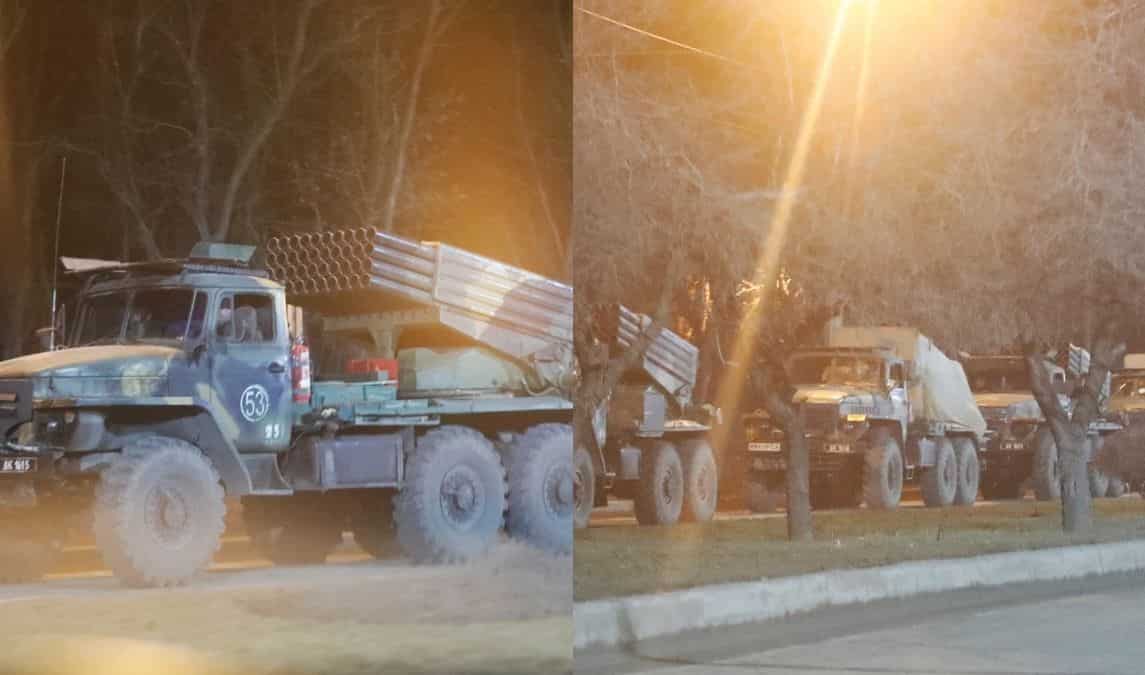 Military vehicles are seen on a street on the outskirts of the separatist-controlled city of Donetsk, Ukraine on February 23, 2022. 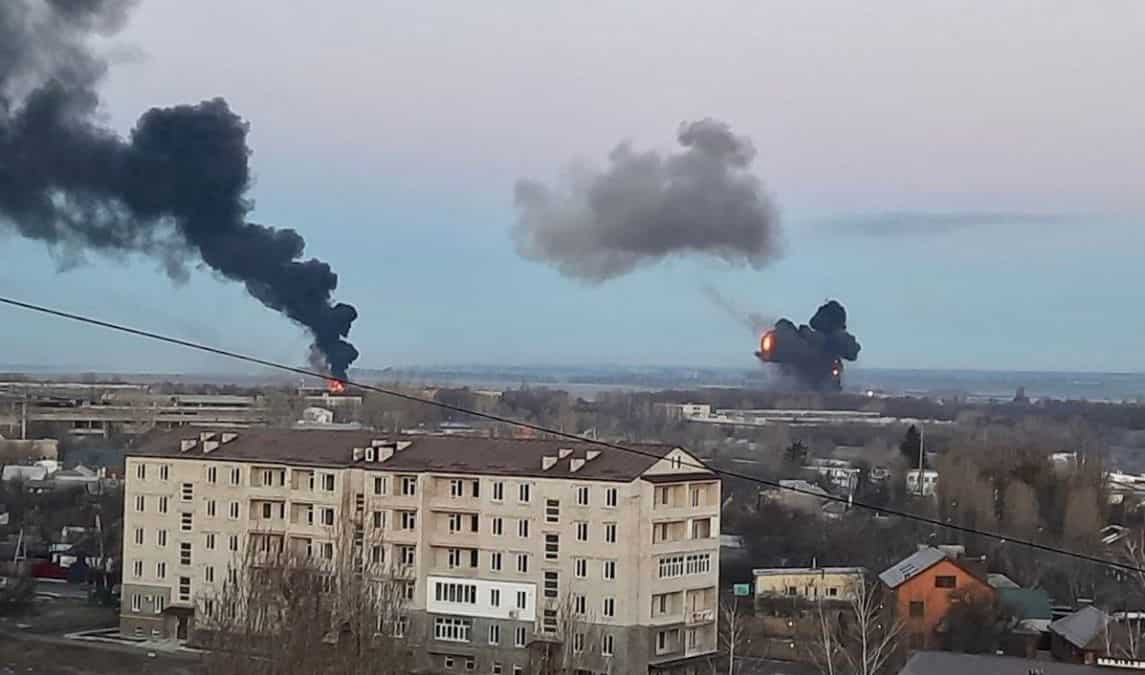 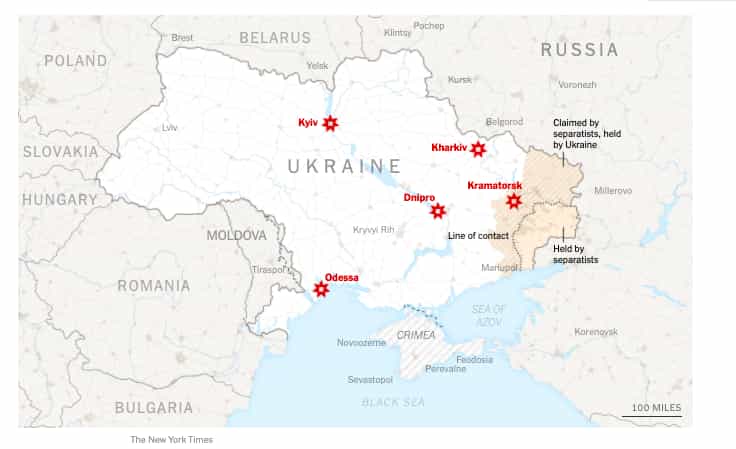 Russia launched cruise and ballistic missiles at airfields and military headquarters near Kyiv, the country’s capital city, according to Ukrainian officials.

Ukraine’s state emergency services said that attacks had been launched against 10 Ukrainian regions, primarily in the east and south of the country. Several planes were hit at airports, the statement said. 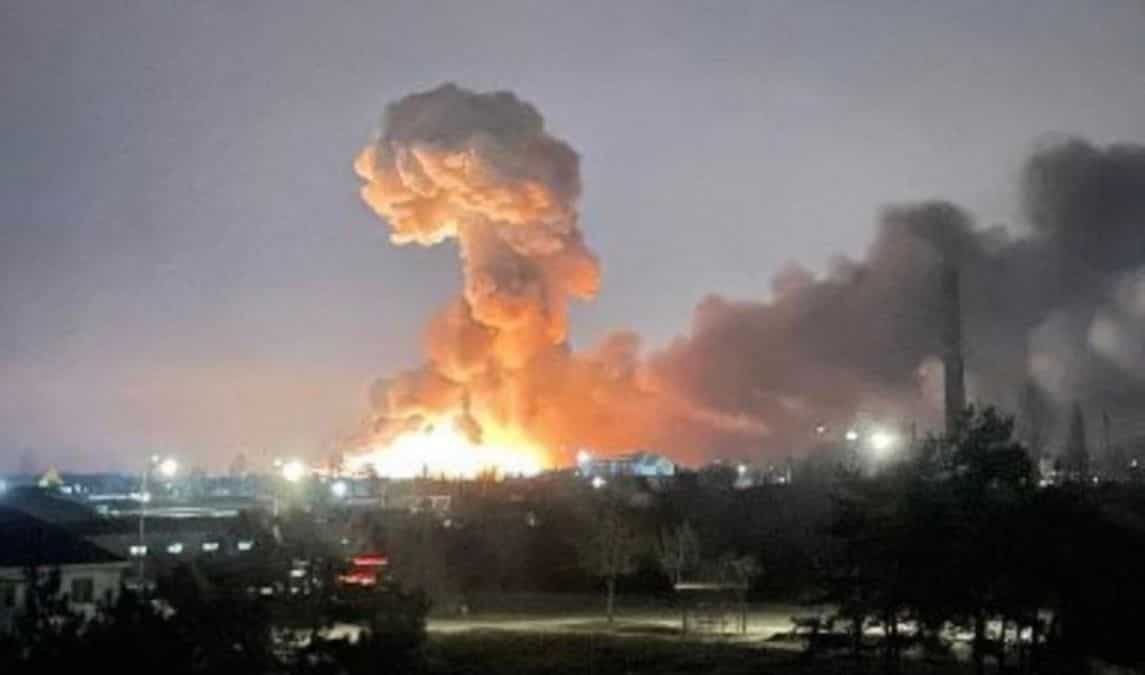 "This is a war of aggression. Ukraine will defend itself and will win. The world can and must stop Putin. The time to act is now." 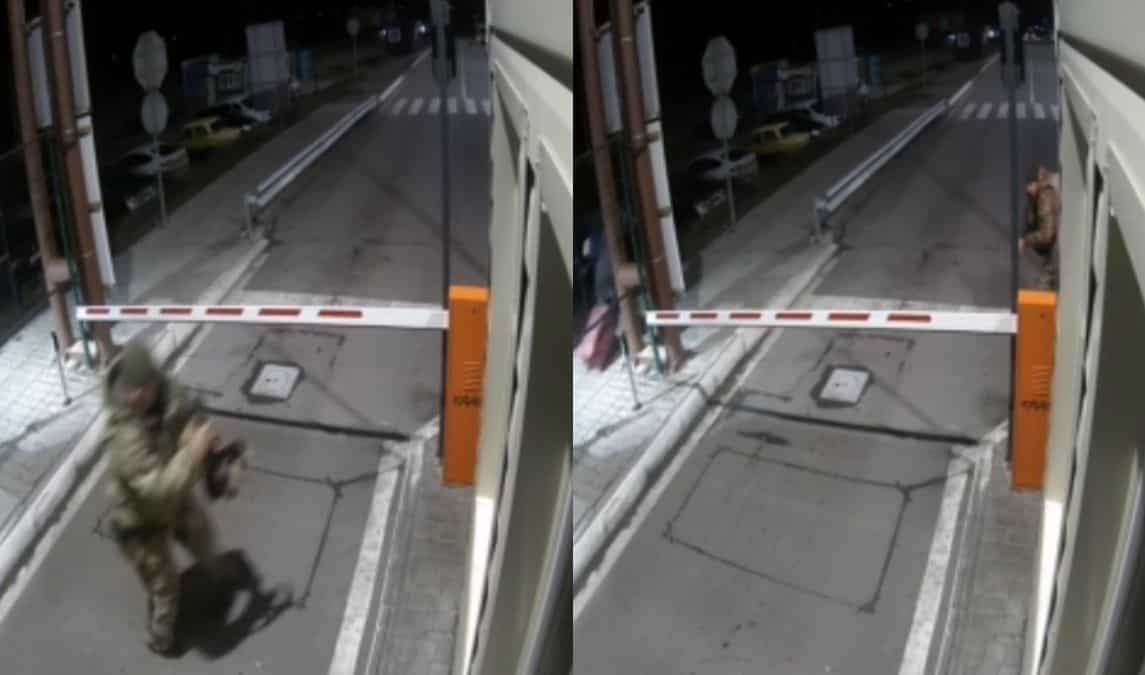 Vladimir Putin said he had authorised military action after Russia had been left with no choice but to defend itself against what he said were threats emanating from modern Ukraine, a democratic state of 44 million people. 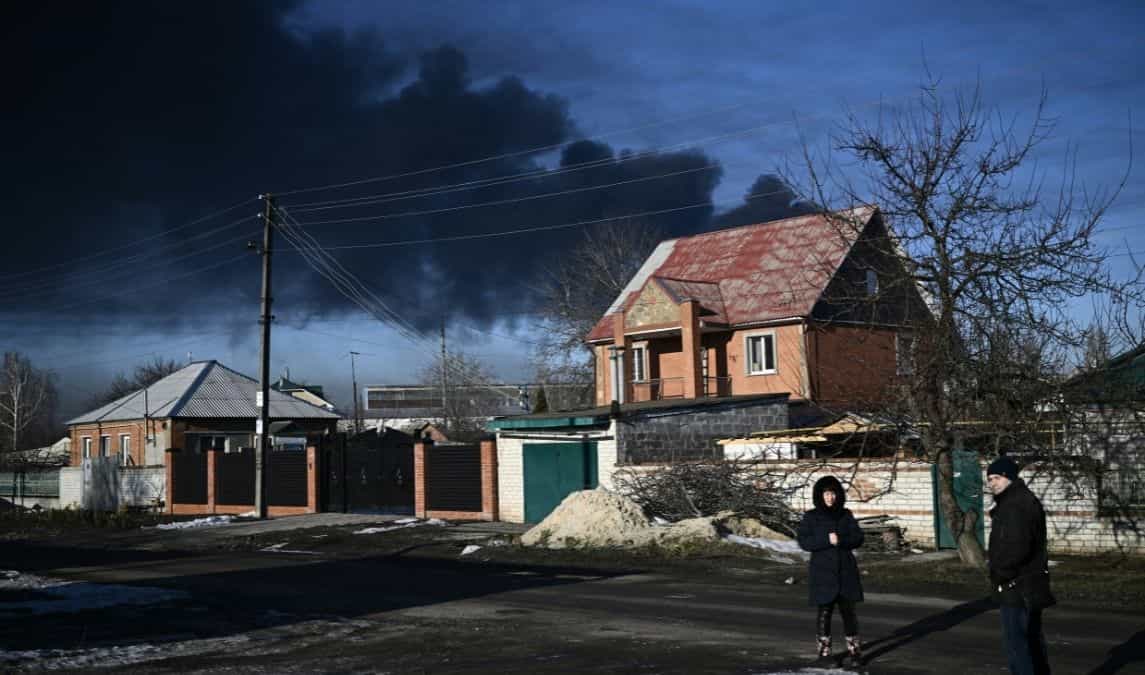 Black smoke rises from a military airport in Chuguyev near Kharkiv

"Russia cannot feel safe, develop, and exist with a constant threat emanating from the territory of modern Ukraine," Putin said. "All responsibility for bloodshed will be on the conscience of the ruling regime in Ukraine." 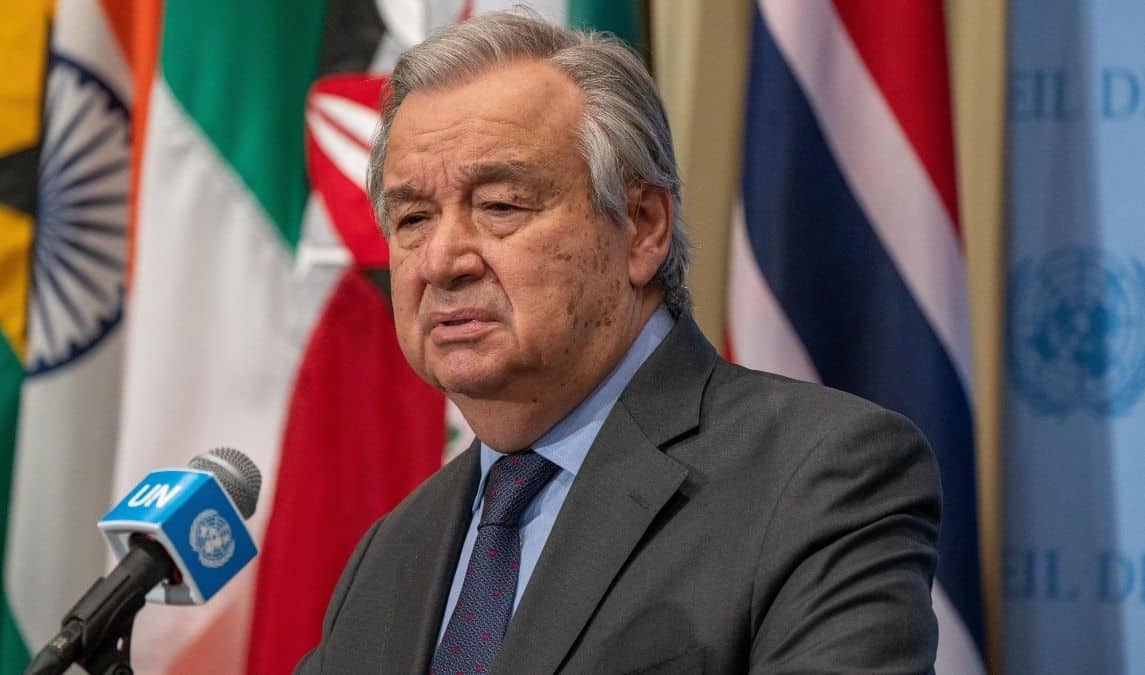 'In the name of humanity': Pleads UN chief

In a last-minute plea to Putin, UN Secretary-General Antonio Guterres appealed to stop the war "in the name of humanity", after the Russian leader announced the military operation.

"President Putin, in the name of humanity bring your troops back to Russia," he said after an emergency meeting of the UN Security Council over the crisis.

"In the name of humanity do not allow to start in Europe what could be the worst war since the beginning of the century," he said, adding the conflict "must stop now." 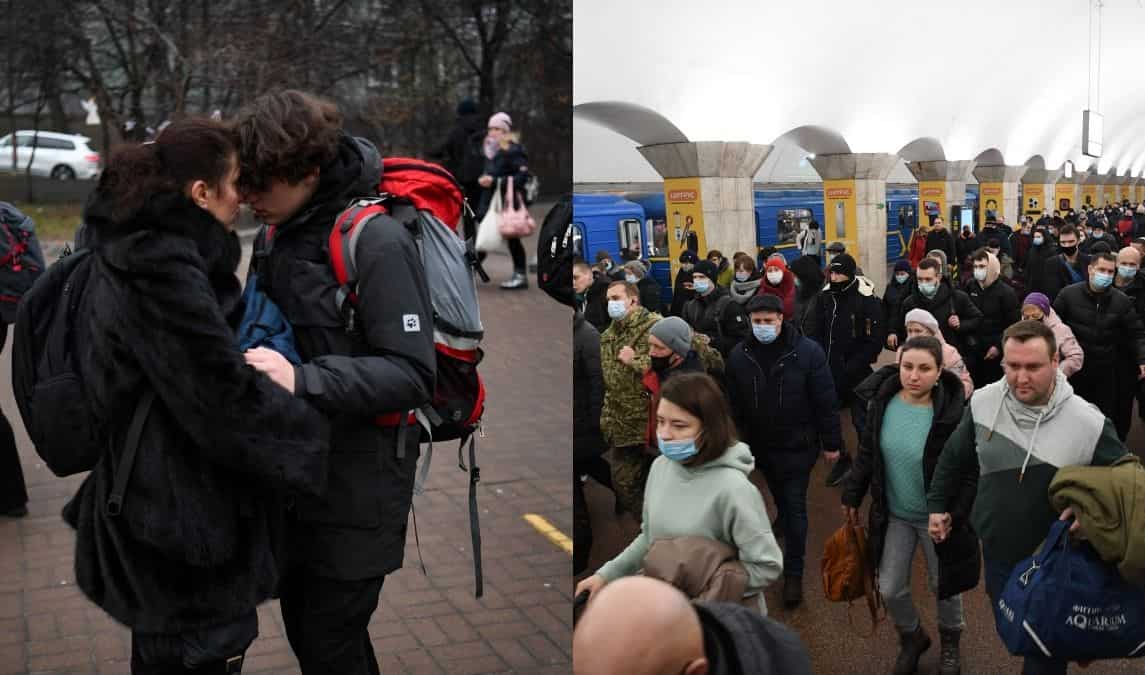 The United Nations reports that more than 14,000 people have died in the conflict since 2014. Among them are 3,300 civilians.

As a result of the fighting, an estimated 1.4 million people have fled their homes or relocated to escape danger along the front lines. The US has predicted a new invasion by Russia could be more devastating, causing up to 50,000 civilian deaths and displacing up to 5 million people from their homes in a matter of days. 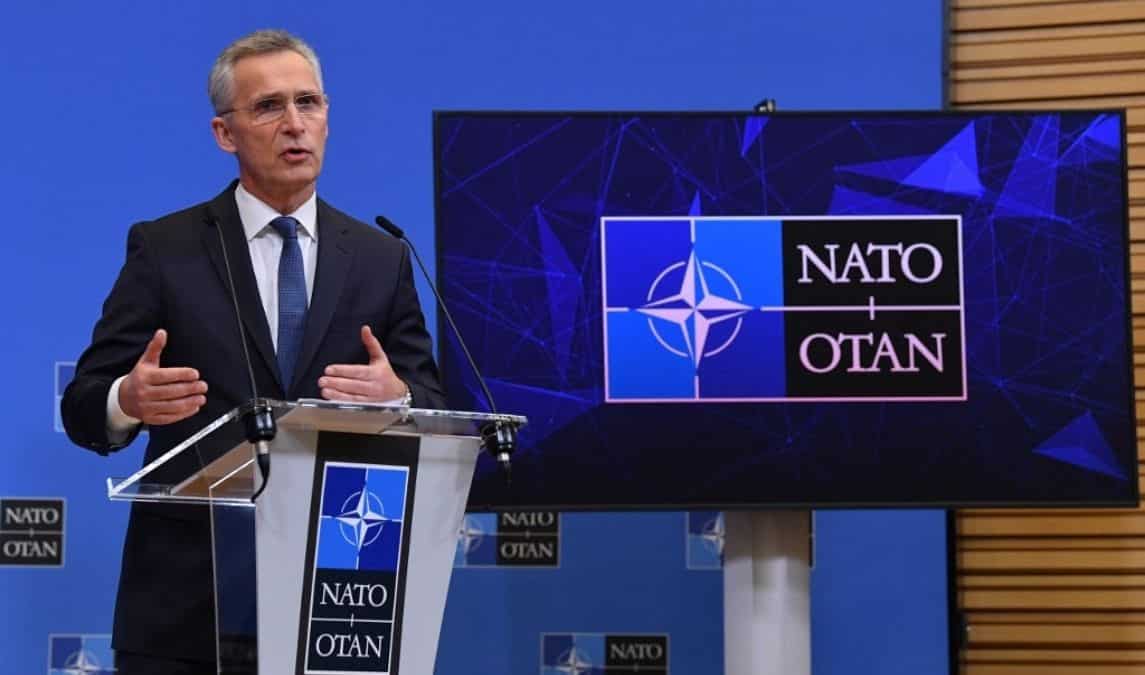 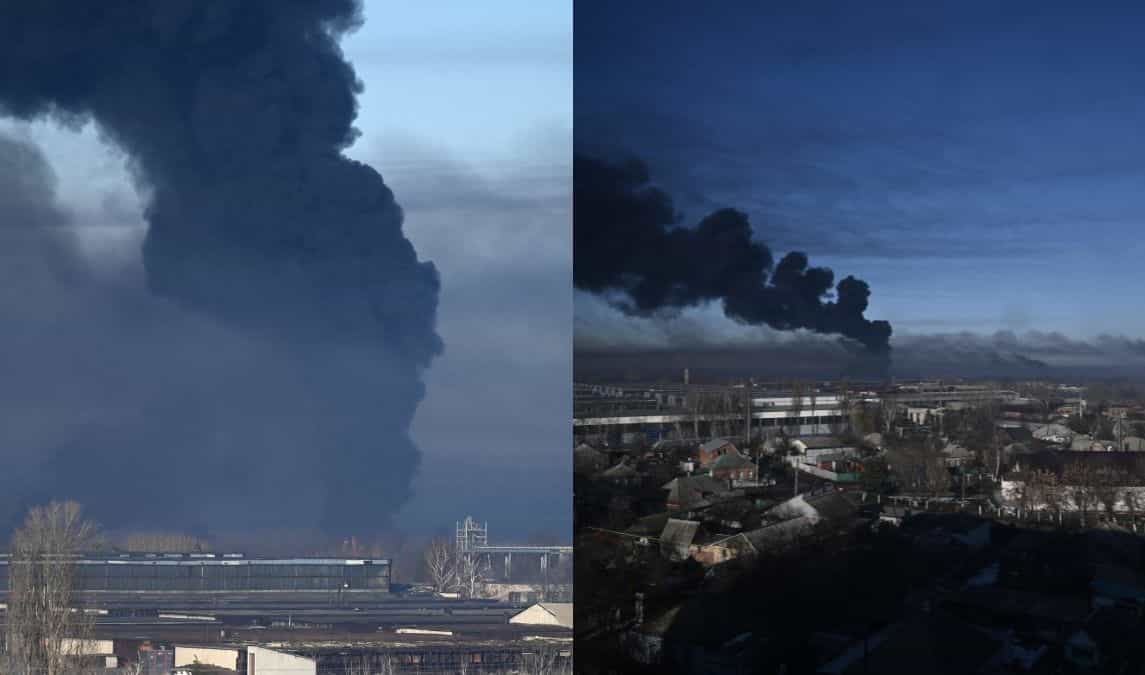 Black smoke rises from a military airport in Chuguyev near Kharkiv

Ukrainian President Volodymyr Zelenskiy said Russia had carried out missile strikes on Ukrainian infrastructure and border guards, and that explosions had been heard in many cities. An official also reported non-stop cyber attacks.

Zelenskiy said that martial law had been declared and he had appealed to world leaders to impose all possible sanctions on Russia, including on Putin, who he said wanted to destroy the Ukrainian state. 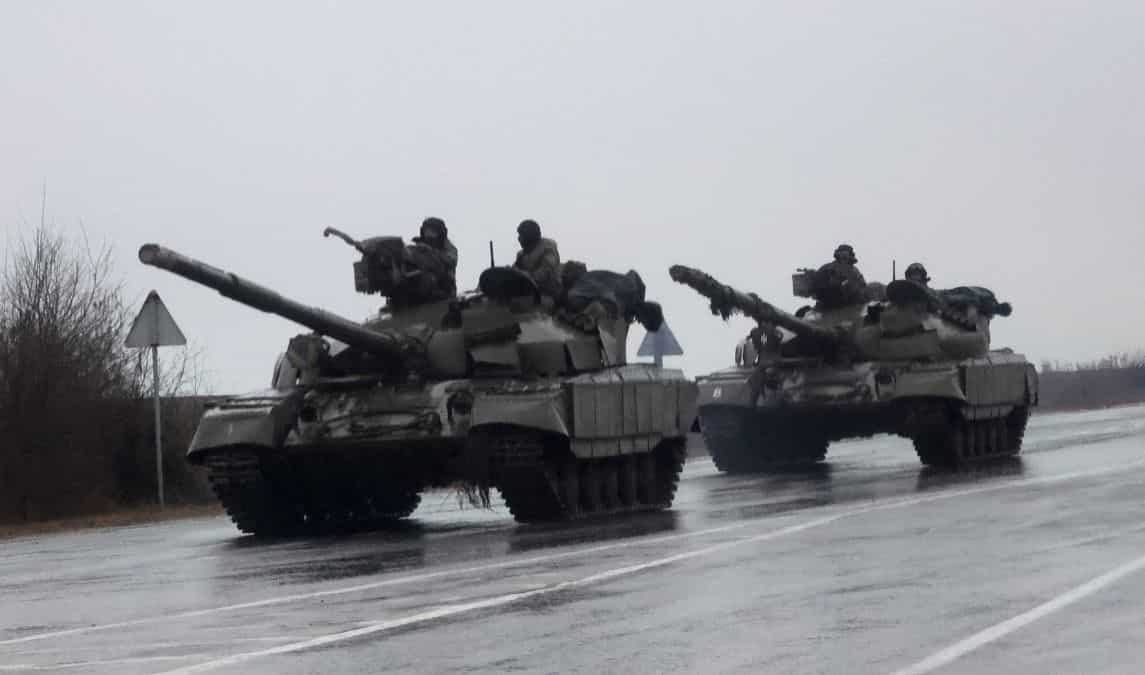 Russian tanks and other heavy equipment crossed the frontier in several northern regions, as well as from the Kremlin-annexed peninsula of Crimea in the south, the agency said.

It said one of its servicemen died in a shelling attack along the Crimean border, the first officially confirmed military death of the Russian invasion.

Ukraine has suffered heavy casualties in its eight-year conflict with Russian-backed rebels in the separatist east, but has reported no fatalities along its southern border with Crimea for some years. 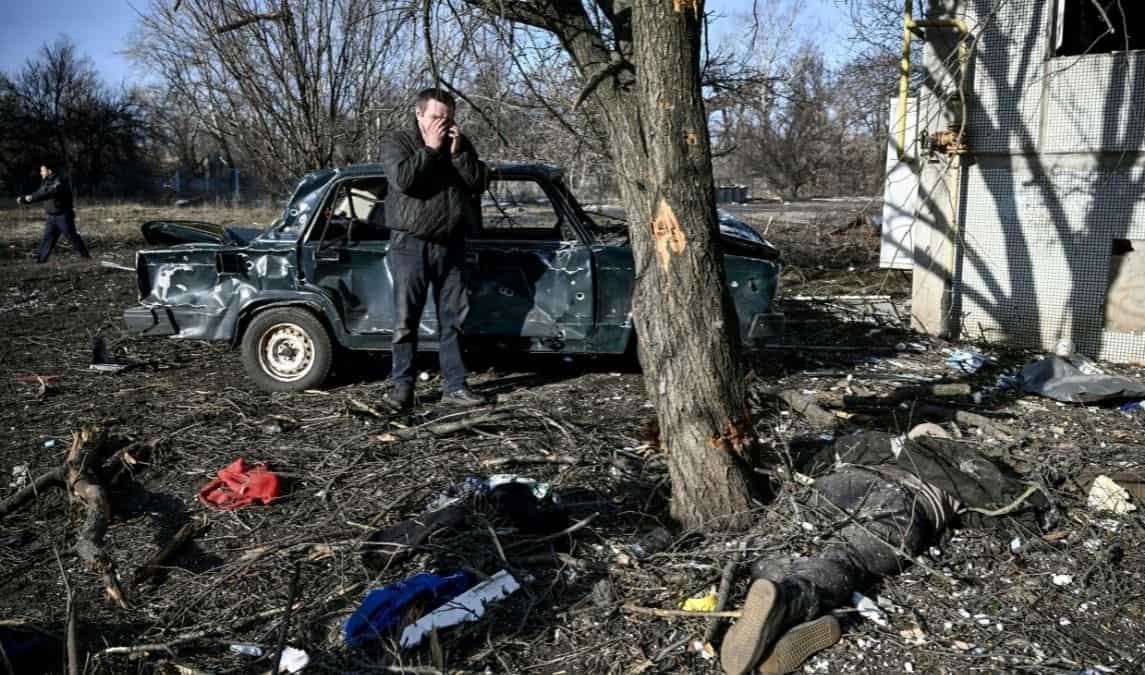 Across Ukraine's vulnerable eastern front civilians and soldiers scrambled to react as one of the world's most powerful militaries began what authorities warned was a "full-scale invasion".

"I told him to leave," the man in his 30s sobbed, next to the twisted ruins of a car. 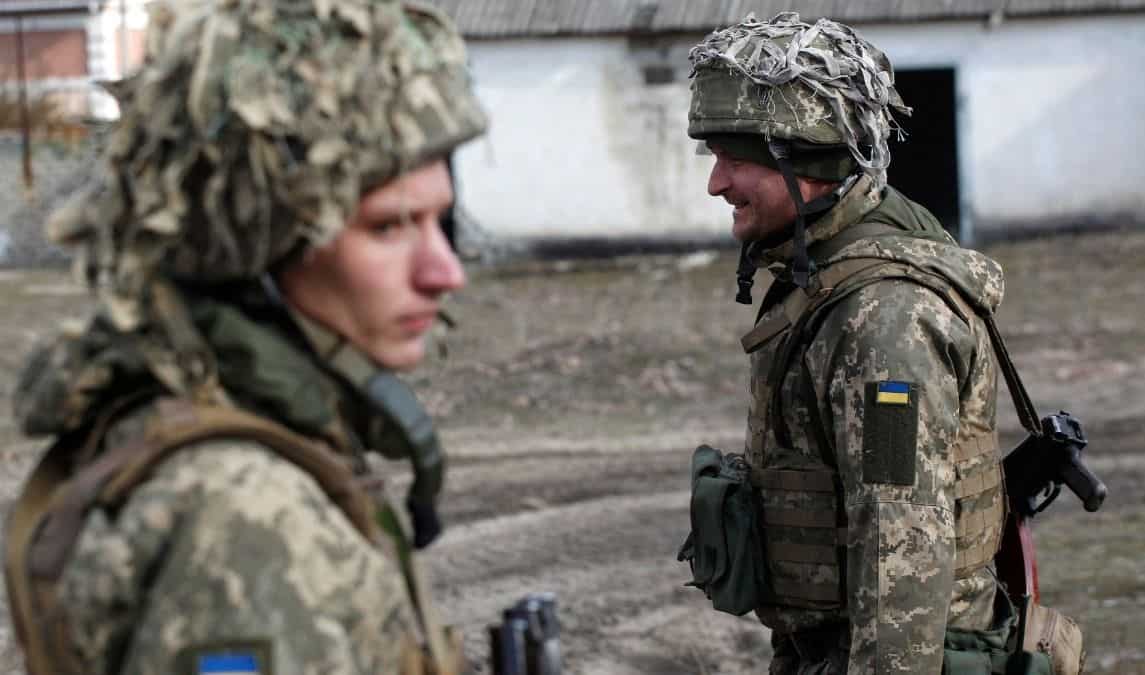 Some 300 kilometres to the south in key port city of Mariupol -- close to the frontline where Russia-backed separatists have been fighting Ukraine -- authorities were rushing to evacuate civilians as fighting raged.

Local official Alexiy Babchenko said they were starting to move people out of two areas to the nearest railway station -- but the violence was too heavy to begin in another location.

"It is under heavy artillery". 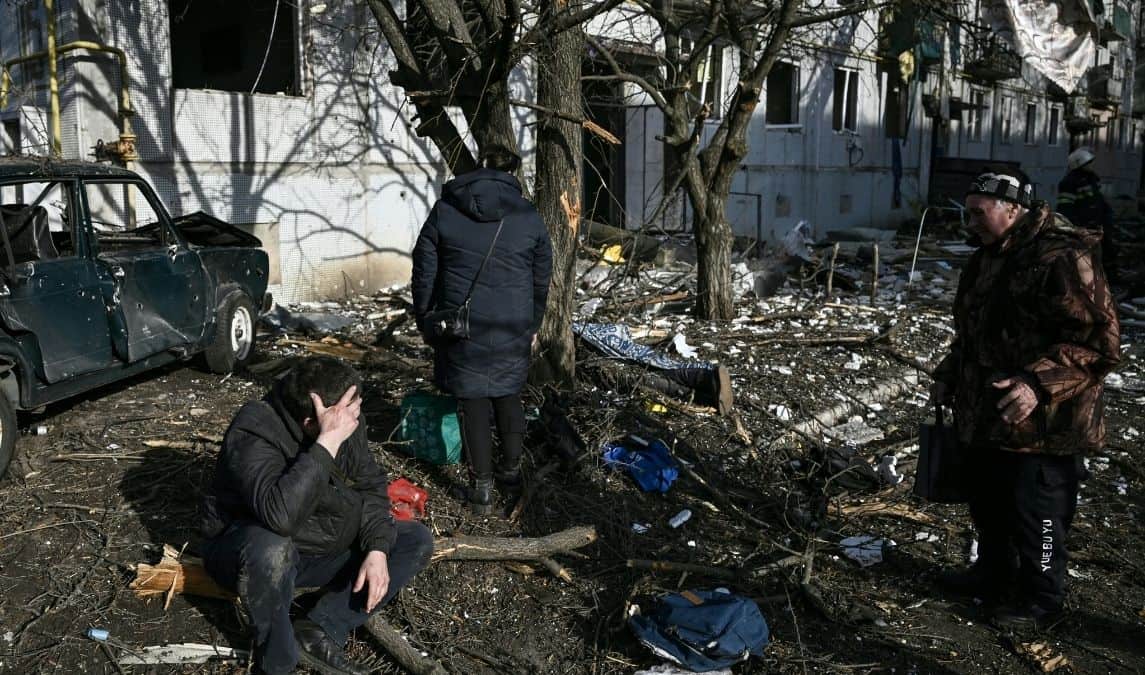 Yevgeny Kaplin, head of the humanitarian organisation Proliska, said attacks were going on across the entire frontline that had divided Ukrainian forces from an enclave held by Russian-backed rebels.

But poor communications were hampering information coming about victims.

"The offensive is underway along the entire demarcation line in the Lugansk and Donetsk regions," he said.

"Fighting is happening everywhere. We cannot yet receive information about victims, because there is no communication in this area." 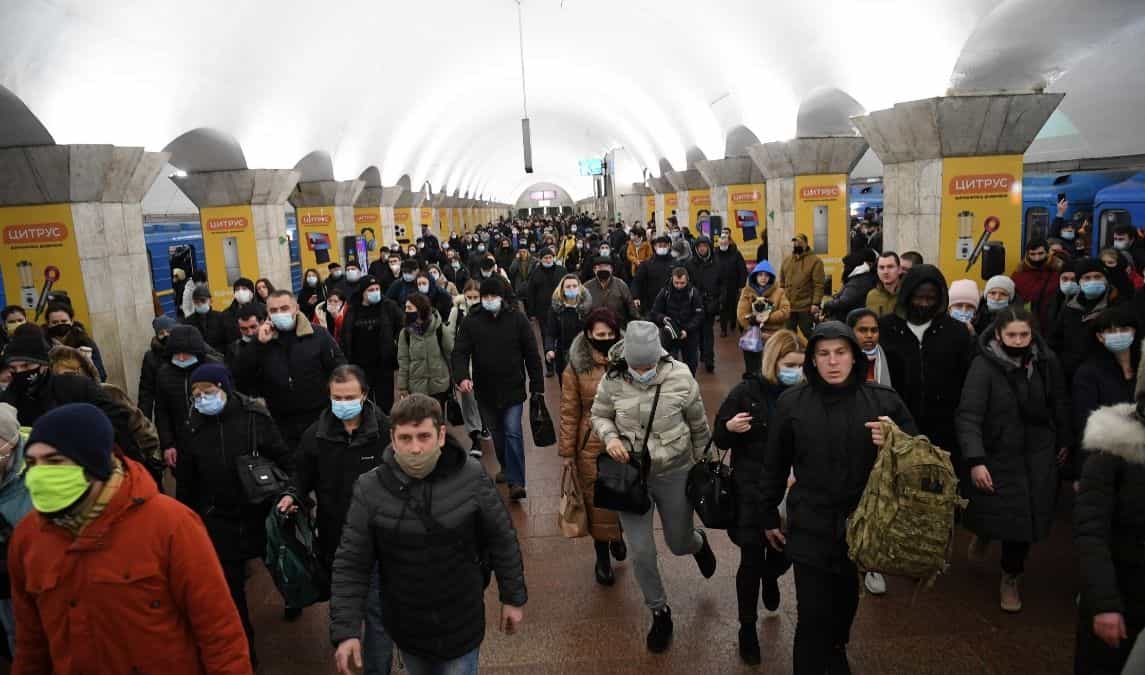 Ksenya Michenka looked deeply shaken as she took cover with her teenage son -- their cat peeking out of a bag -- in a metro station off Kyiv's historic Maidan Square. Michenka said she ran to the subway station for cover "because Russia has started a war against Ukraine."

"We need to save our lives," she said in a tense voice. "We hope the metro can save us because it is underground." 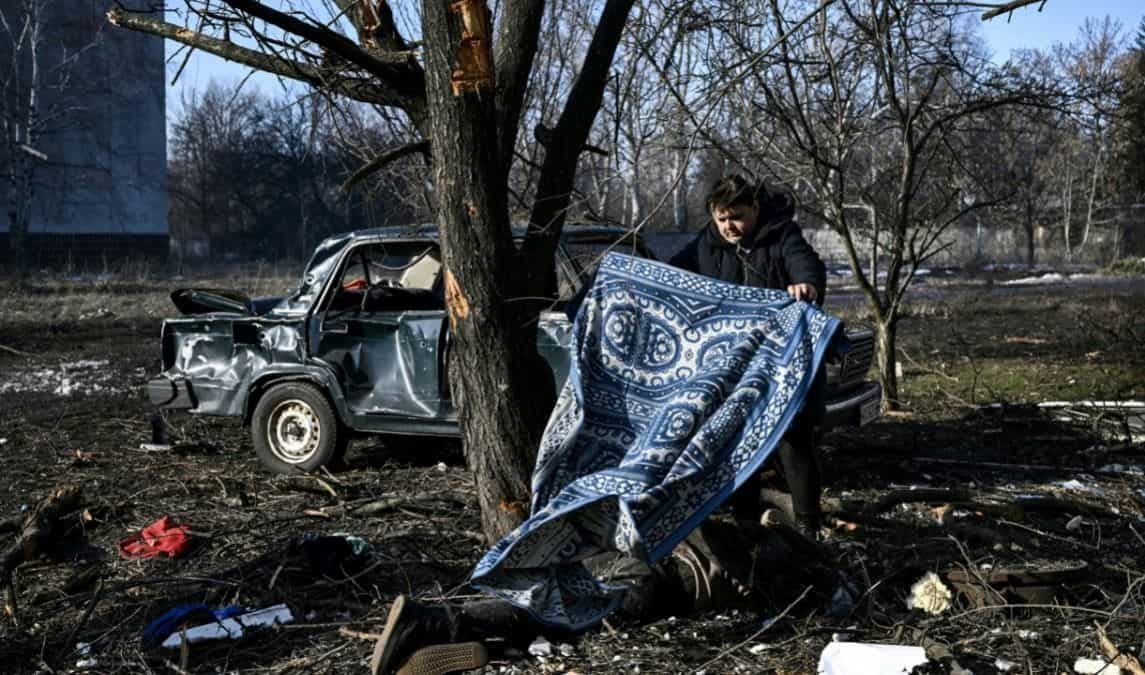 People stand by the body of a relative stretched out on the ground after bombings on the eastern Ukraine town of Chuguiv, as Russian armed forces try to invade Ukraine from several directions, using rocket systems and helicopters to attack Ukrainian position in the south, the border guard service said. Woken up by echoing blasts

Many in the city of three million people woke up to a series of terrifying booms echoing somewhere in the distance in the deep of night.

"I woke up because of the sounds of bombing," said 29-year-old Maria Kashkoska as she sat on the subway station's floor.

"I packed a bag and tried to escape. We are sitting here, waiting," she said after packing her charger and a few essentials.

The booms were followed a few hours later by air raid sirens that sounded over Kyiv at the break of dawn. 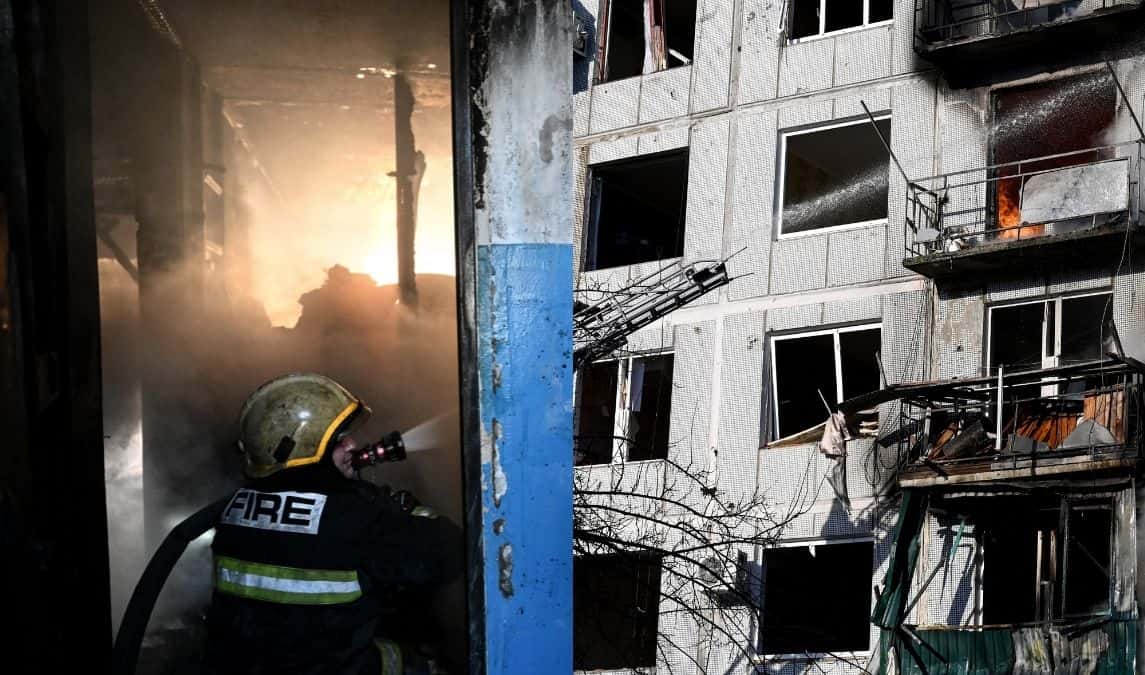 A missile crater, some four to five metres wide, was scoured into the earth between two devastated five-storey apartment buildings. Firefighters battled to extinguish the remains of a blaze.

Several other buildings on the street were seriously damaged, their windows shattered and doorframe hanging in the frigid morning air. 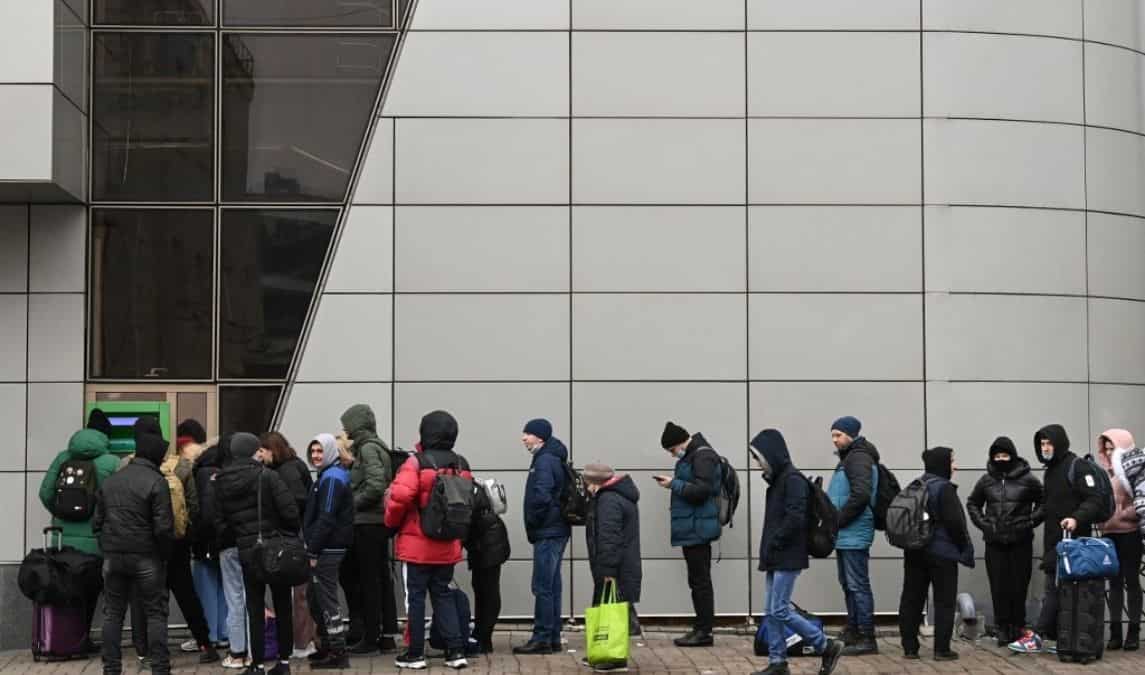 Even as Russian military says Ukraine civilians have 'nothing to fear', people line up to withdraw money at a cash dispenser in Kyiv in the morning of February 24, 2022. 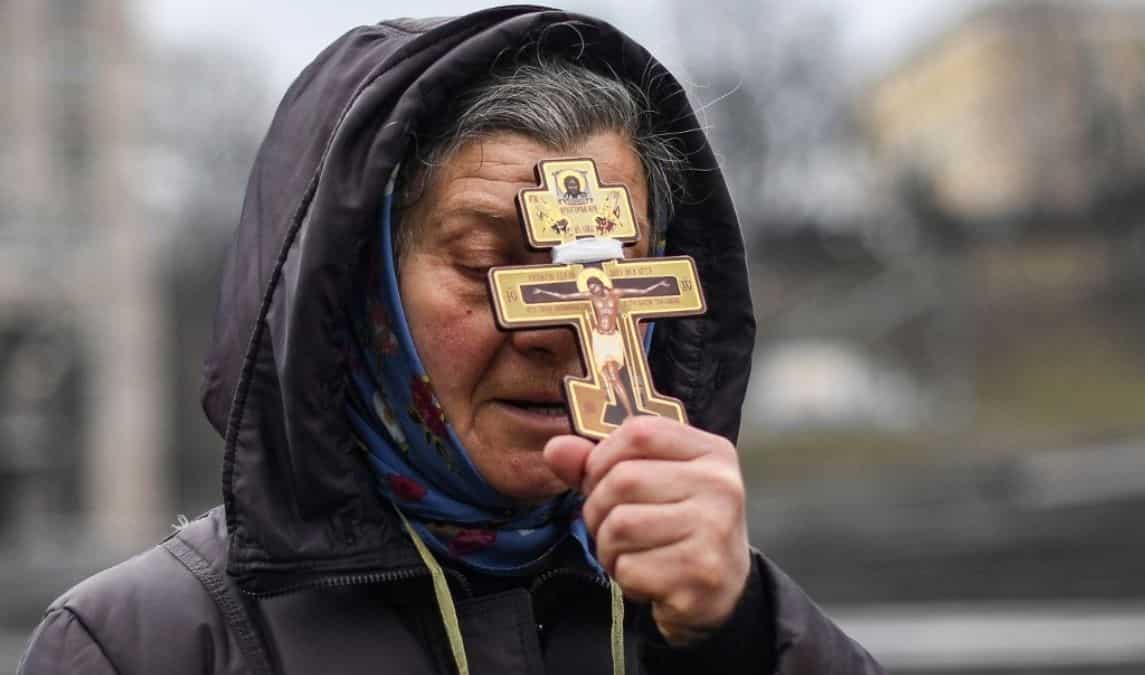 A religious woman holds a cross as she prays on Independence square in Kyiv.

Ukrainian leader Volodymyr Zelensky on Thursday broke off Kyiv's diplomatic relations with Moscow in response to Russia's invasion of its Western-backed neighbour.

"We broke off diplomatic relations with Russia," Zelensky said in a video message. It marked the first rupture in ties since Russia and Ukraine became independent countries after the Soviet Union's collapse in 1991. 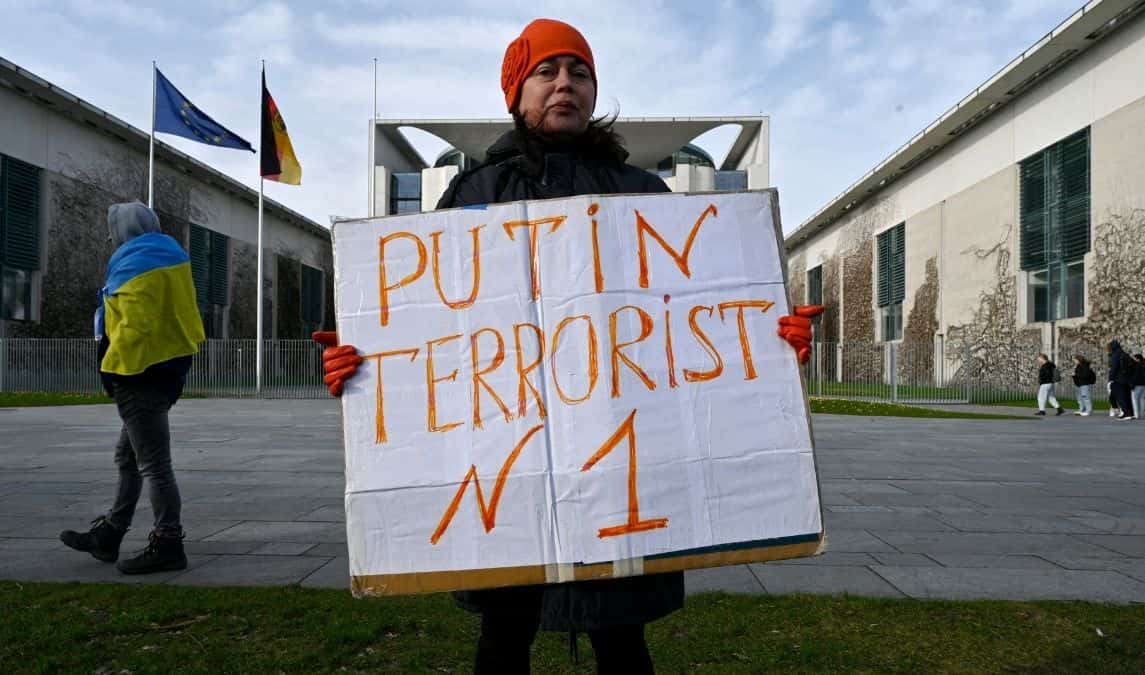 A demonstrator poses in front of the German Chancellery in Berlin with a placard that reads 'Putin Terrorist Nr 1', following Russia's military operation in Ukraine. Russian President Putin launching of an air and ground assault on Ukraine has forced residents to flee for their lives, leaving many civilians and at least five Ukrainian soldiers dead.