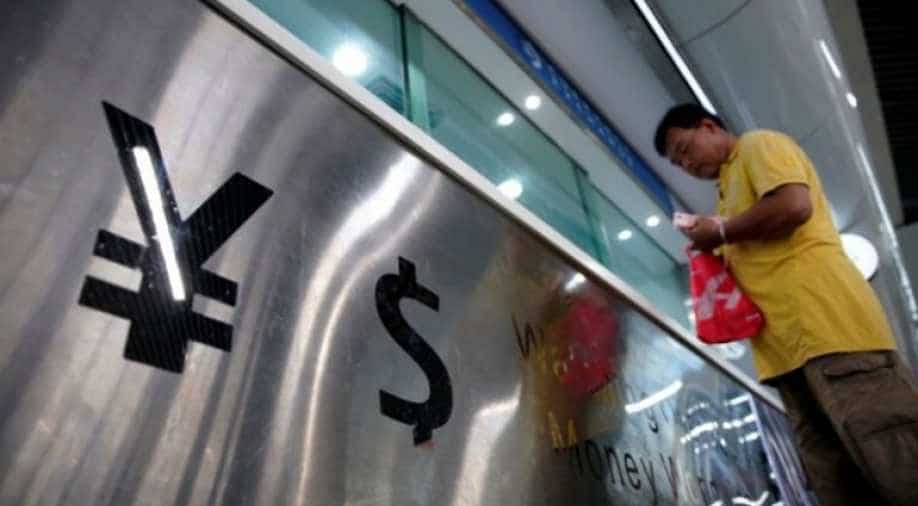 Signs of Chinese yuan and U.S. dollar are seen at a currency exchange store in Shanghai, China. Photograph:( Reuters )

James Daniel, director of the IMF's China department, said that an assessment of China's economic policies found the yuan exchange rate in 2018 to be 'not significantly over-valued or under-valued.'

The International Monetary Fund on Friday stood by its assessment that the value of China's yuan was largely in line with economic fundamentals, but an IMF official said the fund was encouraging China to pursue a more flexible exchange rate with less intervention.

James Daniel, director of the IMF's China department, said that an assessment of China's economic policies found the yuan exchange rate in 2018 to be "not significantly over-valued or under-valued."

The IMF's views on the yuan are at odds with those of its largest shareholder, the United States, which this week declared China a, currency manipulator after it allowed the yuan to slip below 7 to the dollar to 11-year lows.

US Treasury Secretary Steven Mnuchin is seeking to engage the IMF to help correct an unfair trade advantage from Beijing's currency actions, but Daniel declined to say how the IMF was responding to the request.

"Our discussions with the US treasury are ongoing on a range of issues," Daniel told reporters on a conference call, echoing an earlier statement from an IMF spokesperson.

The IMF said in the report that a worsening of trade tensions with the United States could put China's economic and financial stability at risk, making new fiscal stimulus measures from the government warranted.

The IMF stated, if the United States were to impose 25per cent tariffs on a remaining $300 billion list of Chinese imports, this would reduce China's growth by around 0.8per cent points over the following 12 months, driven by a sharp fall in demand and a tightening of financial conditions. Negative global spillovers could be significant, it added.

Daniel said that a 10per cent tariff on this category of goods as US President Donald Trump intends to impose on Sept. 1  could result in a 0.3per cent point cut to growth.

Weighed down by weak demand at home and abroad, China's growth slowed to 6.2per cent in the second quarter, a near 30-year low.

He also said the IMF was pressing China for structural reforms to its economy, including opening more sectors to foreign competition and reducing the role of the state in the certain industry goals also broadly sought by the Trump administration.

"We see continued rebalancing and opening up by China and increased exchange rate flexibility as being in China's interests and also benefiting the global economy."

IMF directors in a statement agreed with staff assessments that China's external position in 2018 was broadly in line with fundamentals.

But they also called for more transparency in China's exchange rate policies, the IMF said, with some seeking disclosures of China's foreign exchange market interventions.