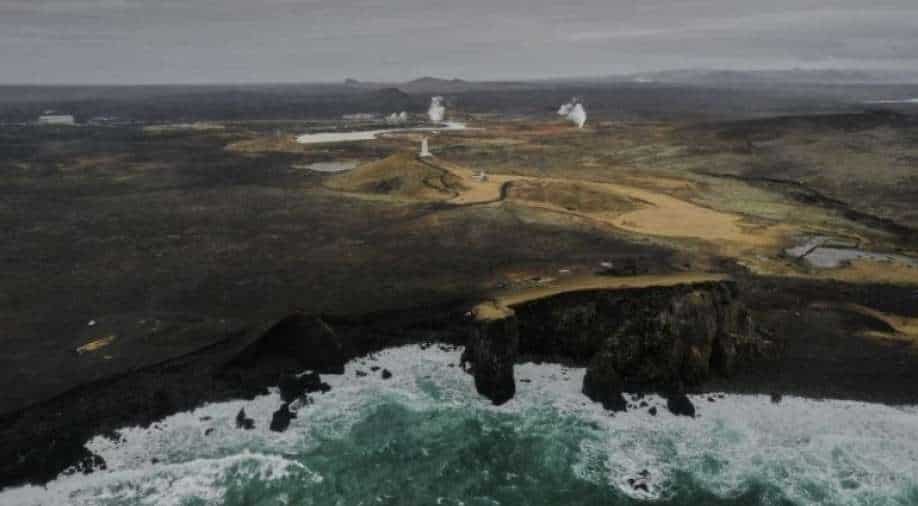 Aerial view taken on February 28, 2021 shows the lighthouse and the geothermal energy plant near the town of Grindavik on the Reykjanes peninsula, Iceland, some 50 kilometres west of the capital Reykjavik, atop the Mid- Atlantic Ridge, one of the three most seismically active areas on the planet. Photograph:( AFP )

A recent swarm of earthquakes across south-western Iceland have put officials on alert for potential volcanic activity.

Southwest Iceland is a seismically active part of the world. More than 20,000 earthquakes have shaken the region this week, rattling the capital city of Reykjavik and keeping geologists on their toes as all signs point to a pending volcanic eruption, the Icelandic Meteorological Office (IMO) reported.

Similar bursts of seismic activity in the country have previously caused volcanic eruptions, the office said.

Tremors signalling a potential eruption were detected on Wednesday afternoon, near Mount Keilir, inactive for the past 800 years, the Icelandic Met Office said.

A 5.7-magnitude earthquake was registered in the area last week.

"The magma is fracturing and it is so close to the surface... that we have to take it seriously," Freysteinn Sigmundsson, a geophysicist at the University of Iceland, told AFP.

While an eruption is possible, Sigmundsson cautioned that "it is not certain -- the situation can last for hours or even longer with many small earthquakes."

Police have cut off roads around the mountain, according to an AFP photographer near the area.

Although Keflavik International Airport and the small fishing port of Grindavik are only a few kilometres away, the area in the immediate vicinity is uninhabited and no evacuation was announced on Wednesday.

"In case of an eruption, we are expecting a small one, where lava is flowing. We are not expecting a large, explosive eruption. The impact on atmosphere, flights and living conditions of people will be minimal," Sigmundsson said.

Earlier today a tremor pulse was detected south of Mt Keilir, in the Reykjanes Peninsula, SW Iceland. No eruption has yet been detected but due to risks related to volcanic activity, all traffic near Keilir and Mt Fagradalsfjall is prohibited, including drone flights.

3/3 Yesterday around 3000 earthquakes were detected and from midnigh around 800 been detected. Most activity after midnight has been near Fagradalsfjall, has moved a bit NE, compared to yesterday. No tremor been measured during the night, but earthquake activity is still active

"I've lived in Grindavik all my life, but it's the first time we've had tremors this powerful and this frequent," said Kristin Birgisdottir, tourist chief in the small fishing town of just 3,500 inhabitants.

"It's always a bit of a strange experience. It's a bit scary, but you know the houses aren't going to collapse, so it's OK," said Erla Petursdottir, an HR manager.

Such intense seismic activity has not been recorded in the region since digital monitoring began in 1991.

Iceland is the most active volcanic region in Europe, with an eruption every five years on average.

The last eruption was at Holuhraun, beginning in August 2014 and ending in February 2015, in the Bardarbunga volcanic system in an uninhabited area in the south-east of the island.

That eruption did not cause any major disruptions outside the immediate vicinity.

But in 2010, an eruption at the Eyjafjallajokull volcano sent a huge cloud of smoke and ash into the atmosphere that led to the cancellation of more than 100,000 flights worldwide, stranding some eight million passengers.