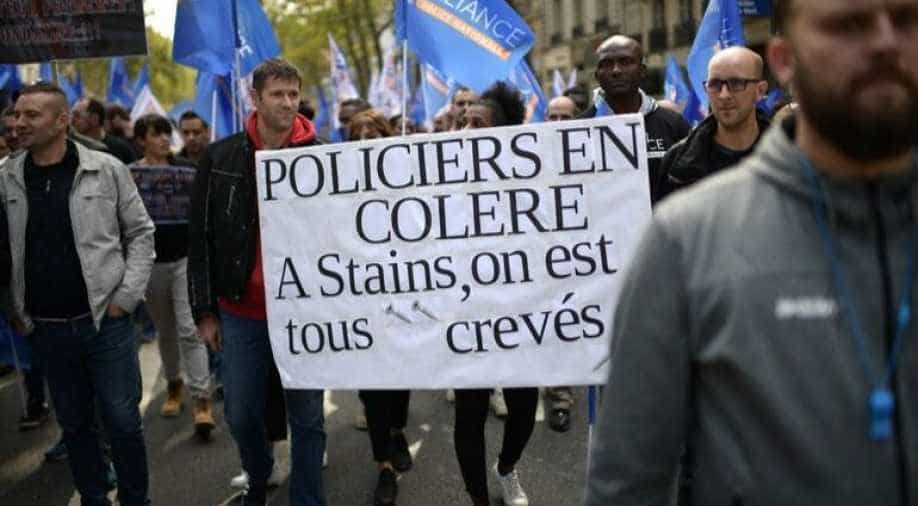 The demonstration was the biggest by the police in years, reflecting the frustration among officers after a year of battling weekly "yellow vest" protests that have regularly turned violent.

Thousands of French police officers demonstrated in Paris Wednesday for better working conditions, against the backdrop of a spike in suicides in the force and allegations of police brutality that have sapped morale.

The demonstration was the biggest by the police in years, reflecting the frustration among officers after a year of battling weekly "yellow vest" protests that have regularly turned violent.

Many of the officers, who gathered in plainclothes at Bastille Square for a "march of anger" through eastern Paris, complained of a lack of recognition and support from both the state and the public.

"We are the dregs of society," Frederic Govin, an officer from a riot police unit in northern France, told AFP bitterly.

Over the past few years, the police have held several protests over violent attacks on officers during anti-government protests as well as during operations in high-rise housing estates, where youths periodically clash with the police.

A key theme in Wednesday's protest was the sharp rise this year in the number of police taking their own lives.

Cyril Benoit, an officer with 20 years of service, told AFP that the weekly yellow vest protests had stretched an already strained force to the limit.

In the past two years, one officer in his riot police unit in the central town of Auxerre committed suicide and another attempted to take her own life, he said.

So far this year 49 officers have killed themselves, up from a total of 35 in 2018, according to interior ministry figures.

Benoit blamed the malaise on "physical and psychological fatigue" as well as increased pressure from senior officers to meet targets.

"There's always been a bit of pressure on the police but never like this," he said.

Under French law, the police are not allowed to strike or demonstrate while on duty.

Some officers told AFP they had been given leave by their station chiefs to skip work to attend the protest.

"I see colleagues crying," Antoine, a 40-year-old policeman with 15 years of crime-fighting to his name, told AFP.

He accused the government of failing to defend officers in the face of recurring allegations of brutality, particularly against yellow vest protesters, dozens of whom have been seriously injured by rubber bullets and stun grenades.

The police have also opposed a major overhaul of the pensions system, which could come of their perks scrapped.

"There is a deep sense of discontent", David Le Bars, general secretary of the SCPN-Unsa union said, describing an "ailing force."

Interior Minister Christophe Castaner has assured that the dangerous conditions faced by the police will be factored into the pension reforms.

He has also pointed to the money ploughed into the force under President Emmanuel Macron - more than a billion euros since the centrist leader took office in 2017, according to the minister.

During campaigning for president Macron pledged to hire an extra 10,000 police over the course of his five-year term.

But the new recruits cannot come fast enough for a force facing 23 million unpaid overtime hours, according to a count by Le Parisien newspaper in mid-September.

In the past few years, the number of protests by the police -- once a rare event -- have increased.

In October 2016, hundreds of officers, some in uniform, staged wildcat protests in several cities over several consecutive nights after youths in a Paris suburb tried to set fire to a police car with two officers inside, seriously injuring them.

Earlier that year, a police car was also firebombed on the sidelines of a separate police demonstration over anti-police violence.