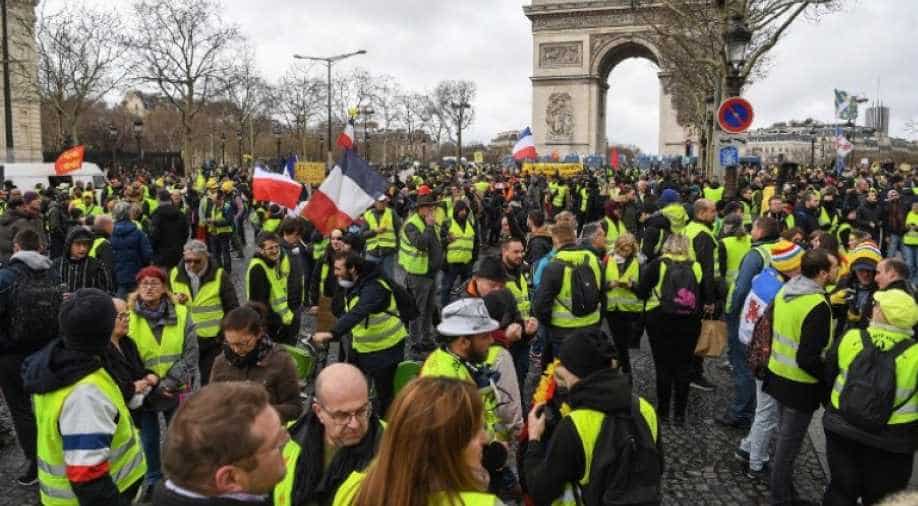 Their weekly demonstrations prompted Macron to loosen the state's purse strings to the tune of nearly $18.8 billion in wage boosts and tax cuts for low earners, but tapered off over the summer.

More than 7,000 police officers are to be deployed for rallies in Paris on Saturday over fears that yellow vest protesters and their radical, anarchist "black blocs" could try to infiltrate a march against climate change in the French capital.

The yellow vest movement erupted 10 months ago and blindsided President Emmanuel Macron, who protesters accused of being out of touch with the needs of ordinary French people.

Their weekly demonstrations prompted Macron to loosen the state's purse strings to the tune of nearly $18.8 billion in wage boosts and tax cuts for low earners, but tapered off over the summer.

Fresh yellow vest rallies are planned for Saturday but it remains to be seen whether the movement will regain the momentum of the winter and early spring, when the protests often descended into violent clashes with security forces, especially in Paris.

Macron on Friday called for "calm", saying that while "it's good that people express themselves", they should not disrupt a climate protest and cultural events also due to go ahead on Saturday.

Paris police chief Didier Lallement has said 7,500 police would be deployed for Saturday's rallies in Paris -- numbers on a par with the peak of the yellow vest protests in December and March.

Key yellow-vest figure Jerome Rodrigues has billed Saturday's protest as "a revelatory demonstration", claiming "many people are going to come to Paris".

But officials have again outlawed protests on the Champs-Elysees and other areas in the heart of the capital, where previously protesters had ransacked and set fire to luxury shops and restaurants.

Some demonstrators in January even used a forklift to break down the doors of a government ministry.

The police have also been criticised for being heavy-handed in clashes with hardcore anti-capitalist "black bloc" groups blamed for much of the violence that has accompanied the demonstrations.

Saturday coincides with the annual European Heritage Days weekend, when public and private buildings normally off-limits to the public are open to visitors.

After attracting 282,000 people nationwide on the first day of protests last November, yellow-vest protest participation had fallen sharply by the spring, and only sporadic protests were seen over the summer.

Macron said in an interview with Time magazine published Thursday that the movement had been "very good for me" as it had made him listen and communicate better.

"My challenge is to listen to people much better than I did at the very beginning," the president said.