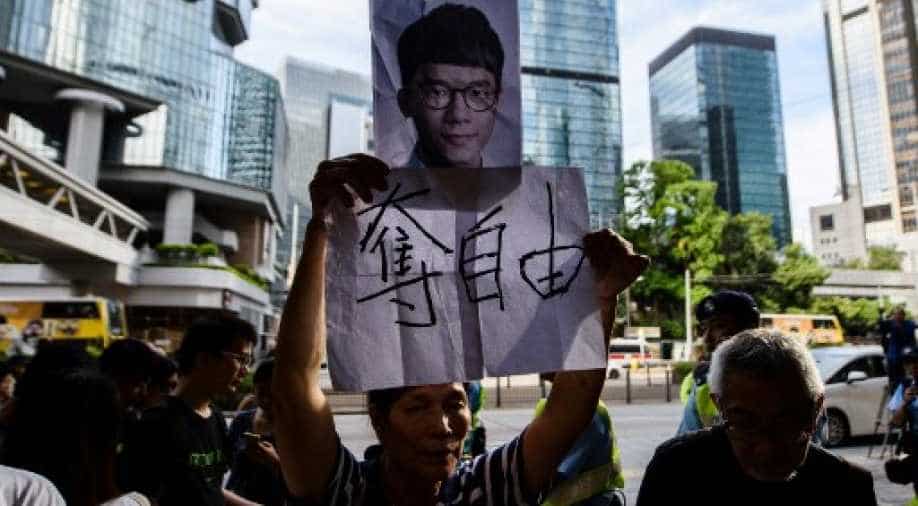 Nathan Law, who one of the most prominent activists in the pro-democracy protests taking place in Hong Kong since last year, cited 'unknown dangers' as the reason behind his decision.

Law, who one of the most prominent activists in the pro-democracy protests taking place in Hong Kong since last year, cited "unknown dangers" as the reason behind his decision.

8. So I bade my city farewell. As the plane took off the runway, I gazed down at the skyline I love so much for one last time. Should I have the fortune to ever return, I hope to still remain as I am: the same young man with these same beliefs. Glory to Hong Kong. THREAD ENDS. pic.twitter.com/Pf94W8YQu6

The former member of Demosisto, the pro-democracy party which was disbanded after the national security law was imposed, posted a detailed thread on Twitter handle to announce the move.

In a short English message to journalists, Law said: "I have already left Hong Kong and continue the advocacy work on the international level."

1. THREAD: No Hong Konger is under the illusion that Beijing has any intention to respect our basic rights and honor its promises to us. Mass arrests have already begun on the first day of the National Security Law's implementation.

He declined to say which country he had gone to.

"Based on risk assessment, I shall not reveal too much about my personal whereabouts and situation now," his message stated.

The revelation Law had left the city came as the local government released a statement confirming that a popular protest slogan used over the last year has now become illegal under Beijing's new law.

6. I thank my friends for their understanding, and I apologize for the ambiguities when it comes to my personal information. Criticisms ahead of me will stem not only from misunderstanding, disheartenment, and anxieties, but also ill intentions. These are all mine to face.

"Liberate Hong Kong, Revolution of our Times" had become a clarion call for pro-democracy protesters over the last year, chanted by huge crowds and plastered on banners.

In a statement, Hong Kong's government said the phrase was now illegal because it "contains the indications of Hong Kong independence, or alienating Hong Kong from China, or changing its legal status, or subverting the state".

7. But one shall never walk alone on the right path. The July 1 crowds show once again that the fire of Hong Kongers' determination will not be easily extinguished. We must sustain our resistance on all fronts.

On Wednesday, the first arrests were made under the legislation, mainly for protesters found in possession of pro-independence flags or stickers.

Law was a founding member of Demosisto, a pro-democracy party that disbanded earlier this week in response to the security law.

China had unveiled a national security law this week which Hong Kong pro-democracy protesters and the West say breaches the "one country, two systems" principle enshrined in the 1984 Sino-British treaty that guaranteed the autonomy of Hong Kong.