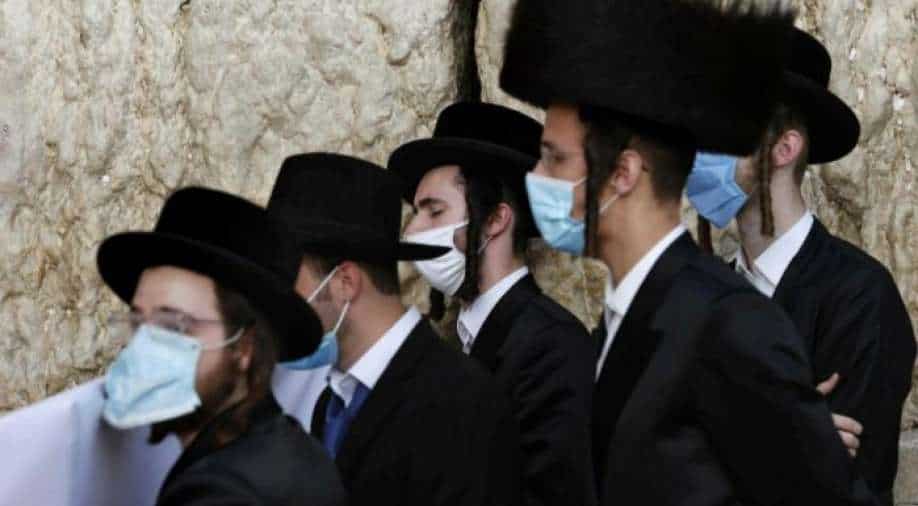 The crowd was protesting the enforcement of restrictions in schools and yeshivas in Haredi neighbourhoods.

Israel's ultra-Orthodox, or Haredim, have been at the centre of the country's struggles to control the spread of coronavirus.

The crowd was protesting the enforcement of restrictions in schools and yeshivas in Haredi neighbourhoods.

Earlier on Sunday evening, a huge gathering of approximately 10,000 ultra-Orthodox Jews had filled Bnei Brak's streets, to mark the funeral of a senior rabbi who died after contracting Covid-19.

Israel Police had earlier spoken to high-ranking rabbis in the hours following the death of Rabbi Chaim Meir Wosner, a senior rabbinic authority and the dean of the Hachmei Lublin Yeshiva there to prevent mass gatherings similar to those at ultra-Orthodox funerals during the last week.

Wosner died at the age of 83. He contracted the Wuhan virus at a wedding last month. Police set up barricades around the funeral procession; protestors knocked them down and clashed with the police. This is just the latest such case of non-compliance.

Last month, similar scenes were witnessed in Jerusalem twice. Thousands of ultra-orthodox mourners attended the funerals of two prominent rabbis — both of whom were almost 100 years old and died of the Wuhan virus.

The pandemic-exhausted nation turned its rage on its supremely conservative community. Police deployed water cannons and arrested dozens of people. This happened on January 24. A crowd of orthodox Jewish demonstrators clashed with the police.

They wanted a school to be opened, to pray in synagogues, and organise mass weddings and funerals despite government restrictions. The community is being called a serial violator of rules.

The trend reflects in pandemic numbers. Orthodox Jews make up just over 10% of Israel's population of 9.2 million.

But they account for one-third of the Wuhan virus cases. They’ve been branded as Israel’s super spreaders. But action against them may be restricted to water cannons.

Israel is heading for polls, and orthodox Jews have a prominent voice. The parties they support called the Haredi religious political party often play kingmakers in Israel’s tight electoral contests.

They currently hold 16 seats in a parliament that has 120 seats.