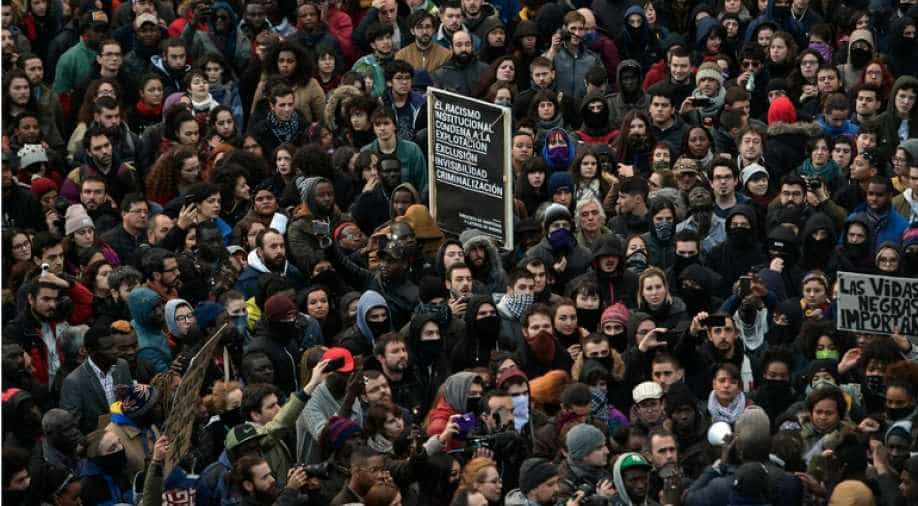 People attend a gathering to protest against the death of a street hawker in central Madrid. Photograph:( AFP )

Hundreds of people held a peaceful protest in central Madrid on Friday to demand better police treatment of street vendors, a day after the death of a Senegalese man sparked clashes with riot police.

Six people including a minor and a woman were also arrested and 10 officers were left injured while emergency services said four people were slightly hurt in the protest on Friday.

The protesters gathered in a square in the Lavapies district of the Spanish capital in the early evening on Thursday, many of them young, dressed in black and wearing bandanas as tensions remained high a day after violent clashes over the controversial death of a Senegalese street vendor.

On Thursday, 35-year-old Sengal street vendor Mame Mbaye Ndiaye suffered a heart attack in the street while walking away from police. Fellow vendors said police chased him through the streets, forcing him to run with his heavy merchandise wrapped in a sheet.

He died of cardiac arrest in a street close to his home in Lavapies some 15 to 20 minutes later.

That evening protesters threw stones and set dustbins alight in Madrid’s Lavapies neighbourhood, home to many migrant communities and near to where Ndiaye died.

Friday’s gathering in a square in Lavapies passed without violence. Protesters held signs reading slogans such as “Enough of police harassment” and chanted “Police murderers”.

Some shouted "kill police", an AFP journalist heard. Marches were also held in Barcelona and Bilbao.

The city hall announced a full investigation, asking for CCTV footage to try and determine exactly what happened, as the plight of street vendors in Spain suddenly lept to the fore.