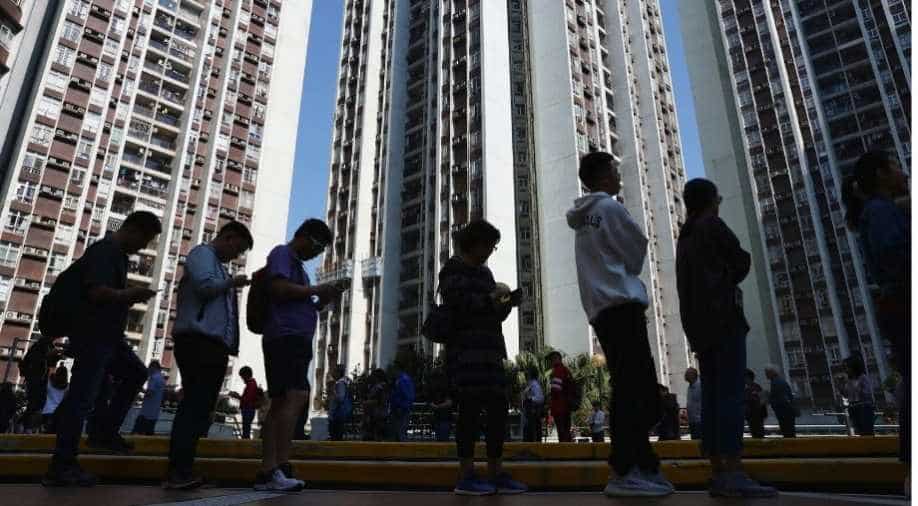 Hong Kong voters at some polling stations for district council elections were queuing up by the hundreds on Sunday morning, citing concerns voting could be halted later in the day after six months of sometimes violent unrest in the Chinese-controlled city.

Many see the polls as a "referendum" on support for the anti-government protest movement, coming as the city grapples with its biggest political crisis in decades.

A stand-off at Polytechnic University on Sunday entered its seventh day, with the campus surrounded by police as some protesters remained in classrooms and first-aid workers roamed the campus.

As voting got underway at 7:30 am (2330 GMT on Saturday), Reuters witnesses said there was only a small police presence, in contrast to earlier reports that riot police planned to guard all polling stations and almost all officers in the 31,000 strong force would be on duty.

Kevin Lai, a 45-year-old IT worker near the front of the line outside Wong Tai Sin primary school in Kowloon, said he came early over fears he wouldn't be able to vote later.

"Some people are afraid the elections will be stopped by unpredictable reasons — maybe some protests," he said as hundreds of voters in the landlocked neighbourhood of housing estates wound around a block waiting their turn.

"We have to show we stand with Hong Kong," Lai said. "Most of the councillors stand with the government and are not helping Hong Kong."

Chan, 31, who was in front of the queue at the Fung Kam Sports Centre in Yuen Long, a rural district near the Chinese border, said she came early because she was expecting a big turnout.

"I have not seen an election like this before, but because of the situation it is important to vote .. .and I know many people feel like me," said Chan, who works in sales.

She said she grew up in Yuen Long but did not want to reveal any political allegiances. As she spoke, election officials prepared the ballot box in the middle of a basketball court. A lone police officer watched them.

The Fung Kam polling station is one of the closest to the Yuen Long railway station where suspected triad gangsters attacked anti-government protesters and commuters on July 21.

A record 1,104 people are running for 452 district seats and a record 4.1 million Hong Kong people have enrolled to vote for district councillors, who control some local spending, and whose daily decisionmaking spans a range of neighbourhood issues including recycling, transport and public healthcare.

Beijing-backed Lam cast her ballot at 8:30 a.m. in front of television cameras.

Some of the seats that were once uncontested, and dominated by pro-Beijing candidates, are now being fought for by young pro-democracy activists.

One of the candidates running in Sha Tin is Jimmy Sham of Civil Human Rights Front, organiser of some of the mass anti-government rallies in recent months who was beaten by men with hammers in October.

The protests started over a now-withdrawn bill that would have allowed people to be sent to China for trial, but which soon evolved into calls for full democracy, posing the biggest popular challenge to Chinese President Xi Jinping since he came to power in 2012.