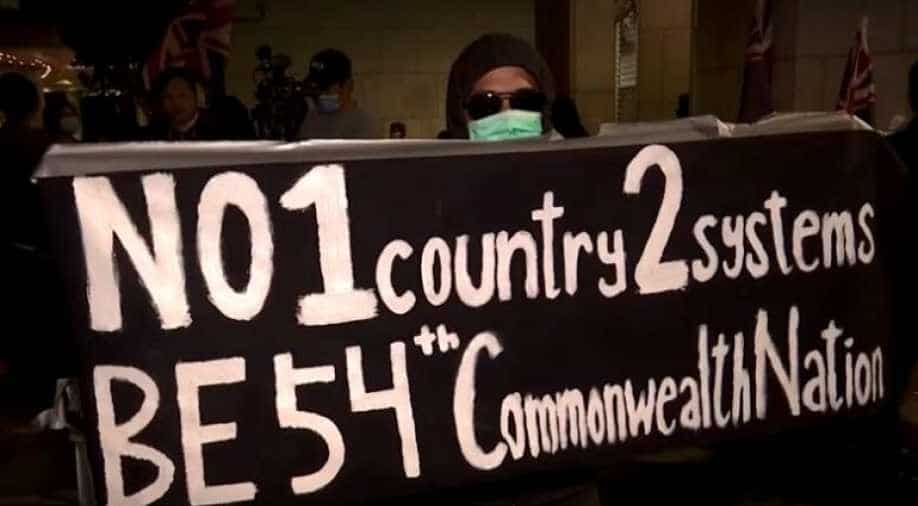 Before the rally formally began, a petition was handed over to a representative of the British Consulate which mentioned all their demands

Protesters clad in masks rallying outside the British Consulate in Hong Kong today requested the United Kingdom to declare that China has breached the Joint Declaration and allow it to rejoin the Commonwealth.

"It (the UK) should also help tackle the humanitarian crisis in Hong Kong, and also render any necessary assistance to Hong Kong people", said Panzer Chan, 31, an office clerk.

Before the rally formally began, a petition was handed over to a representative of the British Consulate which mentioned all their demands, including the call for realigning with the Commonwealth.

The Sino-British Joint Declaration was signed in 1984 by then Prime Minister of Britain Margaret Thatcher and the Chinese Premier Zhao Ziyang. The declaration outlined phases in which Britain would end its rule over Hong Kong, which went on for a century and a half.

It was under this declaration that the ''one country-two systems'' ideation was formalised and rights not available to Mainland Chinese citizens were given to Hong Kongers.

According to protesters, China has not lived up to the declaration and has trespassed Hong Kong's autonomy.

"The Chinese just keep crossing the line," said one rally participant, giving his name as Mr K. "I think we have to just kick the Chinese out", he added.

Hong Kong has been marred by pro-democracy protests in the last few months.