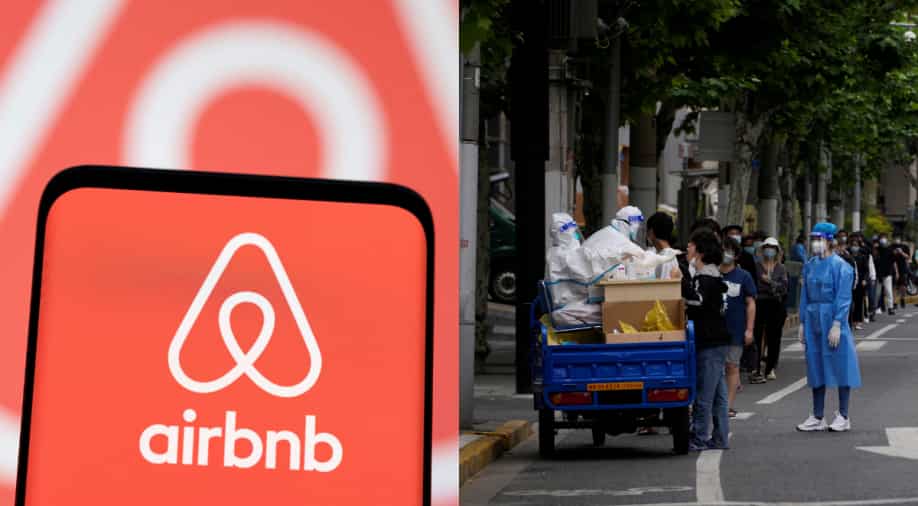 In this combination of images, Airbnb's logo can be seen along with residents in Shanghai lining up for nucleic acid tests on a street during a lockdown Photograph:( Reuters )

Joining a long list of Western internet platforms that have opted out of the China market, vacation rental firm Airbnb Inc is shutting down its business in China from July 30.

Citing a source close to the company, AFP reported that Airbnb has taken the decision because the lockdown in China shows no sign of ending any time soon.

According to the source, Airbnb will no longer book stays or visitor "experiences" in China. Instead, it will focus on helping people there with travel plans outside the country.

The "zero-COVID" approach adopted by the Chinese Communist Party has been biting into prospects for the world's second-biggest economy.

The San Francisco-based company launched its business in China six years ago and has booked stays at homes there for some 25 million guests.

Nathan Blecharczyk, co-founder of Airbnb, wrote in the letter, “We have made the difficult decision to refocus our efforts in China on outbound travel and suspend our homes and Experiences of Hosts in China, starting from July 30, 2022.”

It comes after Western internet firms such as Linkedin and Yahoo retreated from China citing reasons ranging from censorship to operation difficulties in the country.

Also read | Amid Russian invasion, over 61,000 Airbnb bookings made in Ukraine in 48 hours. Not for staying

“The decision was not easy for us and I know that it is even more difficult for you,” Blecharczyk said.

“We’ve built and grown a thriving Host community in China together and have welcomed more than 25 million guest arrivals since 2016.”

According to a report published in the New York Times, stays in China have accounted for roughly 1 per cent of Airbnb’s business in recent years.

Out of Airbnb's six million all across the globe, it had 150,000 listings in China which will be closed but Chinese users would still be allowed to book listings and experiences abroad.