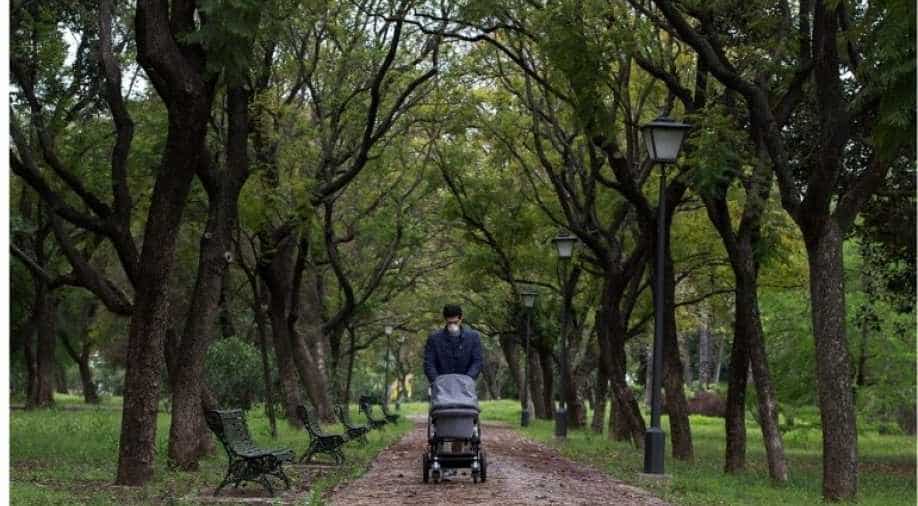 A man wearing a face mask pushes a baby carriage in a park in Seville on April 26, 2020 amid a national lockdown to prevent the spread of the COVID-19 disease Photograph:( AFP )

Spain has a loophole in its lockdown rules: people with pets may leave their homes to walk their pets. However, not everybody is walking their pets

As the world deals with lockdown blues, people are coming up with strange excuses and strategies to circumvent the rules.

In India, a man bought a huge stock of onions so that he may be able to move from the southern part of the country to its northern state.

The hardest hit continent - Europe has largely remained under lockdown over the last few weeks. However, as the recovery rate starts to improve and the number of infections continue to drop, people are sneaking out and about.

Spain has a loophole in its lockdown rules: people with pets may leave their homes to walk their pets. However, not everybody is walking their pets.

With no clear dictation of what encapsulates pets, people have taken full liberty.

Just on Friday, the Spanish National Police shared an image on Twitter whereby a man was fined for walking an unusual pet… a fish in a bowl! The incident happened in Lograno, a town in northern Spain. He was later penalised by the authorities for breaking the code.

The tweet below translates into "Agents of the police force have found a person for going out to "walk" their fish on the street. Agents spotted him on #Logroño carrying a fish tank against what is stipulated in the RD of the State of Alarm."

Earlier, on March 25, a man was seen walking his hen. Take a look below!

The police tweeted, "Civil guards of #Lanzarote fined a person for failing to comply with the movement limitation measures imposed by the state of alarm while walking a hen".

In another bizarre incident in Spain, an unidentified citizen in Murcia was seen dressed as a Tyrannosaurus rex. The images went viral on social media!

It only gets stranger in the land of Spain: Another person was arrested for walking a toy dog on a leash. Video below:

After this clip went viral, the police announced: "Do not try to deceive us!"

Spain recently decided to extend its lockdown until May 9, to ensure that the slowing rate of infections continues steadily. In Spain alone, over 20,000 people have died of the virus so far. If the lockdown officially ends on May 9, the country would have spent six weeks under lockdown in total.