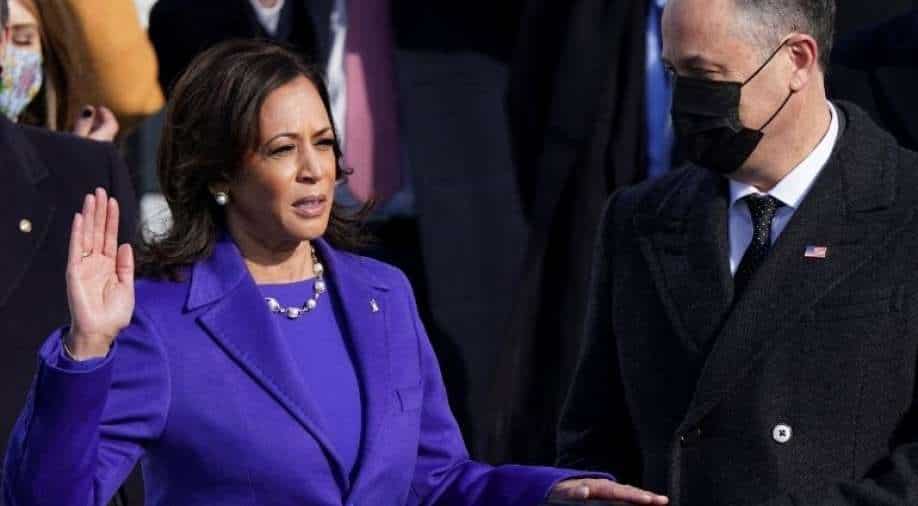 Kamala Harris is sworn in as U.S. Vice President as her spouse Doug Emhoff holds a bible during the inauguration of Joe Biden as the 46th President of the United States on the West Front of the U.S. Capitol in Washington, U.S., January 20, 2021 Photograph:( Reuters )

Kamala Harris on Wednesday became the first woman Vice President of the United States, during a ceremony which took place at the West Front of the Capitol

Kamala Harris on Wednesday became the first woman Vice President of the United States, during a ceremony which took place at the West Front of the Capitol. 56-year-old Harris is the country's 49th Vice President and will serve as the deputy of 46th American President - Joe Biden.

Harris took over the duties of VP from Mike Pence, while Biden succeeded Donald Trump.

Also read: As Joe Biden and Kamala Harris make history in US, reactions from world leaders pour in

Harris is the daughter of Indian immigrants coming from Chennai. Her husband is also making history. Douglas Emhoff is the first "Second Gentleman" of the United States.

Harris' oath was administered by Justice Sonia Sotomayor, the first Latina member of the US Supreme Court. Harris was sworn in on two Bibles - one belonging to a close family friend Regina Shelton, and the other belonging to Thurgood Marshall - the first African American Supreme Court justice.

Harris' mom is Indian, while her father is from Jamaica. She was born in Oakland, California in 1964.