Half of rebel-held Aleppo falls to Syrian forces 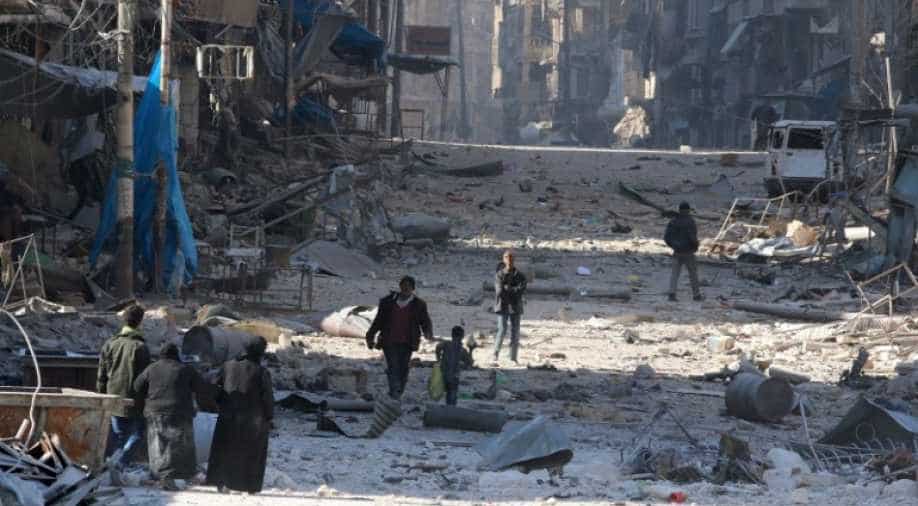 The rebels put up fierce resistance in the southeastern outskirts of the war-battered city, but government forces closed in on opposition territory from the east. Photograph:( Reuters )

Syrian forces have recaptured half the former IS stronghold of east Aleppo, a monitor said on Friday.

President Bashar al-Assad’s forces have made quick gains since their offensive against Aleppo began on November 15.

Rebels put up fierce resistance in the southeastern outskirts of the war-battered city, but government forces closed in on opposition territory from the east.

Meanwhile, around 2,000 people, including rebel families, evacuated the suburb of Tal near Damascus, as part of a deal between the Syrian government and the armed rebels, local media reports said.

Tens of thousands of civilians have also streamed out of Aleppo’s east, and Russia has renewed its calls for humanitarian corridors to allow aid to enter and desperate residents to leave.

"We have informed the UN in New York and Geneva that there is no longer a problem with the delivery of humanitarian cargo to eastern Aleppo," Russia’s foreign minister Sergei Lavrov said, AFP reported.

Moscow has announced several humanitarian pauses in Aleppo to allow civilians to flee, but until the recent escalation, only a handful did so.

"After the recent advances, the regime is comfortably in control of half of former rebel territory in the city's east," he said.

The loss of east Aleppo, which has been a rebel stronghold since 2012, would be the biggest-ever blow to Syria’s opposition.

Earlier on Friday, anti-government fighters had been successful in rolling back regime gains in Sheikh Saeed on Aleppo’s southeastern outskirts.

Hundreds of fighters from Syria’s elite Republican Guard and Fourth Division arrived in Aleppo on Friday in preparation for street-by-street fighting in these districts, the Observatory said.

It added that four civilians were killed in rebel rocket fire on government-held areas, bringing to 59 the civilian toll in the city's west.

More 300 civilians have been killed in east Aleppo since the offensive began, according to the Observatory.

Clashes rocked residential buildings in Aleppo’s eastern fringes on Friday, as regime forces sought to secure the road towards the airport.

US secretary of state John Kerry late on Friday said he had spoken to Lavrov about the situation in Aleppo.

"We are deeply concerned about the humanitarian disaster that continues to unfold in Aleppo," he said.

"It is absolutely vital that the killings be replaced by immediate moves of humanitarian goods."

Dozens of families trickled out on Friday, adding to the more than 50,000 people who have poured from east Aleppo into territory controlled by government forces or local Kurdish authorities, the Observatory said, AFP reported.

Among those fleeing are nearly 20,000 children, according to estimates by the UN’s children’s agency.

"What is critical now is that we provide the immediate and sustained assistance that these children and their families desperately need," UNICEF spokesman Christophe Boulierac told AFP.

"It’s a race against time, as winter is here and conditions are basic."

The conflict started in March 2011 with protests calling for Assad’s ouster, and has since evolved into a highly globalised war that has killed more than 300,000 people.