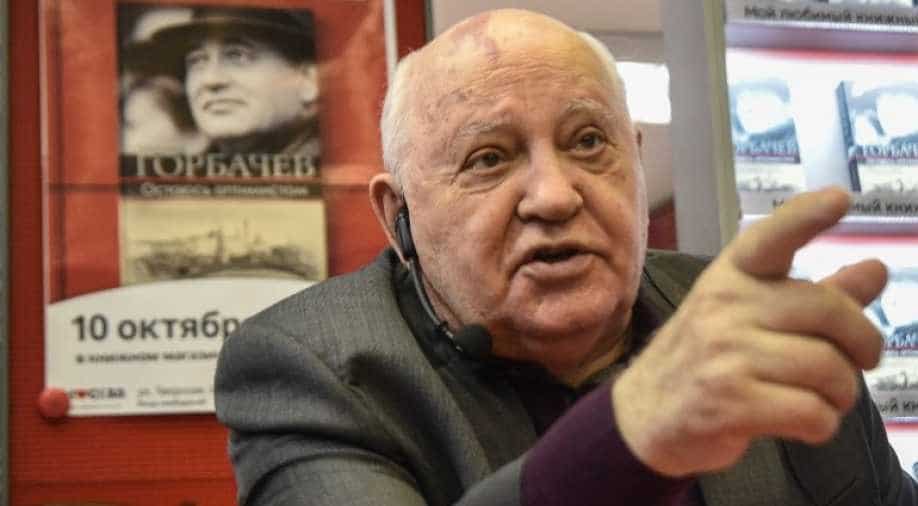 Mikhail Gorbachev said that according to the treaty the country exiting it should notify the global community of 'exceptional circumstances' that prompted it to do so.

The last Soviet leader Mikhail Gorbachev issued a stinging criticism of Washington on Wednesday, accusing it of misleading the world over its exit from a key arms treaty and seeking to gain military superiority at the expense of international security.

This month US President Donald Trump ripped up a key arms control agreement, the Intermediate-Range Nuclear Forces (INF) Treaty, that Gorbachev and Ronald Reagan brokered in 1987.

Gorbachev said that according to the treaty the country exiting it should notify the global community of "exceptional circumstances" that prompted it to do so.

In a column published by Vedomosti liberal daily, Gorbachev asked if  Washington, the world's biggest military spender, had been able to "explain itself to the international community" and the UN Security Council.

"No, this has not been done," Gorbachev said, adding that instead, the United States prefered to accuse Russia of violating the agreement.

The 87-year-old also claimed Washington misled the world when it said it needed to abandon the treaty also because China and other countries not bound by the INF pact were stockpiling missiles.

"This is not convincing either," he said, adding that Russia and the United States still controlled 90 per cent of all nuclear weapons.

"Behind the US decision to exit the treaty are not the reasons the US leaders are citing but something completely different," said Gorbachev.

It is, he said, "a desire by the United States to free itself of any constraints in the arms sphere (and) gain absolute military superiority."

"Presumably to impose its will on the world — and why else?"

The last Soviet leader also rubbished Trump's claim he wanted to "get everybody in a big and beautiful room and do a new treaty."

"What treaty? About an arms buildup?" Gorbachev asked.

He agreed with critics of the agreement that much had changed since the signing of the pact in 1987. But, he added, that was not a reason to dismantle the existing arms control regime.

He said the changes "call not for the abandonment of treaties that created the foundation of global security after the end of the Cold War but a further movement towards to the final goal —  the elimination of armaments."