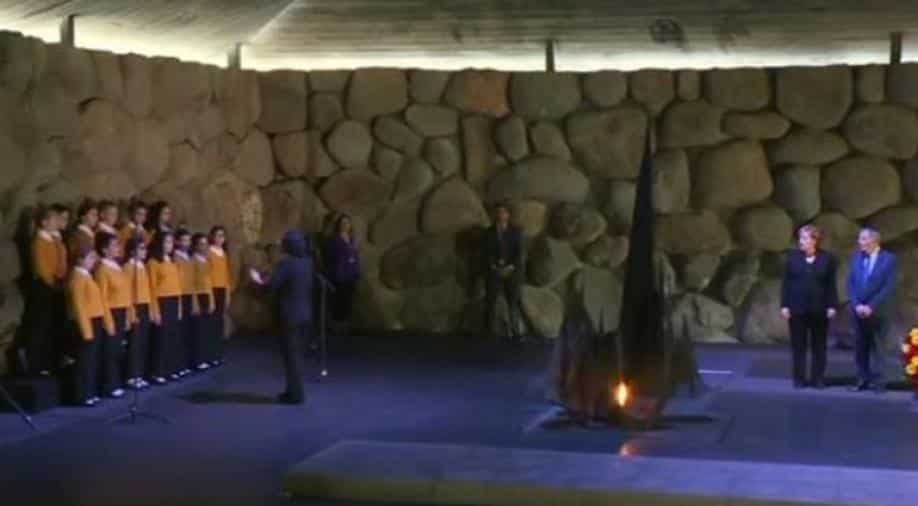 Head bowed, German Chancellor Angela Merkel paid homage in Jerusalem on Thursday (October 4) to the six million Jews killed by the Nazis and said Germany had a responsibility to confront anti-Semitism and never to forget the Holocaust.

She began a day of meetings between Israeli and German government officials with a visit to Yad Vashem, Israel's national Holocaust memorial, where she laid a wreath on a stone slab that contains ashes of death camp victims.

Merkel, wearing black, then clasped her hands in front of her and stood with head bowed next to the crypt in Yad Vashem's tent-shaped Hall of Remembrance.

In the stone hall, an eternal flame flickers from a base fashioned like a broken bronze goblet, illuminating the names of 22 of Nazi Germany's extermination and concentration camps engraved on the floor.

Merkel arrived in Israel on Wednesday (October 3) for a 24-hour visit as part of annual government-to-government talks between German and Israeli ministers, and had dinner with Prime Minister Benjamin Netanyahu at his Jerusalem residence.

The two leaders planned to meet again on Thursday for discussions expected to focus on Iran and the long-stalled peace process with the Palestinians, before holding a news conference.