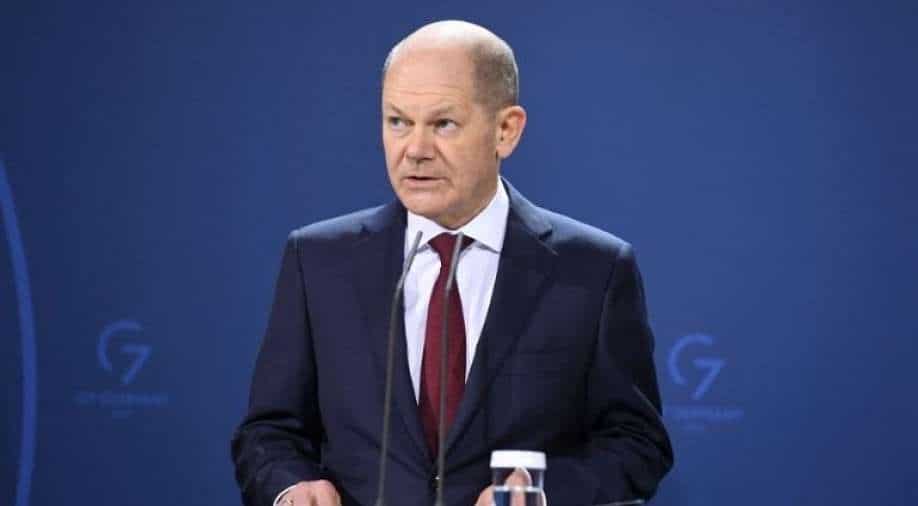 Ahead of the visit, a German official said Scholz would be 'actively urging for dialogue,' in which concrete steps toward de-escalation would be discussed

A day after President Joe Biden warned President Vladimir Putin of Russia that the costs of an attack on Ukraine would be severe, there was no indication that tensions were easing. Foreign embassies continued to withdraw nonessential staff, nations urged their citizens to leave the country, and the Russian military buildup in the region showed no signs of slowing.

While President Volodymyr Zelenskyy of Ukraine urged calm, and Russia continued to deny that it is planning to invade its neighbor, weeks of frenzied diplomacy showed little sign of progress.

Still, efforts to defuse the crisis are continuing, with Chancellor Olaf Scholz of Germany planning to travel to Kyiv, Ukraine’s capital, on Monday and Moscow on Tuesday.

“It is our job to ensure that we prevent a war in Europe, in that we send a clear message to Russia that any military aggression would have consequences that would be very high for Russia and its prospects, and that we are united with our allies,” Scholz told the upper house of the Bundestag, Germany’s Parliament, on Friday.

Ahead of the visit, a German official said Scholz would be “actively urging for dialogue,” in which concrete steps toward de-escalation would be discussed. While the German delegation would put its threat perception on the table, the official said the visit was aimed at gaining “a better understanding of Russia’s goals” and Scholz would be open to initiating a broader discussion about “Russian grievances.”

Berlin is viewed with skepticism by many in Ukraine for not providing military weapons to aid in its defense as other NATO allies have. Ukraine’s ambassador to Germany complained Sunday about “German hypocrisy” on Twitter, noting that Berlin sells materials to Russia that can increase weapons production.

Last week, Scholz traveled to Washington, where he met Biden in a key attempt to shore up the alliance between the United States and Europe’s most powerful economy. Biden vowed that a lucrative gas pipeline project connecting Russia and Germany, Nord Stream 2, would be halted if Moscow invades Ukraine.

Scholz has not explicitly said the pipeline will be canceled in the event of an invasion, but Biden said the two countries were crafting their policies “in lockstep.”

Scholz’s Social Democratic Party has historically favored strong ties between Germany and Russia and has struggled to develop a coherent stance in dealing with Putin. But German President Frank-Walter Steinmeier, who rose to political prominence as a member of the party, was unequivocal in his criticism of the Russian troop buildup. Reelected Sunday to a second five-year term, he warned Putin not to “underestimate the power of democracy” in his acceptance speech.

“We are in the midst of a military conflict, a war in Eastern Europe,” Steinmeier said. “Russia is responsible for that.”

He appealed directly to Putin, calling on him to “untie the noose around Ukraine’s neck and join us in finding a way to preserve peace in Europe.”

Ben Wallace, the United Kingdom’s defense secretary, criticized Western efforts at reaching a diplomatic solution with Russia as “appeasement” in an interview with the Sunday Times.

Western officials estimate that Russia has massed more than 130,000 troops on Ukraine’s northern, southern and eastern borders, which Wallace said was enough to “launch an offensive at any time,” something he said was “highly likely.”

While the menacing military buildup around Ukraine has been roundly criticized by most Western governments, Putin has found support in some other autocratic leaders.

Brazil’s populist president, Jair Bolsonaro, is expected to arrive in Moscow on Tuesday, the same day as Scholz, for a meeting with Putin. The visit is seen as part of Putin’s attempt to shore up his alliances with Latin American countries that have traditionally been close to the United States.

Bolsonaro, whose approval rating is at a low ahead of elections this year, said Saturday that he did not intend to raise the issue of a Russian invasion of Ukraine.

“We ask God that peace reign in the world, for the good of all of us,” he said in a radio interview.