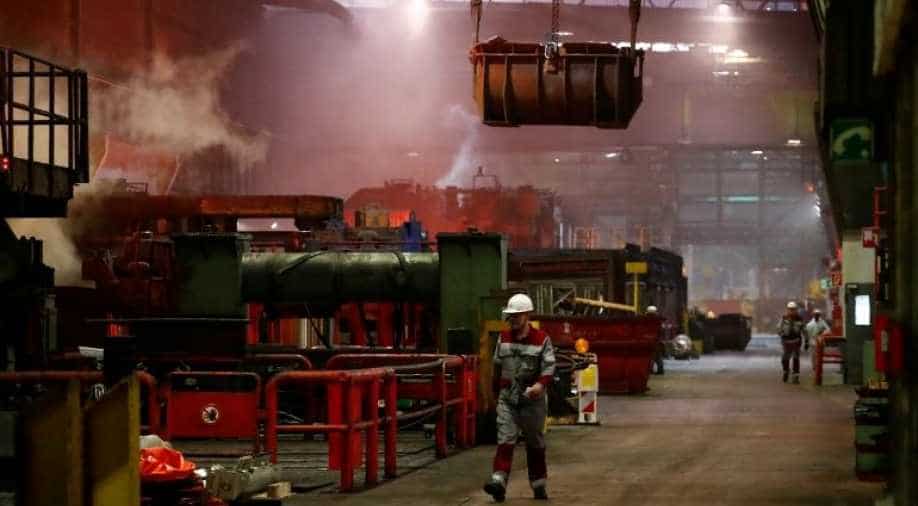 Steel workers of ThyssenKrupp walk through the hall of the rolling mill of its steel factory in Duisburg, Germany, January 30, 2020 Photograph:( Reuters )

Industrial output dropped by 17.9% on the month

German industrial output posted its steepest plunge on record in April as the coronavirus pandemic forced companies in Europe's largest economy to scale back production, data showed on Monday.

Industrial output dropped by 17.9% on the month, figures released by the Statistics Office showed. A Reuters poll had pointed to a drop of 16.0%.

Manufacturers of capital goods recorded the steepest decline of -35.3%. Construction was down 4.1% and output in the energy sector dropped by 7.2%.

As measures to contain the spread of the coronavirus were implemented from mid-March, the restrictions took their toll on a full scale in April, the Economy Ministry said.

"The low point has been reached. With the gradual easing of protective measures and the resumption of production in the automotive industry, the economic recovery is beginning now," the ministry added.

The data strengthens expectations that the German economy will post its steepest decline since the end of World War Two in the second quarter.

"German gross domestic product is likely to shrink by more than 10% in the second quarter, a reading never measured before in peacetime", VP Bank Group economist Thomas Gitzel said.

For 2020 as a whole, the government forecasts GDP will shrink by 6.3%, based on the assumption that a 130 billion euro ($146.69 billion) fiscal stimulus package will help economic activity pick up again in the second half of the year.

The Ifo economic institute said on Monday that manufacturers expect production levels to decline further in the coming three months, but at a slower pace than previously.

Ifo said its index for production expectations rose to -20.4 points in May from -51.0 points in April, marking the biggest monthly rise since German reunification three decades ago.

"But that only means that the nosedive is now becoming flatter," said Klaus Wohlrabe, head of the Ifo surveys.