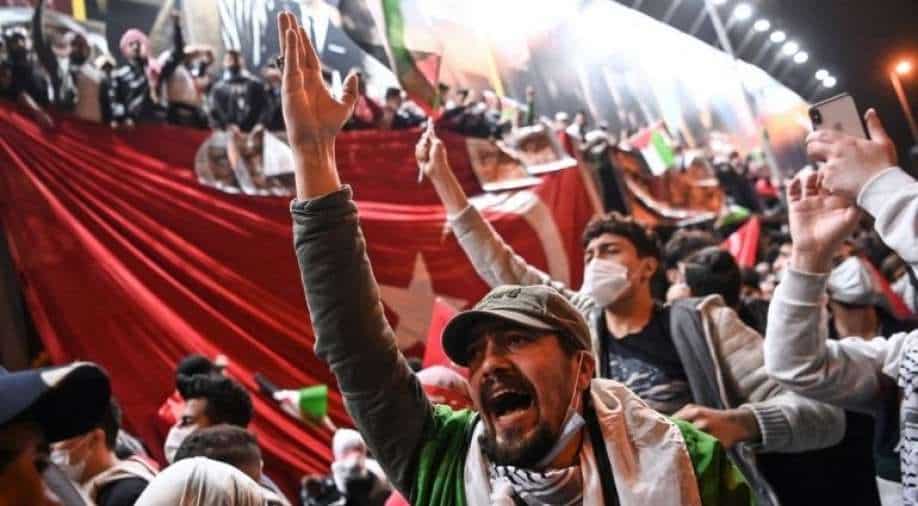 As the violence escalates in the Middle East, turmoil of a different kind is growing across the Atlantic.

Dan Kleinman does not know quite how to feel.

As a child in the New York City borough of Brooklyn, he was taught to revere Israel as the protector of Jews everywhere, the “Jewish superman who would come out of the sky to save us” when things got bad, he said.

It was a refuge in his mind when white supremacists in Charlottesville, Virginia, chanted “Jews will not replace us,” or kids in college grabbed his shirt, mimicking a “South Park” episode to steal his “Jew gold.”

But his feelings have grown muddier as he has gotten older, especially now as he watches violence unfold in Israel and Gaza. His moral compass tells him to help the Palestinians, but he cannot shake an ingrained paranoia every time he hears someone make anti-Israel statements.

“It is an identity crisis,” Kleinman, 33, said. “Very small in comparison to what is happening in Gaza and the West Bank, but it is still something very strange and weird.”

As the violence escalates in the Middle East, turmoil of a different kind is growing across the Atlantic. Many young American Jews are confronting the region’s long-standing strife in a very different context, with very different pressures, from their parents’ and grandparents’ generations.

The Israel of their lifetime has been powerful, no longer appearing to some to be under constant existential threat. The violence comes after a year when mass protests across the United States have changed how many Americans see issues of racial and social justice. The pro-Palestinian position has become more common, with prominent progressive members of Congress offering impassioned speeches in defense of the Palestinians on the House floor. At the same time, reports of anti-Semitism are rising across the country.

Divides between some American Jews and Israel’s right-wing government have been growing for more than a decade, but under the Trump administration those fractures that many hoped would heal became a crevasse. Politics in Israel have also remained fraught, as Prime Minister Benjamin Netanyahu’s long-tenured government forged allegiances with Washington. For young people who came of age during the Trump years, political polarization over the issue only deepened.

Many Jews in America remain unreservedly supportive of Israel and its government. Still, the events of recent weeks have left some families struggling to navigate both the crisis abroad and the wide-ranging response from American Jews at home. What is at stake is not just geopolitical, but deeply personal. Fractures are intensifying along lines of age, observance and partisan affiliation.

In suburban Livingston, New Jersey, Meara Ashtivker, 38, has been afraid for her father-in-law in Israel, who has a disability and is not able to rush to the stairwell to shelter when he hears the air-raid sirens. She is also scared as she sees people in her progressive circles suddenly seem anti-Israel and anti-Jewish, she said.

Ashtivker, whose husband is Israeli, said she loved and supported Israel, even when she did not always agree with the government and its actions.

“It’s really hard being an American Jew right now,” she said. “It is exhausting and scary.”

Some young, liberal Jewish activists have found common cause with Black Lives Matter, which explicitly advocates for Palestinian liberation, concerning others who see that allegiance as anti-Semitic.

The recent turmoil is the first major outbreak of violence in Israel and Gaza for which Aviva Davis, who graduated this spring from Brandeis University, has been “socially conscious.”

“I’m on a search for the truth, but what’s the truth when everyone has a different way of looking at things?” Davis said.

Alyssa Rubin, 26, who volunteers in Boston with IfNotNow, a network of Jewish activists who want to end Jewish American support for Israeli occupation, has found protesting for the Palestinian cause to be its own form of religious observance.

She said she and her 89-year-old grandfather ultimately both want the same thing, Jewish safety. But “he is really entrenched in this narrative that the only way we can be safe is by having a country,” she said, while her generation has seen that “the inequality has become more exacerbated.”

In the protest movements last summer, “a whole new wave of people were really primed to see the connection and understand racism more explicitly,” she said, “understanding the ways racism plays out here, and then looking at Israel/Palestine and realizing it is the exact same system.”

But that comparison is exactly what worries many other American Jews, who say the history of white American slaveholders is not the correct frame for viewing the Israeli government or the global Jewish experience of oppression.

“The reaction today is different because of what has occurred with the past year, year and a half, here,” Fellman said. “As a Jewish community, we are looking at it through slightly different eyes.”

Nearby at Sha’arei Torah Orthodox Congregation of Syracuse, teenagers were reflecting on their visits to Israel and on their family in the region.

“They see it as Hamas being a terrorist organization that is shooting missiles onto civilian areas,” Rabbi Evan Shore said. “They can’t understand why the world seems to be supporting terrorism over Israel.”

In Colorado, a high school senior at Denver Jewish Day School said he was frustrated at the lack of nuance in the public conversation. When his social media apps filled with pro-Palestinian memes last week, slogans like “From the river to the sea” and “Zionism is a call for an apartheid state,” he deactivated his accounts.

“The conversation is so unproductive, and so aggressive, that it really stresses you out,” Jonas Rosenthal, 18, said. “I don’t think that using that message is helpful for convincing the Israelis to stop bombing Gaza.”

Ari Hart, 39, an Orthodox rabbi in Skokie, Illinois, has accepted the fact that his Zionism makes him unwelcome in some activist spaces where he would otherwise be comfortable. College students in his congregation are awakening to that same tension, he said. “You go to a college campus and want to get involved in anti-racism or social justice work, but if you support the state of Israel, you’re the problem,” he said.

Hart sees increasing scepticism in liberal Jewish circles over Israel’s right to exist. “This is a generation who are very moved and inspired by social justice causes and want to be on the right side of justice,” Hart said. “But they’re falling into overly simplistic narratives, and narratives driven by true enemies of the Jewish people.”

Overall, younger American Jews are less attached to Israel than older generations: About half of Jewish adults under 30 describe themselves as emotionally connected to Israel, compared with about two-thirds of Jews over age 64, according to a major survey published last week by the Pew Research Center.

And though the US Jewish population is 92% white, with all other races combined accounting for 8%, among Jews ages 18 to 29 that rises to 15%.

In Los Angeles, Rachel Sumekh, 29, a first-generation Iranian American Jew, sees complicated layers in the story of her own Persian family. Her mother escaped Iran on the back of a camel, traveling by night until she got to Pakistan, where she was taken in as a refugee. She then found asylum in Israel. She believes Israel has a right to self-determination, but she also found it “horrifying” to hear an Israeli ambassador suggest other Arab countries should take in Palestinians.

“That is what happened to my people and created this intergenerational trauma of losing our homeland because of hatred,” she said.

The entire situation feels too volatile and dangerous for many people to even want to discuss, especially publicly.

Violence against Jews is increasingly close to home. Last year the third-highest number of anti-Semitic incidents in the United States were recorded since the Anti-Defamation League began cataloging them in 1979, according to a report released by the civil rights group last month. The ADL recorded more than 1,200 incidents of anti-Semitic harassment in 2020, a 10% increase from the previous year. In Los Angeles, the police are investigating a sprawling attack on sidewalk diners at a sushi restaurant Tuesday as an anti-Semitic hate crime.

Outside Cleveland, Jennifer Kaplan, 39, who grew up in a modern Orthodox family and who considers herself a centrist Democrat and a Zionist, remembered studying abroad at Hebrew University in 2002, and being in the cafeteria minutes before it was bombed. Now she wondered how the Trump era had affected her inclination to see the humanity in others, and she wished her young children were a bit older so she could talk with them about what is happening.

Esther Katz, the performing arts director at the Jewish Community Center in Omaha, Nebraska, has spent significant time in Israel. She also attended Black Lives Matter protests in Omaha last summer and has signs supporting the movement in the windows of her home.

She has watched with a sense of betrayal as some of her allies in that movement have posted online about their apparently unequivocal support for the Palestinians and compared Israel to Nazi Germany. “I’ve had some really tough conversations,” said Katz, a Conservative Jew. “They’re not seeing the facts, they’re just reading the propaganda.”

Her three children, who range in age from 7 to 13, are now wary of a country that is for Katz one of the most important places in the world. “They’re like, ‘I don’t understand why anyone would want to live in Israel, or even visit,’” she said. “That breaks my heart.”