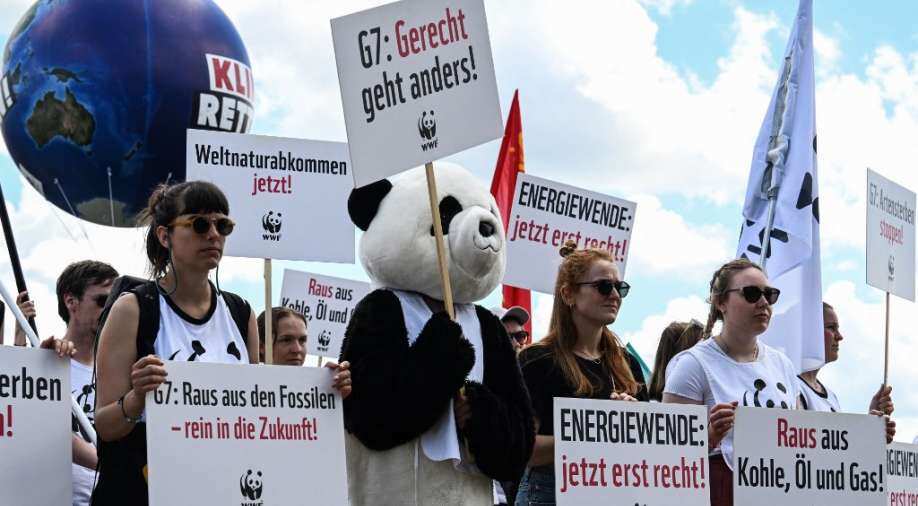 Protest ahead of G7 Summit in Munich Photograph:( AFP )

On Sunday, German Chancellor Olaf Scholz will host this year's G7 summit of leaders from France, the United Kingdom, Italy, Japan, Canada, and the United States

This weakened, the Group of 7 (G7) countries, the world’s wealthiest, will converge in Germany’s Bavarian Alps to discuss pressing matters like the Russian invasion of Ukraine, sanctions on Russian oil, economic and environmental crises.

On Sunday, German Chancellor Olaf Scholz will host this year's G7 summit of leaders from France, the United Kingdom, Italy, Japan, Canada, and the United States, at a five-star hotel in Elmau.

Apart from that, other countries such as India, Argentina, Indonesia, Senegal and South Africa have also been invited as part of the grouping’s efforts to broaden the engagement.

Though Ukraine will be the top of the agenda, there are also other pressing issues that will be discussed.

According to Politico, US and other West allies have expressed disappointment that their sanctions are being skirted by countries like India and China—who have turned out to be the biggest buyers of Russian crude due to the discounts being offered by Moscow.

US Treasury Secretary Janet Yellen has proposed to tackle this issue with a price cap, meaning the West might lift the embargo for those countries that accepted to only buy Russian oil at an agreed maximum price.

US officials claim that Russia and its oil-purchasing partner countries are struggling to find insurance for tankers, and that the price cap can be used as a leverage in exchange for sanctions relief.

At the G7 summit, the German government intends to promote international climate cooperation by establishing a climate club. This club is envisioned to foster the implementation of the Paris climate goals, and better coordinate carbon pricing and other schemes for reducing emissions.

A bigger session with the invited countries and international organisations will discuss ways to make a “clean and just transition to climate neutrality”.

The countries will also deliberate on ways to secure energy supplies and control the global soaring fuel prices. They will also brainstorm on the COVID-19 pandemic, strengthening preparedness and response, and improving the global health architecture.

They will also discuss the darkening global economic outlook, the official said - the challenge being controlling government spending without sending the economy into shock.