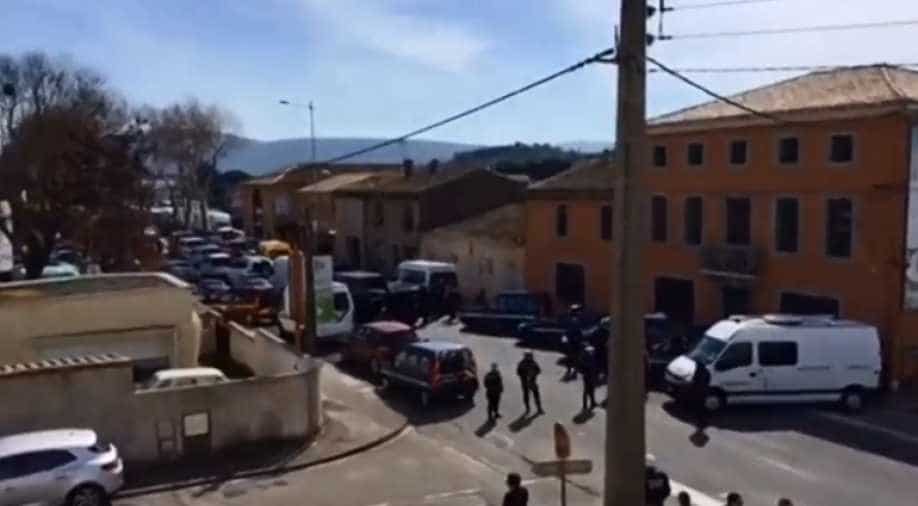 Police on the street outside the Super U Supermarket in Trebes, France where people are being held hostage. Photograph:( Reuters )

A woman who was living with the attacker who killed three people at a supermarket in southern France's Trebes has been detained, a prosecutor said on Friday.

Francois Molins, the prosecutor said gunman Radouane Lakdim had claimed to be a soldier for the terror group Islamic State (IS) while storming the Super U market in the town before he was killed by police.

A gunman killed three people in southwestern France on Friday as he held up a car, fired on police and seized hostages in a supermarket, screaming "Allahu Akbar" before security forces stormed the building and killed him, authorities said.

Sixteen other people were wounded, including two who were seriously hurt, in what President Emmanuel Macron called an act of "Islamist terrorism".

It took three hours to bring the situation under control when the police shot dead the gunman in a cross firing. Two more were later confirmed dead by the police.

Also, a French policeman shot by the gunman after swapping himself for a hostage in a siege at a supermarket in southwest France is "fighting for his life", President Emmanuel Macron said.

Arnaud Beltrame, 45, was among a group of officers who rushed to the scene in the town of Trebes after the attacker, who claimed allegiance to the Islamic State group, stormed the store and fired on shoppers and staff before taking them hostage.